World Trade Organization (WTO)'s Appellate Body based in Geneva has been made defunct for now. WTO's Appellate Body, a standing body of seven persons that hears appeals from reports issued by Dispute Resolution Panels in disputes brought by WTO Members was established in 1995 under Article 17 of the Understanding on Rules and Procedures Governing the Settlement of Disputes (DSU).

In official statement, website of WTO states, "Given the ongoing lack of agreement among WTO Members regarding the filling of Appellate Body vacancies, there is no Appellate Body Division available at the current time to deal with the appeal."

On receiving the request of a complaining party, the Dispute Settlement Body (DSB) establishes a Dispute Resolution Panel to hear and decide a dispute. The DSB does this by a process called the reverse consensus. The establishment of a Panel under the WTO, DSU regime is ‘automatic’. As a rule, Panels consist of three persons, who are not nationals of the Members involved in the dispute. These persons are often trade diplomats or government officials. Academicians and lawyers generally serve as Panel members. The terms of reference of the Panel are determined by the request for the establishment of a Panel, which identifies the dispute in question and the provisions of the covered agreements allegedly breached. It is the task of Panels to make an objective assessment of the facts of the case and the applicability of and conformity with the relevant covered agreements. The Panel is not a permanent body.

The WTO dispute settlement system is a government-to-government dispute settlement system for disputes concerning rights and obligations of WTO Members. Therefore, only governments are provided access to bring and adjudicate their claims before the WTO. The regime excludes within its purview the rights of individual parties, whose claims must be espoused by their respective states in-order to attain the valid locus to present their case before the WTO.

With regard the jurisdiction of the WTO dispute settlement system, it must be noted that the system is confined to contentious jurisdiction. It does not have advisory jurisdiction.

It has pointed out errors in the interpretation of WTO Agreements. It has complaints against errors by Appellate Body concerned with antidumping, countervailing duties, technical barriers to Trade and safeguard tariffs. Notably, Lighthizer used to represent the steel industry which sought tariff protection through trade remedies. USA's trade remedies to the tune of 20-70 percent (by import coverage) in the steel sector were subject to a formal WTO dispute during 1999-2019. The USTR Report is available   at: https://ustr.gov/sites/default/files/Report_on_the_Appellate_Body_of_the_World_Trade_Organization.pdf

Significantly, filing of appeals has not stopped. Even USA has been filing appeals. Most recently, it notified to the Dispute Settlement Body on 26 October, 2020 of its decision to appeal the Dispute Resolution Panel report in the case brought by China in “United States — Tariff Measures on Certain Goods from China”. 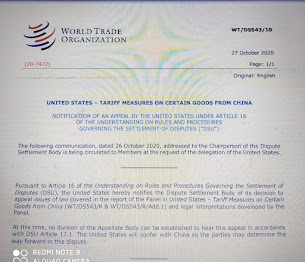 On October 27, 2020, WTO released its notification along with the communication from USA, addressed to the Chairperson of the Dispute Settlement Body which has been circulated to Members at the request of the delegation of the United States. The communication reads: "Pursuant to Article 16 of the Understanding on Rules and Procedures Governing the Settlement of Disputes (DSU), the United States hereby notifies the Dispute Settlement Body of its decision to appeal issues of law covered in the report of the Panel in United States – Tariff Measures on Certain Goods from China (WT/DS543/R & WT/DS543/R/Add.1) and legal interpretations developed by the Panel. At this time, no division of the Appellate Body can be established to hear this appeal in accordance with DSU Article 17.1. The United States will confer with China so the parties may determine the way forward in this dispute." The Dispute Resolution Panel report was circulated to WTO members on 15 September, 2020.
The report observed that "Under Article 3.8 of the DSU, in cases where there is an infringement of the obligations assumed under a covered agreement, the action is considered prima facie to constitute a case of nullification or impairment. The Panel concludes that, to the extent that the measures at issue are inconsistent with certain provisions of the GATT 1994, they have nullified or impaired benefits accruing to China under that agreement within the meaning of Article XXIII:1(a) of the GATT 1994. 8.4." It further states: "Pursuant to Article 19.1 of the DSU, the Panel recommends that the United States bring its measures into conformity with its obligations under the GATT 1994."  The 66 page long report is available at:https://www.wto.org/english/tratop_e/dispu_e/543r_e.pdf alonwith a Addendum to the Panel's Report which is available at: https://www.wto.org/english/tratop_e/dispu_e/543r_a_e.pdf

Whenever it becomes functional again, the Appellate Body can uphold, modify or reverse the legal findings and conclusions of such Dispute Resolution Panels like it did during January 1, 1995- December 10, 2019. The Appellate Body Reports, once adopted by the Dispute Settlement Body (DSB), must be accepted by the parties to the dispute.

Hi,
I having many kinds of knowledge from your blog.. keep sharing ! much helpful for more person Proprietorship Firm Registration Services in bangalore new business registration bangalore click on it

Scatter – Scatter symbols 카지노사이트 can land in any position on the reels. Scatter pays normally reward you with a payout multiplied by your complete bet, distinction to|not like} commonplace symbol payouts, that are multiplied by your line bet only. In many on-line slots scatters, these symbols are the important thing} to triggering free spins or bonus rounds. We accumulate information of our reel spins and outcome patterns. It would be useful if a person who's a software engineer working for a slot machine producer may add the explaining why many people experienced slot machine play not based mostly on the RNG. From the third to sixth free spin bonus symbol lacking a number of} occasions in a row as a "teaser" to taking again all winnings and more after a bonus win.