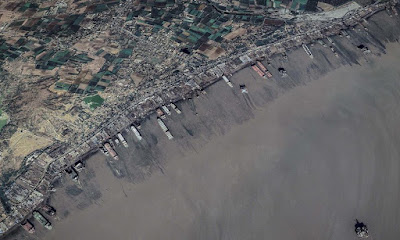 Now that parliamentarian Ahmed Patel is no more, it germane to recollect that in 2015, on the eve of Labour day, he had raised the issue of inhuman working and living conditions of inter-state migrant workers at Ship-breaking yard, Alang beach, Bhavnagar, Gujarat in Rajya Sabha.

I would like to raise the issue of the condition of the workers in Alang’s Shipbreaking yards. In a study commissioned by the National Human Rights Commission, it was found that the costs to workers health and the environment were alarming. There are close to 35,000 migrant workers, but the authorities have only installed 12 showers and 6 toilets, meaning most workers would have to defecate in the open. Let us hope that Swach Bharat reaches here.

The yards have taken the lives of 470 people since 1983. These figures are at best a rough estimate, as the impact of the long-term exposure to chemicals as a result of ship-breaking was not taken into consideration. The National Institute of Occupational Health would that 15 out of 94 examined workers showed signs of disease caused by working with asbestos. The health facilities there are also understaffed and under-stocked. This is a major concern, as the work that is done is Alang can result in serious injuries, which require immediate medical attention.

The workers don’t receive any proper safety training and are not given proper protective gear. Very often these workers don’t receive their wages on time. The study has brought to notice what we have always known, that the conditions in these yards are terrible for the worker, and the regulators have all turned a blind eye.

I urge the Government to take necessary steps to ensure the basic rights of these labourers are safeguarded, and that the most basic human dignities are afforded to these people.