Ganga river basin aporoach and the fast of Sant Atmabodhananda

Amidst crucial polling in Varanasi parliamentary constituency and in some 238 other constituencies in nine States, Prime Minister Narendra Modi reached out to Sant Atmabodhananda, a disciple of Swami Shivananda of Matri Sadan Ashram, Haridwar by sending Rajiv Ranjan Mishra, Director General of National Mission for Clean Ganga (NMCG) on the 194th day of his fast demanding Aviral Ganga (unimpeded flow of Ganga). Following written assurances from him Sant Atmabodhananda Jee broke his fast. (Photo:Written assurance) 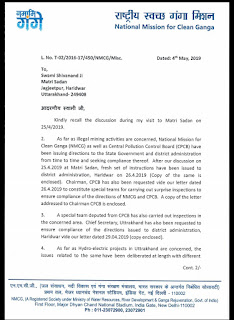 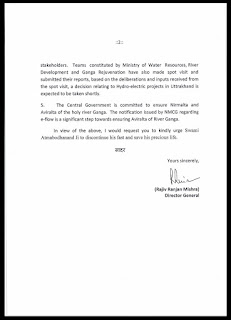 Notably, NMCG was registered as a society on 12th August 2011 under the Societies Registration Act 1860. It used to act as the implementation arm of National Ganga River Basin Authority(NGRBA) which was constituted under the provisions of the Environment (Protection) Act (EPA), 1986 during the tenure of Prime Minister Dr Manmohan Singh. Modi government dissolved  NGRBA with effect from 7th October 2016 and constituted National Council for Rejuvenation, Protection and Management of River Ganga (National Ganga Council) vide notification no. S.O. 3187 (E) dt. 7th October 2016 under EPA 1986.

It envisages five tier structure at national, state and district level to take measures for prevention, control and abatement of environmental pollution in river Ganga and to ensure continuous adequate flow of water so as to rejuvenate the river Ganga.
The structure is as under
1. National Ganga Council under chairmanship of Prime Minister of India
2. Empowered Task Force (ETF) on river Ganga under chairmanship of Union Minister of Water Resources, River Development and Ganga Rejuvenation
3. National Mission for Clean Ganga (NMCG)
4. State Ganga Committees and
5. District Ganga Committees in every specified district abutting river Ganga and its tributaries in the states
NMCG has a two tier management structure and comprises of Governing Council and Executive Committee. Both of them are headed by Director General, NMCG. Executive Committee has been authorized to accord approval for all projects up to Rs 1000 crore. Similar to structure at national level, State Programme Management Groups (SPMGs) acts as implementing arm of State Ganga Committees has been constituted. These institutions attempt to bring all stakeholders on one platform to take a holistic approach towards the task of Ganga cleaning and rejuvenation.

The Director General of NMCG who met Sant Atmabodhananda on 4th May, 2019 is a Additional Secretary in Government of India. For effective implementation of the projects under the overall supervision of NMCG, the State Level Program Management Groups are headed by officials of the Ganga river States.

It is evident that Modi government abandoned the holistic Ganga river basin approach and adopted a narrow Ganga river approach as if the river is only  a pipeline of water.

What Is Ganga River Basin Approach

While the commercial benefits of damming rivers has been talked about a lot, the in-stream and off stream monetary and non-monetary benefits and advantages of flowing rivers has not been assessed so far. Does basin approach mean undertaking that assessment?

The declaration of Ganga River Basin Authority as part of Third Phase of Ganga Action Plan (GAP-III) in the aftermath of the acknowledgment by the Prime Minister's Office saying, "there is a need to replace the current piecemeal efforts taken up in a fragmented manner in select cities with an integrated approach that sees the river as an ecological entity and addresses issues of quantity in terms of water flows along with issues of quality" under Dr Manmohan Singh was long due. But that positon has been abandoned by Modi government to launch the Fourth Phase of Ganga Action Plan (GAP-IV).

Like the earlier phases of Ganga Action Plan, the fourth phase too has failed. The river basin approach affects the quality of surface water, ground water and the survival of natural flow of the rivers in the basin but it was never adopted in practice.

The empty official, ceremonial and ornamental status being accorded to Ganga ahead of elections has become routine.
Even the River Basin approach applied to only 79% of Ganga basin, which is in India. It does not include 13 % of Ganga basin that is in Nepal, 4 % in Bangaldesh and 4 % in Tibet, China. It did not factor in  its relationship with the river systems and with the composite Ganga-Brahmputra-Meghna basin.

The question as to how does Ganga river basin approach affect the policies of Industry, Power, Agriculture, Urban Development, Health and Environment by the central government, the governments of eleven states (Bihar, Chhattisgarh, Haryana, Himachal Pradesh, Jharkhand, Madhya Pradesh, NCT of Delhi, Rajasthan, Uttranchal, Uttar Pradesh and West Bengal), the neighboring countries and industry bodies like CII/FICCI/ASSOCHEM/PHCCI is yet to be addressed.


Given the poor track record of the National Ganga Council like National River Conservation Directorate), it would be naïve to believe that the threats will be identified and mitigated. If the Ganga basin approach is indeed adopted then as per Comptroller Auditor General's audit reports, there is a need to strengthen the environmental clearance process emanating which has consistently been weakened. And enthusiasm about mega projects like Ganga Waterway and 'interlinking of rivers' scheme must factor in the fact that Ganga is more important than development and the ecological entity of the river basin is non-negotiable.

What can be done even under current scheme of things is to review and reverse the policies like Indian Energy Policy because they wete formulated when basin approach was not adopted. Consequently, fragmented river valley project specific clearances are given without any considered sensitivity towards the environmental health of the river ecosystem. An environmental audit of all the industrial activities in the Ganga basin is a must because auditing and accounting are inextricably interlinked, the important pre-requisite for effective environmental auditing is sound environmental accounting.

Data on environmental costs and liabilities can be used for better decision making relating to usage of alternative raw materials, consumption of utilities like water and power, choice of processing technology based on environmental cost of treating discharge into water, adverse environmental aspect and impact on flora fauna and human beings and treatment of byproducts.

In the face of limitations encountered by National Water Quality Assessment Authority, one of the immediate need of the basin is to take urgent steps to restore the water quality by seeking Zero tolerance towards hazardous chemicals, waste water and depletion in the natural flow due to uncalled for hydro projects adversely affects the water quality.

Infact like previous governments, Modi government too has failed to appreciate that water quantity, water quality and land building are inherently linked. Depletion of water quantity leads to deterioration of water quality.  Embanking, diverting and damming of rivers prevents rivers to perform its natural function of land building.The entire Indo-Gangetic plains have been built by river's natural geological function. It is evident that economic planning in Ganga basin is against the water cycle-it is unscientific. Those who accept this situation in a business as usual manner are complicit in what has been termed as The Economics of Innocent Fraud.

Through their sacrifices saints like Baba Nagnath, Swami Nigmanand, Prof. G. D. Agarwal (Swami Sanand) and Sant Atmabodhanand are constantly reminding us of the Tamil proverb saying that "Sea begins in the moutains"-water cycle itself is a living entity. Such struggles and sacrifices merits the salute of not only the sons and daughters of Ganga but also of the entire humanity. As long as Ganga's Avira (unimpeded flow) is impeded such struggles must continue in myriad forms to safeguard the natural right of the river for the benefit of present and future generation of humans and non-human living species.

The author is a co-petitioner in National Green Tribunal on the subject of environmental impact of Ganga Waterway project
Share this article :
Labels: Watershed and River Basins

Great work !!!!Congratulations for this blog

Thanks for sharing. It very useful and great blog for eachone.
Please click here if you wish to receive further offers from us:
Forex Market
Financial Market
Currency Pairs
Currency Trading