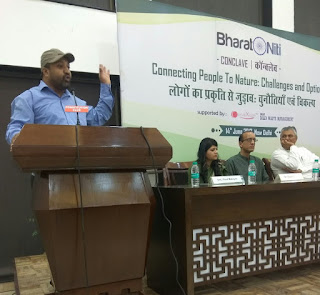 All rivers are natural persons and legal persons, said Dr Gopal Krishna of ToxicsWatch Alliance (TWA)  while praising the Uttarkhand High Court’s decision recognizing river Ganga as a natural person and legal person. It paves the way for correcting the wrongs done to the rivers. He said that every legal wrong must have a legal remedy the court had remedied the wrong done by the Britishers of never seeing nature as a legal entity. He was addressing the audience at a conclave on “Connecting people to nature: Challenges and Options”.

He referred to the Paris Agreement which refers to “Mother Earth” drawing on lessons from Bolivia which recognized the legal right of nature. He said, nature and climate don't respect western notion of national borders, This notion is contrary to the Upanishadic lessons about nature.

He said, Himalaya is in danger. But can it be saved by ignoring the Chinese Himalayan region and saving only the Indian Himalayan region. Can Ganga be saved only be looking at 79 % of Ganga basin which in India? Can we afford to ignore 21 % of Ganga which is in Nepal and Bangaldesh. He urged all the nations involved to rise above the border disputes and save the nature. He opined that ancient beliefs and traditions should be inculcated in the present system where every river is seen as a natural person.

He said that nature should be viewed as the principle amount which is fast receding while people are busy reaping profits from it. He pointed to the fact that the export share of India in the world trade was 25 per cent when the nature was not exploited whereas at present it is only 1-1.5 per cent.

Chaudhary Birender Singh, Union Minister of Steel opined that environmental problems that the world is faced with at present are a result of the Industrial Revolution that took place 300 years ago. Elaborating further, he said the adverse effects of climate change in India were felt only after Industrial Revolution came to the country about 70 years ago. Globally also, in the last 30 years, production has been shifting towards Asia which has negatively impacted the environment.In his speech, he criticised the idea of carbon credits propagated by the western nations as it has only helped in the shifting of responsibility to developing countries. “India used to be the biggest exporter before the advent of Industrial Revolution. Today we produce 100 million tonne crude steel, out of which only 1.5 per cent is exported as after Industrial Revolution, we can only export high-end steel. This is the way Western ideas have had an impact on thinking,” he said.
Pointing to the fact that West is still a well-off society even after they have reduced production, he said this is because research and innovation have become the main sources of their economy. Since India is lacking in these aspects, the West is able to dictate terms to the country. To reverse this situation, he was of the opinion that what is required is a “mind change for the environmentalists.”
He urged for a change in perspective. Quoting an example, he said banned chemicals are still in use in many of the industries. Because of this, it is having an adverse impact on air and water resources. So, what is of utmost importance here is to correct the industry’s mindset. He also spoke about how the Swach Bharat Abhiyan could achieve so much success after it became a “mass movement”. 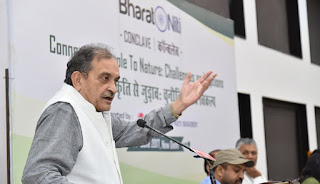 He warned that no mission will be successful if there is an effort made to compartmentalise it. Giving an example, he said as long as the use of solar energy and thermal energy are alternated, India’s energy crisis can never be solved. In his concluding remarks, he urged the scientists and environmentalists to take advantage of India’s vast coastline and bring innovative mechanisms where sea water can be used for drinking and irrigation purposes as it will solve the world’s biggest problem. 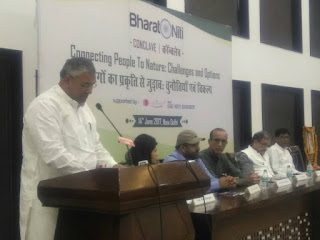 P P Chaudhary, Union Minister for Law and Justice, Electronics and Information Technology said, “Indian environment is in a very sad state.” Drawing on the ancient texts and also from the Directive Principles, he brought to light the fact that India has always given importance to environment and the current government is firmly focused on implementing the Prime Minister’s vision for clean energy. As a result of this, the government has been extensively promoting the use of solar and wind energy.
“In any developing country, energy is very important. India has been reducing its fossil fuel consumption through policy decisions like National Smart Grid. The focus on smart cities will give an impetus to clean energy. The government also comes out with policies on solid waste management from time to time. The difference of all these initiatives will be seen in the coming years,” he said.

Talking on Swach Bharat Mission, he said, “The vision has been converted into mission due to the involvement of the common man.” He also spoke about the focus of the government on hybrid electric vehicles to promote green energy.
On forestation, he said, the Prime Minister’s vision is to increase the forest cover to 33 per cent from the current 24 per cent. He strongly spoke against the use of pesticides in agriculture and said the multinational companies are primarily responsible for introducing all the chemicals that were banned in America in 1972 to India. He also said water conservation is the biggest challenge and the aim should be revive the existing water bodies. Offering an interesting suggestion, he said, “The World Environment Day should be celebrated as a festival every year” so its message is not forgotten. He further opined that the role of technology is very important for the conservation of environment. He lauded the Supreme Court’s decision of paperless courts and said it will go a long way in preventing deforestation. This conclave was organised by Kuldeep Ratnoo of Bharat Niti, a voluntary initiative and his colleagues. It was co-sponsored by Smart Solid Waste Management. The conclave began after paying Tributes to Union Environment Minister, late Anil Madhav Dave.
Share this article :
Labels: Military Mining Industrial Complex

Useful article, thank you for sharing the article!!!