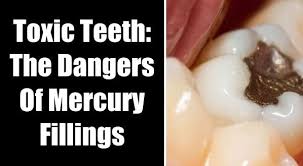 Sir,
This is to draw your attention towards a recent decision by European Union to phase out usage of mercury based dental amalgam among children and pregnant women.  Taking cognizance of incontrovertible scientific and medical evidence and given the fact that India being a signatory to Minamata Convention against mercury pollution, there is a compelling logic for the central and state governments to completely ban them.  It is noteworthy that around 30% of approximately 50-55% of Indians who face tooth decay need dental filling at some stage. This makes them vulnerable to exposure of highly hazardous heavy metal like mercury.
We submit that the medical belief that the placenta protects the foetus from toxins in the bloodstream, which is indeed the case with most chemicals have been given a burial. In the case of methylmercury, the placenta removes it from the mother's bloodstream and concentrates the chemical in the foetus. Thus, the disease manifested its congenital form.
We submit that mercury has toxic effects on the nervous, digestive and immune systems, and on lungs, kidneys, skin and eyes. Mercury is considered by WHO as one of the top ten chemicals or groups of chemicals of major public health concern. People are mainly exposed to methylmercury, an organic compound, when they eat fish and shellfish that contain the compound.

Given the fact that elemental and methylmercury are toxic to the central and peripheral nervous systems, inhalation of mercury vapour can produce harmful effects on the nervous, digestive and immune systems, lungs and kidneys, and may be fatal. The inorganic salts of mercury are corrosive to the skin, eyes and gastrointestinal tract, and may induce kidney toxicity if ingested.

We submit that neurological and behavioural disorders may be observed after inhalation, ingestion or dermal exposure of different mercury compounds. Symptoms include tremors, insomnia, memory loss, neuromuscular effects, headaches and cognitive and motor dysfunction. Mild, subclinical signs of central nervous system toxicity can be seen in workers exposed to an elemental mercury level in the air of 20 μg/m3 or more for several years. Kidney effects have been reported, ranging from increased protein in the urine to kidney failure.
It is noteworthy that Mercury is an element that cannot be destroyed; therefore, mercury already in use can be recycled for other essential uses, with no further need for mercury mining. Mercury use in artisanal and small-scale gold mining is particularly hazardous, and health effects on vulnerable populations are significant. Non-mercury (non-cyanide) gold-extraction techniques need to be promoted and implemented, and where mercury is still used safer work practices need to be employed to prevent exposure.
We submit that the adoption of UN's Minamata Convention on Mercury to protect human health and the environment from anthropogenic emissions and releases of mercury and mercury compounds is relevant with regard to mercury based dental amalgam. Mercury is a persistent pollutant.
It persistence can gauged from the fact that addition of even 0.9 grams of mercury, that is, one minuscule fraction (1/70th) of a teaspoon is enough to contaminate a 25-acre lake, rendering fish contaminated and unsafe to eat. The maximum contaminant level for mercury in drinking water is 2μg/L ( .000002 g/L). [1 g = 1,000,000 μg].
It is noteworthy that just one drop of mercury can poison enough water to fill 10 big tanker trucks which has 89,000 gallons of water. (1 gallon = 3.8 liters). Exposure to mercury – even small amounts – may cause serious health problems, and is a threat to the development of the child in utero and early in life.
The UN treaty opened for signature by countries on 10 October 2013, at a Diplomatic Conference in Kumamoto, Japan. The continued release of mercury into the environment from human activity, the presence of mercury in the food chain, and the demonstrated adverse effects on humans made the governments to agree to the Minamata Convention on Mercury. The Convention obliges government Parties to take a range of actions, including mercury emissions to air and to phase-out certain mercury-containing products.
We submit that a teaspoon of mercury and a teaspoon of water are of the same volume but not the same weight. Density of Mercury is 13.534 g/cm3. There is about 20 drops per cm3. It is not realized as yet that just 1 teaspoon of mercury can poison all the water a family of 4 would use in 63 years.
The treaty got its name from Minamata a city in Japan where Chisso Corporation opened a chemical factory in 1908. The chemical reaction used to produce the acetaldehyde used mercury sulfate as a catalyst. A side reaction of the catalytic cycle led to the production of a small amount of an organic mercury compound, namely methylmercury. This highly toxic compound was released into Minamata Bay from the start of production in 1932 until 1968, when this production method was discontinued. Local public health office in the city discovered an "epidemic of an unknown disease of the central nervous system" in 1956. The city government formed the Strange Disease Countermeasures Committee. The disease later became known as Minamata disease. From around 1950 onward, cats had been seen to have convulsions, go mad and die. Crows had fallen from the sky, seaweed no longer grew on the sea bed and fish floated dead on the surface of the sea. On November 12, 1959, the Ministry of Health and Welfare's Minamata Food Poisoning Subcommittee published its results sating "Minamata disease is a poisoning disease that affects mainly the central nervous system and is caused by the consumption of large quantities of fish and shellfish living in Minamata Bay and its surroundings, the major causative agent being some sort of organic mercury compound." Some 2,265 victims have been officially certified of Minamata disease of which some 1,784 of have died and over 10,000 people have received financial compensation till 2001 from Chisso Corporation in Japan.
We submit that Government of India should initiate a program to phase out use of non-essential mercury-containing products and implement safe handling, use and disposal of remaining mercury-containing products. Mercury is contained in many products, including batteries, measuring devices, such as thermometers and barometers, electric switches and relays in equipment, lamps (including some types of light bulbs), dental amalgam (for dental fillings), skin-lightening products and other cosmetics and pharmaceuticals.
World Health Organization has been providing guidance on identifying populations at risk from mercury exposure, tools to reduce mercury exposure, and guidance on the replacement of mercury-containing thermometers and blood pressure measuring devices in health care. It is promoting the sound management and disposal of health-care waste and has facilitated the development of an affordable, validated, non-mercury-containing blood pressure measuring device.

We submit that so far regulatory agencies in India have failed to protect the food chain from the criminal poisoning seem to waiting for a formal announcement of Minamata like disaster to react.

In view of the above, we urge you to ban use of mercury based dental amalgam in India to safeguard public health of present and future generations.

Certainly, you are Right!!
Thanks for such a pleasant post. It is with a lot of useful information. Keep it up. Are you looking for the best information and suggestions related to Dental Clinic Near Me then visit Studio Smiles NYC.

What is the update to this letter? Are they banned in India now? Do we have safe technologies to take these out?