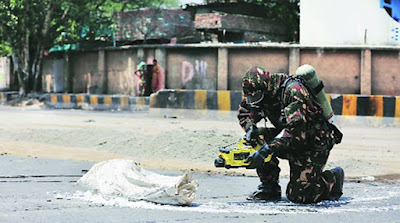 A gas leak from a Tughlakabad container depot in National Capital Territory of Delhi. It is believed to be leakage of Chloromethyl Pyridine, a toxic chemical used in manufacturing of pesticides. Some 300 students of Rani Jhansi school have been exposed around seven in the morning hours when students complained about irritation in their eyes. Initially, some 27 students were admitted in Batra hospital, 53 in ESI hospital and 5 in Apollo hospital and some 25 in Hamidia hospital but later some 100 students have been admitted in different hospitals.  Notably, Tughlakabad container depot has been infamous for transport of  waste oil which is a hazardous waste in the past. It has been the subject matter of the hazardous waste case in Supreme Court.

Delhi Government has ordered an inquiry into the incident. ci Union Health Minister who is not a member of Cabinet Commitee on Economic Affairs (CCEA) has sent his prayers to those affected. Union Environment Minister who is also not a member of CCEA is yet to come into the picture. It is the decisions of supreme decision making body like CCEA that sets priorities with regard to industrial activity in the country. Such incidents reminds people of the lessons from the industrial disaster of Bhopal which underline the need to ban trade in hazardous chemicals and hazardous waste. It is not a coincidence that Indian delegation at a UN Meeting in Geneva that concluded on 5 May took the untenable position that India can manage foreign hazardous waste because it has the technology and welcomed waste dumping.  This incident of the leak demonstrates the emptiness of such claims.

The public health crisis caused by such leaks can be traced to lax licensing, clearances and weak regulatory and compliance monitoring procedures.The institutional accountability for such leaks must be fixed and those who are guilty must be made to face punitive measures to ensure that defaulters do not go scot free. The responsibility of Tughlakabad container depot must be assessed to ascertain the root cause of the leak. It is hoped that the findings of the inquiry into incident will see the light of the day within a week. It must be remembered that Madhya Pradesh Government has got the report of the judiciary inquiry commission into the Bhopal disaster but it is reluctant to make it public. Such approach does not inspire confidence in government's orders with regard to inquiry.