This is to draw your immediate intervention to make India’s capital free of harmful asbestos based products in view of the statement of Shri Anil Madhav Dave, Union Minister of Environment, Forest & Climate Change Government of India interview with  The  Times  of  India said “Since the use of asbestos is affecting human health, its use should gradually be minimised and eventually end. As far as I know, its use is declining. But it must end…”[1]

This is in keeping with the 19 page long Vision Statement on Environment and Human Health of your ministry which states ‘4.3.1 Environmental epidemiological studies are required to be carried out near to industrial estates and hazardous waste disposal sites to estimate the extent of health risks including from asbestos. Alternatives to asbestos may be used to the extent possible and use of asbestos may be phased out’.” The relevant URL of Vision Statement on Environment and Human Health is available at www.envfor.nic.in/sites/default/files/visenvhealth.pdf 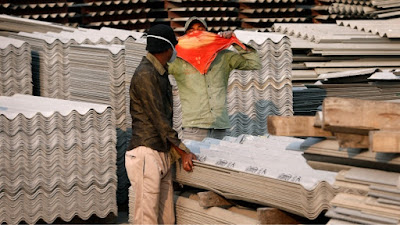 We submit that our country is consuming 15 % of the total world asbestos production, as per US Geological Survey estimates. As per 2014 data, India used 379,000 tonnes of asbestos, out of which only 270 tonnes were mined in mines whose leases have not yet expired. It has technically banned asbestos mining but it continues to procure it from countries like Russia, Brazil, Kazakhstan and China. The minister’s statement reveals that NHRC is right in its direction which reads: “Replace the asbestos sheets roofing with roofing made up of some other material that would not be harmful to inmates.”[2] NHRC has already decided that asbestos harmful to human health.  It is evident that the NHRC considers asbestos sheets as harmful. It is noteworthy that asbestos fibers used for making asbestos based products like asbestos cement roofs etc is a ticking time bomb for lungs which causes preventable but incurable diseases and deaths.

We submit that these companies should be asked to switch non-asbestos materials in the light of the fact that some 48 countries have banned white asbestos mineral fibers that causes incurable lung cancer according to World Health Organisation (WHO). This will go a long way in combating fatal diseases caused corporate crimes and in making national capital the first region in the country to adopt zero-tolerance policy towards the killer asbestos fibers.

We submit that Government should be asked to ensure decontamination of asbestos from the old schools and ensure that no asbestos roofs or any asbestos material is used in any school or public or private building in Delhi.

We submit that Delhi’s Govt should be asked to take steps to ensure that only non-asbestos building material and water supply pipes etc are procured. A register of asbestos laden buildings and victims of asbestos related diseases should be created. A compensation fund for the victims of primary and secondary exposure must be established.

We submit that substitutes for asbestos based products are not limited to products that simply replace asbestos with another material (e.g., PVA and cellulose in fiber-cement roofing sheet).  There are also a number of wholly different products that can replace the asbestos products. It is noteworthy that asbestos of all kinds including white chrysotile asbestos is banned in some 50 countries.

We submit that while asbestos mining is technically banned in the country, in a shocking case of inconsistency India continues to import asbestos from asbestos producing countries like Russia, Brazil Kazakhstan and China. Trade in asbestos waste (dust and fiber) is also banned.

We submit that by letter dated 9th July, 1986  from Union Ministry of Steel, Mines & Coal, Government of India with reference no. 7/23/84-AM-III/AM-VI there is a stay on grant of new mining lease for asbestos mineral and renewal of the leases. Reiterating the same in June 1993, central government stopped the renewal of existing mining leases of asbestos. The mining activity was banned by Union Ministry of Mines.

It is strange that while mining of asbestos is banned in the country due to adverse health impact, the same is being imported from Russia, Kazakhstan, Kyrgyzstan and Zimbabwe. It high time government stopped practicing such untenable policies displaying manifest double standards.

We submit that following vibrant struggle in villages of Muzaffarpur and Vaishali in Bihar and Bargarh in Odisha stopped the establishment of asbestos based plants.  There are struggles going in Bhojpur, Bihar against such heavily polluting factories.

In view of the same, if the Commission can recommend ban on procurement of asbestos based products by government agencies it will send a clear signal that it is sensitive towards the health of present and future citizens of national capital.

We will be happy to share relevant information in this regard.