30th May, 2016 and a news report in The Pioneer regarding the same (Okhla plant’s carbon credit move appalls many, 3rd June, 2016), the report quotes you.
Kindly allow me to reproduce the relevant text of the news report which reads: Dr Subharta Bose, chairman, NCDMA told The Pioneer that we are examining the report and the procedure will take time. “Although there is no big role of the NCDMA after given the approval to host waste to energy plant but our mechanism is very transparent,” said Dr Bose.
I submit that in view of your comments the certificate of Host Country Approval dated 15th May, 2007 given to the project of The Timarpur Waste Management Company Pvt. Ltd. (TWMCPL), a subsidiary of Infrastructure Leasing & Financial Services Ltd. (IL&FS) is quite relevant and merits your attention. This approval was given after is consideration by the NCDMA on 30th March, 2007.  It was confirmed based on submissions by the company prior to approval and prior to registration with UNFCCC’s CDM Executive Board that “The project contributes to Sustainable Development in India”. Post registration changes establish beyond any reasonable doubt that the project does not contribute to Sustainable Development and sets a very bad precedent for the country in particular. It puts the communities and the ecosystem of Okhla, Delhi to enormous risk which cannot be deemed acceptable.
I submit that the country approval laid down certain specific conditions which are required to be complied with “during the lifetime of the project”. The approval conditions stated categorically that “This approval is not transferrable. The authority reserves the right to revoke this Host Country Approval if the conditions stipulated in this approval are not complied with to the satisfaction of the National CDM Authority.”
I submit that the conditions stipulated in the approval certificate have not been complied with the project in this question. It must be noted that the approval was given to The Timarpur Waste Management Company Pvt. Ltd. (TWMCPL), a subsidiary of Infrastructure Leasing & Financial Services Ltd. (IL&FS) but the approval was transferred to Timarpur-Okhla Waste Management Co Pvt Ltd (TOWMCL) of M/s Jindal Urban Infrastructure Limited (JUIL), a company of M/s Jindal Saw Group Limited. This clearly implies that the conditions have been violated.
Besides this the approval certificate states “The TOWMCL shall obtain all statutory clearances and other approvals as required from the competent authorities for setting up of the project.” It is evident from the Validation opinion for post registration changes provided by Det Norske Veritas (DNV) that the “statutory clearances” which were obtained pre registration were not and has not been obtained post registration.  This also clearly shows that Host Country Approval “conditions stipulated” in the approval have not been complied with. This creates a full proof compelling logic for the National CDM Authority which admittedly has the “right to revoke this Host Country Approval” to revoke the approval granted to this project.
I submit that the truth about this controversial and questionable project is out in public domain. It is just a matter of time before it triumphs as well.
In view of the above submissions, I am hopeful that your considered intervention will set the matters right and save the public health and ecosystem for the present and future generations.
I will be happy top share more information and relevant documents in this regard.
Thanking you
Yours faithfully
Dr Gopal Krishna
Director
ToxicsWatch Alliance (TWA)
Mb: 08227816731, 09818089660
E-mail-1715krishna@gmail.com
Web: www.toxicswatch.org

This is to draw your attention towards the grave and inexcusable admitted deviation from approved and validated technology in the matter of Clean Development Management (CDM) project by Delhi’s Timarpur-Okhla Waste Management Co Pvt Ltd (TOWMCL) of M/s Jindal Urban Infrastructure Limited (JUIL), a company of M/s Jindal Saw Group Limited.

Having studied the second monitoring report of the project dated 15th October, 2015 and the relevant pages on the website of the Board, it is learnt that as of 30th May, 2016, “CDM Issuance request” for CERs is awaited. As you are aware Issuance is the instruction by the CDM Executive Board to the CDM Registry Administrator to issue a specified quantity of CERs, lCERs, or tCERs for a project activity or PoA into the pending account of the Board in the CDM registry, for subsequent distribution to accounts of project participants in accordance with the CDM rules and requirements. These reports for UNFCCC reference number of the project activity 1254 are available on UNFCCC’s CDM Executive Board’s website.

In view of the above facts and violations on numerous counts, I wish to request you to ensure that UNFCCC’s CDM Executive Board desists from issuance of CERs to this plant because you have a legal and moral obligation to save present and future generation of residents from being enveloped in a toxic gas chamber as a consequence of use of such hazardous incinerator technology adopted for generating energy from waste which admittedly has hazardous waste characteristics.

I will be happy to share more information and relevant documents since March 2005 till date. 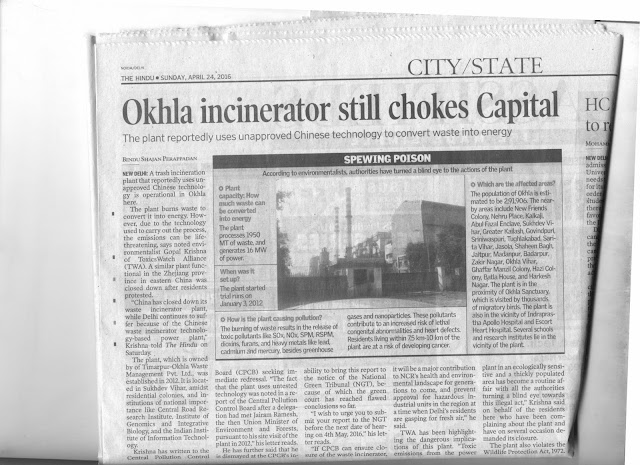 The author has done a great job. I found it comprehensively informative! If you are looking for a more knowledgeable article just have a look - new boiler quote

Choosing a professional boiler repair company can go a long way in ensuring the efficiency of the boiler many years to come. What is worse, this could happen when there are no reliable Boiler Service Contractors available. The type of work that will be done would be questionable and then there would be the large Gas Boiler Repair bill to pay all of a sudden. For the best boiler installation service in Paisley cal the Touch Of Heat Professionals.