Central Government proposes to issue in exercise of the powers conferred by sections 3, 6 and 25 of the Environment (Protection) Act, 1986 (29 of 1986) and in supersession of the Municipal Solid Wastes (Management and Handling) Rules, 2000 except as respects things done or omitted to be done before such suppression, it is hereby published for the information of the public likely to be affected thereby; and the notice is hereby given that the said draft notification shall be taken in to consideration on or after the expiry of a period of sixty days from the date on which copies of this notification as published in the gazette of India are made available to public; 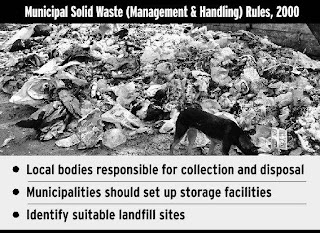 Objections or suggestions on the proposals contained in the draft notification, if any may be addressed, within the period so specified, to the Secretary, Ministry of Environment, Forest and Climate Change, Indira Paryavaran Bhawan, Jor bagh Road, New Delhi- 110 003 or electronically at e-mail addressed : bnsinha@gov.in, shard.sapra@nic.in; The objections and suggestion which may be received from any person with respect to the said draft rules before the expiry of the period so specified shall be considered by the Central Government.