With reference to my previous letter dated December 2014, this is submit that I have learnt it officially that Danish end-of-life toxic ship MV Clipper (IMO No. 9232319) in Bhavnagar waters as of today, I wish to draw your immediate attention towards the phenomena of fake document factories at work in Alang in particular and shipping industry in general.

I have reliably learnt that concerned officials are expected to board the ship from tomorrow onwards for inspection. I have repeatedly been informed that these officials do not have the competence to verify the authenticity of documents. I have officially demonstrated it in the past and the same has officially been acknowledged but no remedial measures have been taken so far.

I submit that after my complaint standing monitoring committee on ship breaking yards, Union Ministry of Environment & Forests and officials of Hazardous Substances Management Division undertook a site visit and submitted a report requesting Directorate General of Shipping, Union Ministry of Shipping to develop procedure for scrutiny of ship's certificates.

The relevant part of the report of the standing committee reads: “The issue regarding the submission of fake certificates by the ship owners/agents came up for discussion. The committee members suggested that since GMB/Customs were not able to verify the authenticity/genuineness of ship’s registry/flag in the fast in respect of some ships referred to them, this task in respect of each ship may be referred to the DG Shipping under the Ministry of Shipping to do such verification henceforth. GMB has reported that they will consult this matter with their senior officers and revert back to MoEF within 7 days.  Subsequently, the GMB officials informed MoEF that the suggestion of the committee is acceptable to them subject to such verification by DG Shipping is done within a period of 2 working days.  If no information is received from the DG Shipping within 2 working days, it will be presumed that the certificate submitted is authentic and genuine.” Such callous approach of GMB is quite alarming merits serious attention and probe.

I submit that the official procedure is as under:
1.         Gujarat Maritime Board (GMB) to send details of ship owner and copies of statutory and copies of the statutory certificates to the local Mercantile Marine Department (MMD)
2.         The Principal Officer of the said Mercantile Marine Department (MMD) will verify the authenticity through Equasis website and other available resources and inform GMB with reference to authenticity of certificates.
3.         In case certificates cannot be verified by MMD, the MMD will forward the same to the Port State Control (PSC) Cell of the Directorate justifying the inability. PSC Cell of the Directorate will take the matter with the concerned Flag Administration and verify authenticity of the certificates and convey the same to the GMB with copy to GMB.

I submit that a copy of the procedure was sent to Principal Officer of the said Mercantile Marine Department (MMD), Kandla.

I submit that in a notification [F.No. SR-12020/2/2011-MG] issued in the Gazette of India dated April 20, 2012, it is stated, “The Indian Coastguard and Indian Navy may also check and verify the protection and indemnity insurance and the name of Classification Society of the vessel, if considered necessary. If the vessel is not in possession of a valid protection and indemnity insurance and certificate of class, the matter shall be reported to the Directorate General of Shipping immediately, for appropriate action under the Act.”

I submit that besides this as per an official communication Directorate General of Shipping, Ministry of Shipping [No.-NT (2)/Correspondent/12] dated 06/08/2013 on the subject of Non-IACS Classed old ships proceeding to ship breaking yard stated, “the concerned Coastal State/Ports has the responsibility to protect its coastline against shipping casualties which may/may not cause pollution…”. IACS stands for Indian Association of Classification Societies.

It further provided following safeguards required to be taken prior to the entry of such ship into their ports, or transiting through such ports or ship-breaking yards as the case may be, for the purpose of ship breaking:
1.         Such ships to carry a valid Third Party Insurance cover issued by the IG Club or otherwise (as acceptable to the Directorate of Shipping).
2.         Such ships to have in place valid single voyage permission from the Flag Administration and Certificate of Inspection issued by the authorized Recognized Organization (RO) of the Flag Administration of such ships. 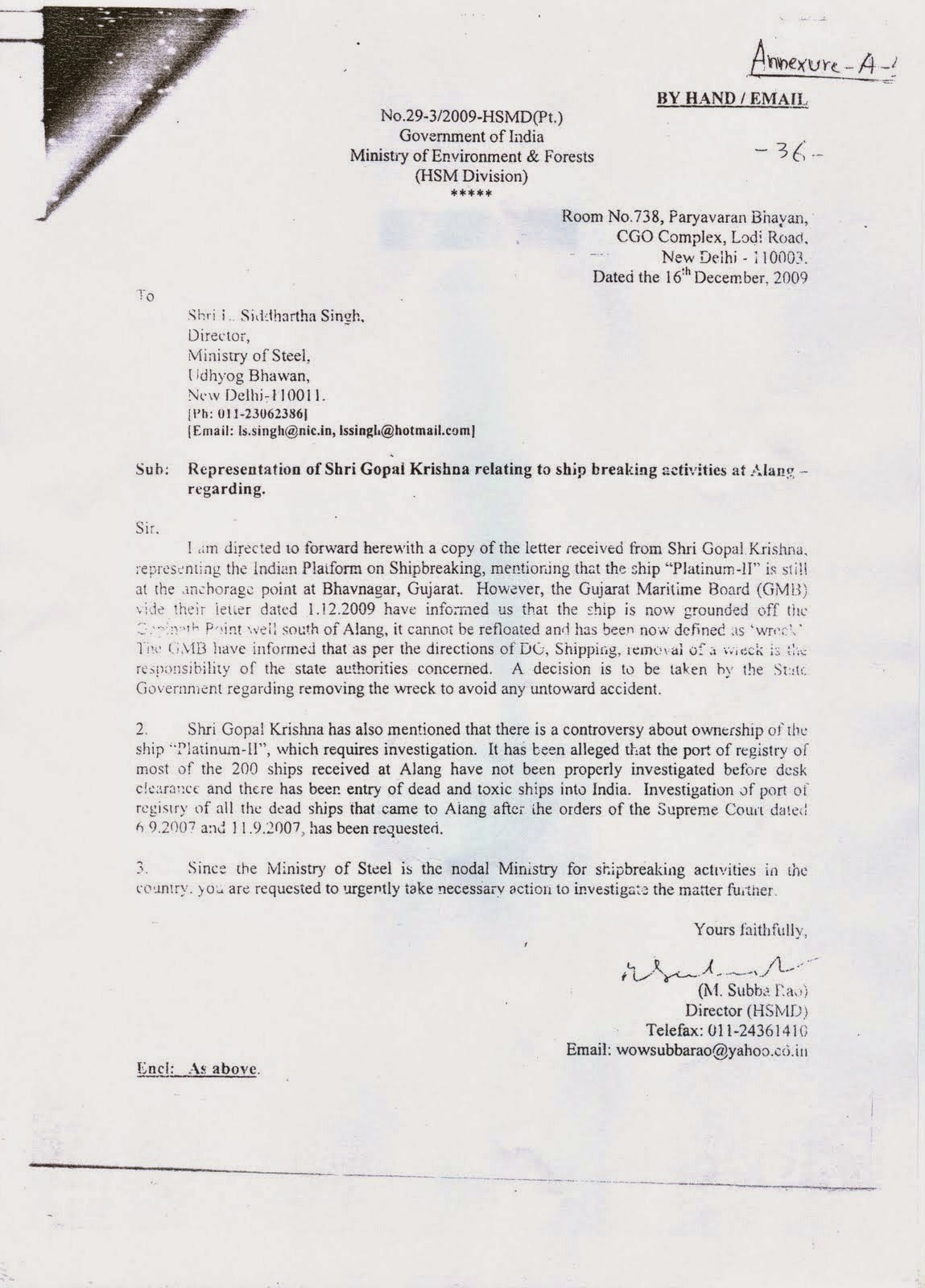 3.         Such ships or ship-breaking yards must carry out risk assessment prior to allowing entry of such ships to its water.
4.         In the event of high risk cases, such ports or ship-breaking yards may approach the Port State Control (PSC) Cell of the D G Shipping or the local Principal Officer of Mercantile Marine Department (MMD) for their inputs and advice including the conduct of Port State Control/Flag State implementation (FSI) inspection if necessary.

I submit that in the case of another end-of-life toxic ship Platinum II formerly known as the SS Oceanic (and originally, the SS Independence) that arrived in Indian waters for scrapping on 8 October 2009 with papers saying its flag was that of the Republic of Kiribati and that it was owned by Platinum Investment Services of Monrovia, Liberia. I had received official confirmation from the Operations Manager at Kiribati Ship Registry, Liau Siew Leng, that the registration was a forgery. The Kiribati Ministry of Communications, Transport & Tourism Development Office further confirmed the falsified documents. The communication was officially communicated by Kiribati Ministry of Communications, Transport & Tourism Development Office to the concerned Indian ministries including ministry of environment & forests.

I wish to reiterate that the permission for beaching if it is granted would be in violation of Hon’ble Supreme Court’s order, Shipbreaking Code 2013 and Basel Convention. The real owner of this dead and obsolete ship is Shri Christian Stadil, a noted Danish businessman who preaches a good deal about ethics in business but is apparently involved in unethical act of increasing the toxic burden on Alang’s ecosystem, migrant workers of the Gujarat’s shipbreaking industry and adjoining village communities.

I submit that in violation of the judgment of the Hon’ble court dated October 14, 2003 (reiterated in 2007 and 2012) which calls for prior decontamination of the ship in the country of export, the movement of this Danish ship fails to ensure the fundamental principle of “Prior Informed Consent”. The “reporting” is taking place only after the hazardous waste ship arrives in the importing country’s territory that a competent authority has the right to object and the objection allowed is not to the importation but to the ship recycling plan or ship recycling facility permit.  Thus, India is forced to receive hazardous waste in the form of ships.  The movement of such harmful toxic ships ignores Polluter Pays/Producer Responsibility Principle, Environmental Justice Principle, Waste Prevention/Substitution Principles and Principle of National Self Sufficiency in Waste Management.

I submit that if concerned government authorities in India allow entry to this Danish ship it will tantamount to grant of legal recognition to externalization of the real costs and liabilities of ships at end-of-life by the shipping companies of Europe and other developed countries.
We submit that the transfer of the Danish ship fails to reflect compliance with Basel Convention’s core obligation - minimisation of transboundary movements of hazardous waste, and as such will not prevent hazardous wastes such as asbestos, PCBs, old fuels, and heavy metals from being exported to the poorest communities and most desperate workers in developing countries. It fails to end the fatally flawed method of dismantling ships known as “beaching” where ships are cut open on tidal flats. This is required because on a beach it is impossible to contain oils and toxic contaminants from entering the marine environment; safely use cranes alongside ships to lift heavy cut pieces or to rescue workers; bring emergency equipment to the workers or the ships and protect the fragile coastal environmental zone from the hazardous wastes on ships. It allows hazardous substances from end-of-life ships to enter India outwitting the motive of the Basel Convention and leaving a toxic legacy for generations to come.

I submit that the movement of this ship under the flag of Bahamas is in violation of UN’s Basel Convention on Transboundary Movement of Hazardous Wastes and Their Disposal to which India is a party. It is also in violation of relevant European law by which it is governed. The letter dated 15 April, 2005 authored by Ms Connie Hedegaard, the then Denmark's environment minister to her Indian counterpart Shri A Raja about the illegal movement of a 51 year-old asbestos laden ship, Kong Fredrick IX underlines it.

I submit that the Danish ship Concord (IMO No. 9232319) offers an opportunity to set matters right and undo the damage done by Shri A Raja’s tenure.

I submit that the ship breaking activities are linked to issues of maritime and national security as has been recorded repeatedly in the minutes of the Inter-Ministerial Committee (IMC) on Ship breaking.

ToxicsWatch Alliance (TWA) has been working on the issue of hazardous wastes and ship breaking for over decade. It is an applicant before the National Human Rights Commission (NHRC), Parliamentary Standing Committee on Science, Technology, Environment & Forests, Parliamentary Petitions Committee, Parliamentary Standing Committee on Labour and relevant UN agencies besides Inter-Ministerial Committee on Ship breaking. It was the applicant before the Hon’ble Supreme Court wherein the order for creation of the Shipbreaking Code was passed. It had appeared before the Supreme Court’s Monitoring Committee on Hazardous Wastes, Court’s Technical Experts Committee on Hazardous Wastes related to Ship breaking and pursued cases involving famous ships like RIKY (Kong Frederik IX), Le Clemenceau, SS Blue Lady, Platinum II and Exxon Valdez and others.
In view of the above, we request you to ensure that the Danish ship in question is not given beaching permission and send it back from the Indian waters and in order to ensure that entry of end-of-life ships are compliant with obligations under Basel Convention, Hon'ble Court's order and the Code.

I will be happy to share more details in this regard.
Thanking You
Yours faithfully
Gopal Krishna
ToxicsWatch Alliance (TWA)
Mb: 08227816731, 9818089660
E-mail:gopalkrishna1715@gmail.com
Web: http://www.toxicswatch.com

Don't forget ones level classes a long time if you were required to determine the term and utilize it in the time period? We can do the identical for your term "underwriting, inch an insurance policy period.Truckers Insurance