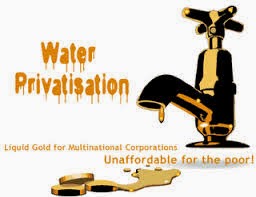 Note: Narendra Modi's government's myopic and environmentally disastrous plan to divert 39 major rivers to interlink them is aimed at privatisation of water. The way the government tried to cite Supreme Court's order to pursue the project is deeply problematic because the Court's order records that 7-8 states are opposed to such project. At the Jal Manthan organised by Union Ministry of Water Resources and Ganga Rejuvenation, states like Punjab and Telangana expressed their opposition to such project besides the environmental groups and followers of Sant Seechewal underlined that transportation of water is against our culture.
Gopal Krishna
ToxicsWatch Alliance (TWA)

Stop water privatisation and strengthen public water supply
A new report by Corporate Accountability International uncovers how the World Bank uses ponzi-style marketing tactics to sell privatization projects around the globe that it is also positioned to profit from. "Water privatization has been a disaster,” said Dr Sandeep Pandey, Magsaysay Awardee and national vice president of Socialist Party (India). "We must prevent the World Bank and corporations like Veolia from expanding their reach and block any potential project."
In response to industry reports of an undisclosed contract between the World Bank and the city of Lagos to design and implement a plan to privatize water in Lagos, Corporate Accountability International (CAI) and Environmental Rights Action of Nigeria (ERA) launched a campaign calling on the World Bank to publically disclose the advisory contract with its private sector arm, the International Finance Corporation (IFC). After weeks of pressure from civil society, the World Bank announced the cancellation of the proposed advisory contract. Leading trade publication Global Water Intelligence also published a retraction of its earlier claim that the IFC’s contract with Lagos Water Corporation was in effect.
Central to the groups’ concerns and the focus of the report is the misleading PR the World Bank uses to market water privatization projects to governments around the world. As part owner of several water corporations including Veolia and Manila Water Company, the World Bank is positioned to directly profit from this marketing, and the resulting projects. Two of the Bank’s most often relied upon “success” stories are in Manila, Philippines and Nagpur, India—both cases that are considered deeply troubled by water privatization experts.
“This week of action and report release mark the beginning of the end to the World Bank’s deceptive marketing and harmful water privatization projects,” said the report’s author, Shayda Naficy, an international water privatization expert, “Officials considering such projects deserve to know the truth—the World Bank isn’t an impartial advisor; it has a vested financial interest in these deals going through. And, second, they’re locking their people into contracts that entail , regardless of the rate hikes, service cutoffs, labor abuses and other human consequences and don’t solve the central obstacle to expanded access: infrastructure investment that often result.”
As the report details, in 1997, the IFC, the private sector arm of the World Bank, advised the Philippines government to contract with two private corporations—Maynilad and Manila Water Company—to manage the city’s water system, and took an equity stake in Manila Water Company. The results have been devastating. Rates have increased over 500%, the workforce has been cut, poor quality has led to disease outbreaks, and broken infrastructure promises have resulted in unreliable or nonexistent access in some communities. And, the corporations have now taken the government to arbitration to force through new rate hikes.
And, in Nagpur, India, a water project – involving a Veolia subsidiary in which the IFC holds a 13.9 percent stake -- has been marked by failure at every turn. The project has been mired by the failure to deliver the infrastructure improvements promised, project delays, inequitable water distribution, service shutdowns, and allegations of corruption and illegal activity that have resulted in ongoing protests, official investigations and legal action. Despite these problems, the bank has declared the project a success and promotes both cities as models to be emulated elsewhere.
The week of action is part of a growing global movement to reclaim privatized water systems and prevent new deals from going through. In the U.S., seen as an expansion market for the private water industry, people in Baltimore, Maryland and Detroit, Michigan are organizing to oppose potential privatization contracts with Veolia, alongside partners from across the globe.

Nice blog! Thanks for sharing with us. labour supply contract