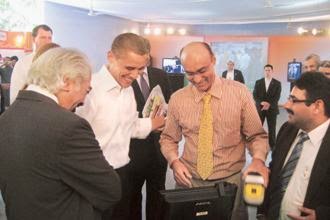 Bio-Metric Aadhaar Attendance: An attempt to enslave the workers and Indian political system


In order to appease US President Barack Obama who is the chief guest on the republic day, the republic is being under put under surveillance the universal Aadhaar coverage, aadhaar enrolment camp for MPs is underway in Parliament from November 11, 2014. Obama's interest in aadhaar is quite known. Wikileaks had revealed that US agencies are closely monitoring the implementation of the project. Not surprisingly, President Obama visited Aadhaar enrolment station during his last visit to India. His delegation included the CEO of L1 Identities Solution, then a US MNC (now a subsidiary of French company).
The URL on Planning Commission’s Unique Identification Authority of India (UDAI)’s website that provided this news at the relevant URL- 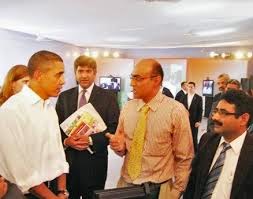 uidai.gov.in/images/FrontPageUpdates/obama_uid/barak_obama.html has been disabled for some reason.

The full content of UIDAI’s contracts with two foreign companies L1 and Accenture has not been fully disclosed under the RTI as yet. Notably, L1 was a Delaware, US-based Corporation when the contract was signed. L-1 has since been bought over by French corporate conglomerate, Safran Group after the Committee on Foreign Investment in the United States (CFIUS) was convinced that there are no unresolved national security concerns with respect to the transaction. L-1 Identity Solutions announced agreement to be acquired by Safran on 20 September 2010.   Sagem Morpho, a unit of Safran already had a contract with UIDAI. As to Accenture Services Pvt Ltd, it is a "Biometric Solution Provider", a subsidiary of Dublin, Ireland based Accenture plc, a US company. Till 1 January 2001 it was known as Andersen Consulting. Both the contract agreements have been signed in the name of the President of India. While L1 was a US corporation, its Indian subsidiary had a registered office at 2, Frontline Grandeur, 14, Walton Road, Bangalore. Now that it has become a French company, it is not clear whether its Bangalore address is intact or not.

Protest against the implementation of an anti-worker biometric attendance system i.e. an attendance system by way of biometric scanning by the workers and unions is underway in the Jhanjhra Area Management. Jharjhra is a fully mechanised mine of Eastern Coalfileds Limited, situated in Raniganj, district Burdhwan in West Bengal. A widespread discontent is discernable among the workers. The Khan Mazdoor Karmachari Union (IFTU-Sarwahara) [Mine Workers Employee Union (IFTU-Sarwahara)], has not accepted this system, being installed by the management and has decided to struggle against the installation.

It further states: Let’s see why it is necessary for the workers to oppose the biometric attendance and CCTV installation.
First, via this system of attendance, the bio-metric machine will scan our faces and eyes and keep them online on computer/internet. This fact in itself is illegal, dangerous and worth pondering. Why? Firstly, because the scanned photograph can be, intentionally or unintentionally, misused by any agency (the one that will be privy or have access to the data.). For instance, if any terrorist organization gains access to this data, then it can be used with catastrophic repercussion. We would like to raise the question: in such an eventuality, who will be responsible? The situation accentuates in case of female workers and employees. It will cast severe question mark on their integrity and respect. Keeping these things in mind only, in a similar instance i.e. Adhaar Card (Unique Identification System) the Supreme Court gave a verdict, in which, it categorically said that forcibly implementing the biometric identification infringes on the fundamental right of privacy. It is a well established covenant world over that without permission no one, not even the Government, can keep physical identification of a person. The constitution of India, as is well known, prohibits any agency/management/institution, what so ever it may be, from keeping such data as physical identification of a person under its control and access without one’s due permission
Second Fact, we do not know, nor the Management has informed us on the radiations emitted by the scanning machine, but, on the other hand, the workers will have to undergo scanning of their faces and eyes twice a day. Very Strange! Who knows what will be the impact of it on our eyes and faces!! Whether management has undertaken concrete scientific investigation about it, we do not know this, too. We demand to know who will be responsible for the possible long term deadly after-effects of the Scanning Machine’s radiation.
Third Fact Apart from the above, let’s see how it will have impact on the extra time involved for the attendance of the worker. Let’s assume that there are 100 workers standing in front of the machine to punch-in their attendance, if one worker takes minimum of 30 seconds (though in reality it may take much more), then for the last worker it will take extra 50 minutes to punch-in his/her attendance. That means he/she will have to leave for the work 50 minutes before the schedule. Same will be the case for punch-out. Who will be responsible for this wastage of time and who will compensate for this loss?
Fourth Fact the confidence of workers is vital. In case of the machine malfunctioning or it being out of order, or if it fails to record attendance even after saying “thank you” i.e. in case of false recording of attendance, and hence in case of attendance dispute arising there from, what proof will the worker have in his possession to claim that he was present?
Fifth Fact similarly what will happen for driller, dresser, explosive carrier and short firer? As is evident from the design of things appearing through biometric, pressure on them to enhance workload is bound to increase.
Sixth As is becoming as clear as day light from the above facts, it is ludicrous as to why the management is wasting at all a fortune as big as thousands of lakhs or crores of rupees on installing the biometric system. It has been clarified above that there is no worth, as is being claimed over board by the management, in installing this machine; on the contrary, it is anti-workers, dangerous and one that will fuel unnecessary debate and unrest. Actually the main behind the curtain intention of the ECL managements is to have total control over the life of workers that is simply excessive and unnecessary. The way Jhanjhra management is after this lays weight to suspicion.
Seventh One of the arguments given by management is that it will increase production. The motive of installing CCTV inside the mines and offices, too, has to be seen in this light. In reality, the intention of the management is to increase the production by way of excessively pressurising the workers. The truth, however, is that precondition of increasing production is that workers must have a joyful family life. It is vital that the worker gets the necessary 8 hours of leisure, their homes are clean and healthy, they get proper transport and there are such safety measures as are necessary to make the mines safe for the workers so that they work without safety related strains in their mind, and as a result, they are able to work without any pressure or duress. But the management seldom thinks of bringing these qualitative changes in their lives. On the contrary, the management by all means tries to deprive the workers the fruits of gigantic leap hitherto taken in the field of labour-productivity and always does whatever it can to to convert the workers into an appendage of machine i.e. aims at turning the human worker just into an animal. Moreover, they want to control every breath of workers to increase the production. This anti-worker stance of management is evident everywhere. The management hitherto has not been able to even provide clean drinking water to the homes of the workers. Electricity supply is simply pathetic and the workers quarters are such that one cannot even use gas cylinder. The state of cleanliness of their colonies is an open secret. Under such inhuman conditions, how can workers increase production?

It concludes: The experience of the movement against biometric in Jhanjhra explains that ECL management is not ready to listen to the workers, to say the least. Perhaps they think, however they behave and whatever they order, the workers will follow their diktat. The management needs to be told that they should not live in this delusion. The history of working class is witness to this fact that the workers have always resisted the dictatorial attitude of the owners and managers of capital. Today the workers of entire coal belt and particularly that of Jhanjhra will have to unite against this dictatorial attitude of the management. The most militant union of the coal belt – Khan Mazdoor Karmachari Union (IFTU-Sarwahara) [Mine Workers Employee Union (IFTU-Sarwahara)] appeals to all of you that if we do not agree to our being treated as and turned into animals, then the only path left for us is that of struggle. Comrade workers! Come and unite under one flag and commence a new struggle. We are convinced that if all the workers of ECL unite into one entity, then we are more than capable to forcibly bring this anti-worker obstinate, intransigent and stubborn management to negotiation table and force it to accept a roll back of these measures as well as all other such anti-workers measures, policies and diktats hitherto taken.

By Circular No. Pers-CF/BARS/2014/508 dated 11th November, 2014 G Sujatha, AGM (Pers-CS), Durgapur Steel Plant, Steel Authority of India Limited, have made procedure of Biometric Attendance Recording System mandatory with insuring disciplinary actions. Hindustan Steel Workers Union, Durgapur Steel Plant are protesting against “illegal and illegitimate capturing of fingerprints  of employees and implementation of “Biometric Attendance Recording System” without any lawful authority and in violation of Article-21 of the Constitution of India and other related statutes.”

Notably, Delhi University Teachers’ Association (DUTA) and Delhi University College Karamchari Union (DUCKU) is protesting against the installation and implementation of Bio Metric Attendance system as well.
By Circular No. F.1(92)RB/Div Com/HQ/2012/311-320 dated 12th November, 2014 vide Para 3 Inspector General of Registration, Department of Revenue, Government of NCT of Delhi has made Aadhaar No. / Enrolment Slip as necessary for registration of a document under Section 69 of Indian Registration Act. The said circular has been issued to All Sub-Registrar Offices Guidelines No. 3 reads as follows:

“3)       MODE OF IDENTIFICATION OF PARTIES THROUGH AADHAR NUMBER:
Aadhaar Number/Enrolment Slip may be demanded to ensure identification of the parties. In case a person has no AADHAR Card but he is having enrolment slip, he should be permitted to avail the services, In case a person does not possess either enrolment slip or a Aadhaar Card/Number, he should be asked to apply for the enrolment of Aadhaar card immediately at the Centre and be provided enrolment slip and after that he can avail the services.”

“Issue Notice.
In addition to normal mode of service, dasti service, is    permitted.
Operation of the impugned order shall remain stayed.

In the meanwhile the present petitioner is restrained from transferring any biometric information of any person who has been allotted the Adhaar number to any other agency without his consent in writing.
More so, no person shall be deprived of any service for want of Aadhaar number in case he/she is otherwise eligible/entitled. All the authorities are directed to modify their forms/circulars/likes so as to not compulsorily require the Aadhaar number in order to meet the requirement of the interim order passed by this Court forthwith.

The apex Court’s order has made it clear that no person shall be deprived of any service for want of Aadhaar number in case he/she is otherwise eligible/entitled. It is abundantly clear that the biometric aadhaar number case has become the litmus test to demonstrate whether rule of law still exists in India or biometric surveillance companies have subverted Indian legal and political system for good.

Hi, i am Pranali Sharma can anyone suggest me how to apply for aadhar card online.