Double standards adopted by State Pollution Control Board for Bhojpur asbestos factories, notes Patna High Court
February 1, 2014: In a significant development, 15 year old Rekha Kumari, daughter of 37 year old Virendra Kumar Singh alias Barak Yadav, the dead Ramco’s asbestos factory worker has filed a complaint in the National Human Rights Commission (NHRC), New Delhi accusing Ramco Industries of having caused his father’s death. The complaint was received by NHRC on January 28, 2014.
Late Virendra Kumar Singh a resident of Mishraulia, Shahpur, Bhojpur worked in the factory of Tamil Nadu based Ramco Industries in Bhojpur, Bihar.  He survived by his 80 years old father Rasbihari Yadav, his 34 year old wife Sunita, his two daughters-aged 15 and 8 and two sons-aged 12 and 6.
In her complaint, deceased asbestos worker’s daughter has informed NHRC that his father died of chest related diseases on November 2, 2013. She has complained that the company did not provide any medical treatment to his father when his father suffered from chronic pain in chest from September 2013 onwards. In her complaint she states that “she believes that his father died due to the disease caused while he was working at Ramco’s factory.” Seeking justice, she has demanded adequate compensation and sought fixing of accountability of the company.

Her complaint has been submitted as part of on an ongoing case (Case No.2951/30/0/2011) in NHRC as well. In this case Bihar Governments has filed its submission referring to the operations of asbestos factory in Bihiya, Bhojpur, Bihar. The submission of the government is evasive and incomplete is revealed by letter from the daughter of the asbestos worker.
The painful death of Shri Virendra Kumar Singh alias Barak Yadav, the asbestos worker who worked in the factory of Ramco Industries in Bhojpur, Bihar merits urgent attention. The State Government may be asked to submit the health records of all the workers who are working in this factory including that of Shri Virendra Kumar Singh alias Barak Yadav.

Meanwhile, a team of Raju Ranjan, Jan Sankriti Manch, Ara, Bhojpur and a representative of
ToxicsWatch Alliance (TWA) recently visited the family of the victim of the asbestos related disease and inquired about the circumstances of his death. The team will submit a fact finding report to the Bihar State Human Rights Commission and other concerned authorities.

As per Hon’ble Supreme Court’s judgement of January 27, 1995 in Writ Petition (Civil) No. 206 of 1986 which was reiterated on January 21, 2011, the health records of workers have to be maintained for 40 years and for 15 years after the retirement. The judgment also stipulates compensation for such workers who suffer from asbestos related diseases.

Notably, Hon’ble Patna High Court has rightly observed in its August 19, 2013 order that “…In the circumstances, this Court is really surprised with the stand of the State Board that the norms have been relaxed for the two other asbestos manufacturing units in operation from before, only on the ground that they are running in the respective industrial areas.”

In the light of this observation it is abundantly that Bihar State Pollution Control Board (BSPCB) is adopting double standards in the matter of cancellation of Consent to Establish-cum- No Objection Certificate (NOC) given to asbestos companies in Bhojpur and Vaishali. The two companies –namely, Tamil Nadu based Ramco Industries and Nibhi Industries -mentioned by the Court are located in Bihiya and Giddha, Koilwar of Bhojpur district. BSPCB has cancelled the NOC of West Bengal based Utkal Asbestos Limited (UAL)’s proposed asbestos based plant in Vaishali for violating environmental and industrial siting guidelines of BSPCB.

The plant got environmental clearance for the first unit. Even this clearance and the NOC was/is based on a fake public hearing with the help of local muscle man. There are complaints pending with the District Administration against the plant. It violates the environmental and industrial siting guidelines of BSPCB. The total project area is 20 acres and land is allotted by the state government on lease for 90 years. On 10th May, 2010, the project was discussed by the Experts Appraisal Committee (EAC), Industry, Union Ministry of Environment & Forests. In the minutes of the EAC, there explicit reference to “Health Management Plan for Mesothalimoa, Lung cancer and Asbestosis related problems in asbestos industries”. The plant being established by Tamil Nadu based Ramco Industries Ltd. Bihar’s State Investment Promotion Board (SIPB) had cleared its establishment on 23rd November, 2009 with a total investment of Rs 60.20 crore. The second unit of the Ramco company is running without environmental clearance and NOC.

In contempt of Supreme Court’s order dated January 27, 1995, the Ramco is not maintaining and maintaining the health record of every worker, not conducting Membrane Filter test to detect asbestos fibre and not insuring health coverage to every worker. It is reliably learnt that the company does not have qualified occupational health doctors to undertake these tasks. The company should be asked for a list of workers employed in the factory, their health records and the qualification of the doctor assigned to undertake their health checkup. 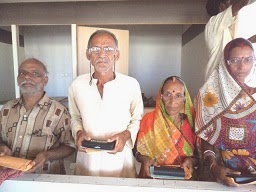 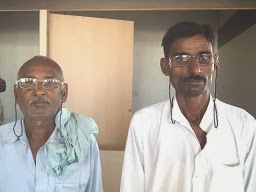 (Photo: http://www.ramcoindltd.com/csr.asp)
While BSPCB has done the right thing by citing its battery limit of “a distance of minimum 500 meters from the National/State Highway, Railway line, river and human habitation” to outlaw the proposal of a asbestos company, the same should be applied to asbestos based toxic factories in Bhojpur. No amount of sophistry by the companies operating in Bhojpur and some officials in BSPCB can undermine the gnawing anxiety about risk and hazardous consequences underlined by WHO and ILO which has sought elimination of manufacturing and use of asbestos based products. The BSPCB should take recourse to pre-existing orders of the Supreme Court and its legal imagination to outlaw industrial and environmental risks from these hazardous factories and save public health. 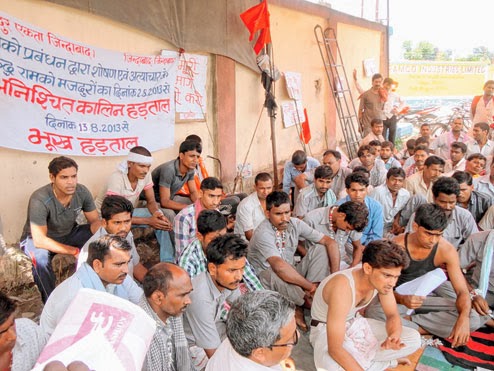 Photo: Smita Kumar, The Telegraph
In a related development, two teams of TV journalists from US and Delhi visited and recorded the indiscriminate dumping of asbestos waste in the agricultural fields and in the backyard and front yard of village households by Ramco Industries. The company has created a dumpsite of its asbestos waste adjacent to human habitation with impunity. Its factory is situated amidst villages and temples that exposes the villagers to the hazardous fibrers. The villagers revealed that the factory releases huge amounts of dust and smoke at night that creates a cloud above their houses causing visibility problem.

The other factory is of Chennai based Nibhi Industries Pvt. Ltd for One Lakh MT Capacity Asbestos Fiber Cement Corrugated Sheet, Flat Sheet and Accessories and Light Weight Fly Ash Block Plant at Giddha, Koilwar, Bhojpur. There are complaints pending with the District Administration against the plant. The asbestos based factory at Giddha, Koilwar is also in proximity of human habitation is exactly in front of Trident BEd College. One worker was crushed to death in this factory in June 2013. It also violates the environmental and industrial siting guidelines of BSPCB. A reply dated August 13, 2012 was sent to the Secretary, Environment & Forests Department, Government of Bihar by BSPCB which was shared with the NHRC. It revealed to NHRC that the Giddha based factory was not working. Its clearances have expired and a show cause notice was issued to the plant. Paryavaran Swasthya Surkasha Samiti has been seeking removal of the plant, decontamination of the site and compensation for exposing the villagers of Giddha to asbestos fibers.

Both central and state government expect communities in villages around the hazardous industrial units of Ramco Industries in Bihiya and Giddha to become superior risk bearers unlike villagers of Muzaffarpur and Vaishali where similar plants have been stopped. Unmindful of the death toll, clearances have accorded to yet another asbestos based plant in Madhubani amidst all round opposition. When defending the indefensible asbestos factories becomes a compulsion of officialdom, disasters like the one witnessed in the factory of Union Carbide Corporation (UCC)’s hazardous pesticide plant become the order of the day.

We offer fresh cut bank instrument for lease/sale, such as BG, SBLC, MTN, Bank Bonds, Bank Draft, T strips and others. Leased Instruments can be obtained at minimal

expense to the borrower compared to other banking options. This offer is opened to both individuals and corporate bodies.