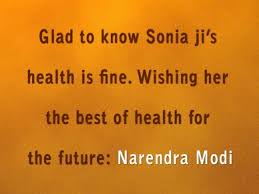 2014 General Election of India will decide who will be the Prime Minister (PM) of India. Indian people will do Post-Mortem (PM) of leaders and parties during the election campaign of 2014. Let us not debate in way where BJP wants to claims that C = P and that is why CM = PM.

Today’s announcement of BJP got MODIfied which was visible from the easily ‘understandable’ statements of various dissents voices among the BJP. I strongly believe that some of the BJP’s leaders might have problem with Mr. Narendra Modi not because of his hard hindutva politics but they might be fearing a personality cult that subsumes party structure whose cult will ultimately be responsible for the speedy death of that organisation.

Now BJP has converted itself into the BJP (Modi), with the slogan “BJP is Modi and Modi is BJP”, something eerily echoes Congress party's slogan years ago, that BJP opposes tooth and nail.

It is now an open secret that Mr. Narendra Damodardas Modi is able to establish 'Modicracy' in BJP at least at this point of time. If I am not wrong even those who are supporters and admirers of Mr. Modi in BJP might be upset and frightened with the success of 'Modicracy' in BJP. In the past, the leaders of the BJP used to begin or end speeches with ‘Bharat Mata Ki Jai' or 'Vande Mataram' as their main slogans. But now their day cannot begin or end without praising Mr. Modi.

Mr. Manmohan Singh of Congress may have problem with 'Modicracy' but not with the capitalist development model of Mr. Modi.

We the people have witnessed the Emergency of Ms. Indira Gandhi and that is why the people of India and Gujarat should not ignore the issue of 'Modicracy' by saying that it is the internal matter of BJP but people should discuss the impact of 'Modicracy' even on the bourgeois democracy. That is why we as people should not only discuss and fight back the 'Modicracy' but also discuss and fight back the 'Capitalist Development Model’ of Mr. Modi and Mr. Manmohan Singh.