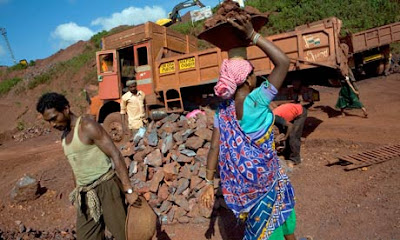 The report: Out of control – mining, regulatory failure and human
rights in India focuses on iron mining in Goa and Karnataka to
illustrate a broader pattern of failed regulation, alleged corruption
and harm to local communities.

In Karnataka, BS Yeddyurappa resigned as chief minister last year
after being indicted by an anti-corruption panel in an illegal mining
scandal that allegedly cost the exchequer more than £1.8bn between
2006 and 2010. The southern Indian state, where illegal mining is
rife, produces about 45m tonnes of iron ore a year and exports more
than half of it to China.

India's mining sector has experienced a boom driven by strong
international demand. The country produced around $44bn worth of
minerals during 2010-11, with the total more than doubling between
1993 and 2011. India's mines also directly employ several hundred
thousand people and indirectly help sustain the livelihoods of many
thousands more.

However, the sector is rife with illegality. The most brazen
criminality involves the extraction of minerals from land that a mine
operator has no legal right to work on. In some cases, this occurs
deep in isolated forests or in the form of fly-by-night operations
with only a few machines and labourers working in a very small area.

As lurid as some of India's mining-related corruption scandals have
been, the more widespread problem is government indifference,
according to HRW.

"Even in Karnataka, ineffectual regulation played a key role in
allowing criminality to pervade the state's mining sector," says the
report. "And many of the alleged human rights abuses result not from
patterns of corruption or criminality but from the government's more
mundane failure to effectively monitor, let alone police, the human
rights impacts of mining operations."

The report says the government often leaves companies to regulate
themselves, which has proven disastrous in India and around the world.
The government, for example, relies on mining companies to commission
and produce the "independent" environmental impact assessments (EIA)
that are used to gauge a proposed mining project's likely
environmental, social and human rights impacts.

This, says HRW, creates an unnecessary conflict of interest that could
be solved by giving regulators a central role in commissioning the
studies. The assessments also tend to give short shrift to human
rights issues, focusing overwhelmingly on purely environmental
concerns.

Worse still, HRW says there is considerable evidence that these EIA
reports are often inaccurate or deliberately falsified. In some cases,
issues of potential concern – the presence of rivers or springs, for
example – are omitted. In one notorious example, a mine in Maharashtra
received clearance to proceed even though its EIA report contained
language taken verbatim from a similar report prepared for a bauxite
mine in Russia.

Enforcement is an even bigger problem, says HRW, which found
regulatory institutions hopelessly overstretched. A few dozen central
government officials are responsible for overseeing the environmental
and human rights impacts of every mine in India – and many other
industries as well.

"This makes in-field monitoring a practical impossibility, forcing the
government to rely almost exclusively on information provided by mine
operators themselves," says the report. "Many state government
oversight bodies have even less capacity to implement their
challenging mandates. As a result, government regulators have no idea
how many mining firms are complying with the law or how many
communities have been harmed by illegal practices."

HRW acknowledges that the central government has taken some tentative
steps toward improving oversight – such as requiring companies to
choose from a list of accredited firms to carry out EIAs. But the
reforms have not gone nearly far enough, says the group, which urges
the government to adopt recommendations to narrow some of the most
important regulatory gaps.

"Mining is an important part of India's economy, but that does not
mean the industry should be allowed to write its own rules," said
Meenakshi Ganguly, south Asia director at Human Rights Watch. "The
government can and should empower regulators to do their jobs more
effectively than they can today."
javascript:void(0)