NEW DELHI, Dec 14, 2010 (IPS) - A plan to establish waste-to-energy plants in New Delhi as part of a carbon- trading programme has run into fierce opposition over hazards posed by toxic chemical byproducts.

"The government is mistaken if it believes that the citizens of Delhi are unaware of environmental issues," Gopal Krishna, convenor of the Toxics Alliance Watch tells IPS. "These are not illiterate villagers in some distant district and they worry about being directly affected by three pilot waste-to- energy plants fast coming up in their city." 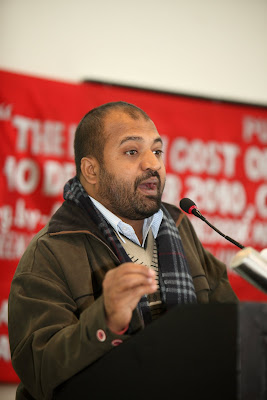 Krishna told IPS that he is encouraged by the stiff resistance from the affluent south Delhi locality of Sukhdev Vihar. The area is populated by doctors, engineers, writers, and artists. They have already fought off a biomedical waste incinerator that spewed plumes of toxic smoke over a boundary wall.

"We will certainly oppose this new waste-to-energy plant, as it poses an even greater threat to health than the biomedical incinerator," Vanya Joshi, a Sukhdev Vihar resident who makes films on environmental issues told IPS.

"How can they ask us to put up with this so-called waste-to-energy project?" says Siddharth, one of India’s most respected painters, who lives and works out of Sukhdev Vihar.

In addition to the Delhi plant, two other plants are being built at Timarpur and Ghazipur, on the northern and eastern outskirts of the city. Together, the three plants will process 3,200 tonnes of solid municipal waste to produce 26 megawatts of electricity, beginning 2011.

The Delhi state government includes waste-to-energy plants in its climate change initiatives for the 2009-2012 period, claiming that its agenda is in line with the Prime Minister’s National Action Plan on Climate Change (NAPCC) launched in June 2008.

"This is a false claim," Krishna told IPS. "The NAPCC document categorically refers to bio-methanation, a biological treatment method rather than technology to produce refuse-derived fuel (RDF) which relies on incineration."

Of these persistent organic pollutants (POPs), dioxins and mercury are considered particularly harmful because they remain in the environment and in animals.

On Jun. 27, the residents of Sukhdev Vihar formally petitioned Delhi’s chief minister, Sheila Dikshit, demanding to know how "the government can allow such a hazardous project to come up amidst residential colonies." The residents also petitioned the Delhi High Court for relief.

Within a radius of two kilometres from the existing and upcoming incinerators are three major hospitals: Holy Family Hospital, Fortis-Escorts Heart Institute, and Indraprastha Apollo hospital. Also in close proximity is the Jamia Millia Islamia University.

Krishna finds it galling that the waste-to-energy plants are registered as part of a carbon credit programme and claim to be Clean Development Mechanisms (CDMs) by generating electricity using a non-conventional energy source.

CDMs are arrangements under the Kyoto Protocol that allow industrialised countries with a greenhouse gas (GhG) reduction commitment to invest in projects that reduce emissions in developing countries.
"This is preposterous," he said. "Waste incineration generates greenhouse gases and clearly cannot qualify as a CDM."

Krishna says that while communities living in the vicinity of incinerators are most at risk, contamination can reach areas as far away as 1,000 miles (1,600 km).

POPs are known to have long-term toxic effects that can be passed from one generation to the next through mother’s milk. POPs threaten the health of unborn children because they can pass through the placental wall and interfere with foetal development.

"Every one of Delhi’s 12 million residents will be exposed to the toxins via the food chain," said Krishna. (END)