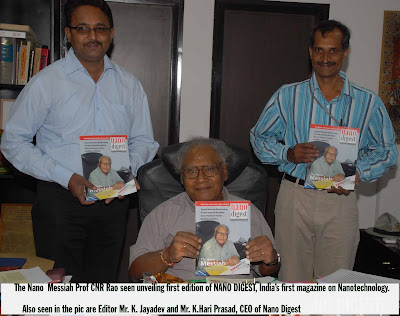 India's Nano Messiah Prof. CNR Rao launches first issue of Nano Digest Government agreed to give Rs 1000 crore for the Nano Mission to implement the various projects. Mission to set up two institutes of Nano-science and Technology, one in Bangalore and other in Chandigarh: Nano Mission Chairman

The Government of India started the National Nano Mission just about a year and half ago. We have been asking the Government of India to invest a substantial amount of money for research and development in Nanoscience and technology for sometime. The government agreed to give Rs.1000 crore for the Nano Mission to implement the various projects, informed Prof. CNR Rao, Chairman of Nano Mission in India in a cover story published in first issue of Nano Digest. Speaking about plans of Nano Mission in India, Rao said in the interview that the Nano Mission will be setting up two institutes of Nanoscience and Technology at Bangalore and Chandigarh.

The cover story features Prof. CNR Rao, FRS who is Chair of the Scientific Advisory Council to India’s Prime Minister and National Research Professor, Linus Pauling Research Professor and Jawaharalal Nehru Centre for Advanced Scientific Research (JNCASR). Who could be a better personality than Prof Rao to feature on the cover of our maiden issue said K. Jayadev, Editor of Nano Digest in his editorial. Prof Rao has received worldwide recognition for his contribution to solid state and materials Chemistry and is an author of over 1500 research papers and 41 books. He has received honorary doctorates from 46 Universities. He has been honored with several national and international scientific awards except the Nobel Prize mentions the cover story. In this cover story, Prof Rao speaks about the state of Nanotechnology in India, the directions it needs to take and also what it has got in store for every Indian.

The inaugural issue of the monthly magazine has 52 pages with a significant printrun. It is targeted at Nano Professionals and industry personnel and is priced at Rs.100/- only. The One-fourth dummy magazine printed on art paper covers among other things, events, news updates, a success story. There is a column on Nano Community, a special centre spread pull out on education and careers in Nano Technology, features on one hundred reasons to be a scientist, Molecular Manufacturing, Nano technology impact on Veterinary Applications, Nano trends, products and profiles, Industry watch and others.

The promotional issue brought prior to the launch of Nano Digest yielded a very good response from the industry, informed K. Hari Prasad, Chief Executive Officer.

Nano science and technology is the future of the world. Nanotechnology is the next industrial revolution, which will transform the world radically. Nanotechnology has the potential to create many new materials and devices with wide-ranging applications, such as in medicine, electronics, and energy production. Just like IT, Nanotech is expected to be embodied in many products in the coming times. It is spreading its wings to each and every field. ‘Nano Digest’ is devoted to bring research, development, technological advances, trends and business news for nanotechnology professionals and students alike, informed K. Jayadev, Editor - Nano Digest.