Ahead of the upcoming elections in three states, petition in the Supreme Court challenging Section 4 and 5 of Election Law (Amendment) Act and Union Government’s notification dated June 19, 2022  linking UID/Aadhaar Number with Voter ID Number seems to have reached a competent High Court. In line with Election Law (Amendment) Act 2021, Registration of Electors (Amendment) Rules, 2022 under Representation of People Act, 1950 comes into force from August 1,2022 as per notification dated June 19, 2022 to link UID/Aadhaar number with Voter ID number. 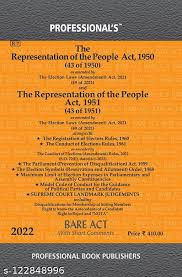 This law and the rules framed under it were challenged by Randeep Singh Surjewala, a leader of the Indian National Congress in the Supreme Court. The writ petition (civil) was filed on 8 April, 2022. It was registered on 2 May, 2022 and verified on 10 May, 2022. secretary, legislative department, ministry of law and election commission of india were made respondents. The office report noted that similarity found in the present case is based on Justice K.S.Puttaswamy (Retd) v. Union of India (2018). This petition was called on for hearing on 25 July, 2022 before the bench of Dr. Justice D.Y. Chandrachud and Justice A.S. Bopanna. The petitioner was represented by Abhishek Manu Singhvi. Upon hearing the counsel, the Court passed made the order. It reads: “The PIL-petitioner seeks to challenge the constitutional validity, inter alia, of Sections 4 and 5 of the Election Laws (Amendment) Act 2021. An efficacious and alternate remedy is available before the High Court in the exercise of its jurisdiction under Article 226 of the Constitution of India. In view of the remedy which is available in law, we grant the liberty to the petitioner to move a petition under Article 226 of the Constitution of India before the competent High Court.”

Unless a competent High Court declares Sections 4 and 5 of the Election Laws (Amendment) Act 2021 or the entire Act as unconstitutional, those citizens who are already in Voters List are at a liberty to intimate their UID/Aadhaar number "voluntarily" by April 1, 2023.