Third degree treatment of words, impregnating "and" with the meaning of "or" and vice versa

The word "and" has been tortured and it has been given third degree treatment. As a consequence, "and" has confessed to being "or" as well.  Till now one knew of tortures and third degree treatment being given by ill trained police officials who await police reforms. Now that national judicial data grid is converging judicial & police database, they are converging their approach with regard to torture of "words" 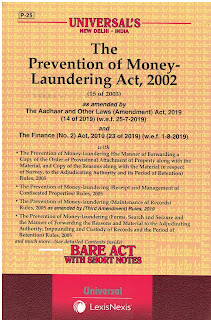 Supreme Court's order of 27 July, 2022 in Vijay Madanlal Choudhary v. union of India by Justice A M Khanwilkar Bench in PMLA case states the word “and” in Section 3 of Prevention of Money Laundering Act (PMLA) 2002 will not be fully in line with Vienna & Palermo Conventions, "the jurisprudence as evolved in India to interpret the word 'and' as 'or' in the context of the legislative intent— to reckon any (every) process or activity connected with the proceeds of crime constituting offence of money". (para 39)

Prior to the amendment in Section 3 of PMLA by Finance Act, 2019. The provision reads as follows:“Offence of money-laundering— Whosoever directly or indirectly attempts to indulge or knowingly assists or knowingly is a party or is actually involved in any process or activity connected proceeds of crime including its concealment, possession, acquisition or use and projecting or claiming it as untainted property shall be guilty of offence of money-laundering.” The definition of proceeds of crime is dealt under Section 2(u) of PMLA. It reads as follows:“proceeds of crime” means any property derived or obtained, directly or indirectly, by any person as a result of criminal activity relating to a scheduled offence or the value of any such property.”

The 27 July order reads:we have no hesitation in construing the expression “and” in Section 3 as “or”, to give full play to the said provision so as to include “every” process or activity indulged into by anyone, including projecting or claiming the property as untainted property to constitute an offence of money-laundering on its own.(para 41)

Such an interpretation of "and" as "or" subverts the legislative intent behind the PMLA which was enacted to prevent and punish specific set of offences—the conversion of proceeds of crimes into ‘untainted’ money. This interpretation extends the ambit of the law and brings offences unrelated to money laundering under its purview.

It may be recalled in a similar exercise of linguistic gymnastics Justice Khanwilkar (retiring on 29 July) had agreed with Justice (retd.) A K Sikri when he tortured the word "resident" in Aadhaar Act verdict and made it confess that it has two names, its other name is "citizen". If "resident" too can be tortured to confess that it means "citizen", then why should there be any surprise when "and" is tortured and made to confess that it also means "or". If u can torture any "word" long enough, it will confess to have any meaning you want it to have.

In Indore Development Authority v. Manoharlal (2020), Justice Arun Mishra led 5-Judge Bench observed that "from the perusal of debate too, it is apparent that the word 'or' had been understood as 'and'" in Section 24 (b) of the Right to Fair Compensation and Transparency in Land Acquisition, Rehabilitation and Resettlement Act, 2013. Section 24 deals with the situation where "Land acquisition process under Act No. 1 of 1894 shall be deemed to have lapsed in certain cases". Section 24 (2) reads: "Notwithstanding anything contained in sub-section (1), in case of land acquisition proceedings initiated under the Land Acquisition Act, 1894 (1 of 1894), where an award under the said section 11 has been made five years or more prior to the commencement of this Act but the physical possession of the land has not been taken or the compensation has not been paid the said proceedings shall be deemed to have lapsed and the appropriate Government, if it so chooses, shall initiate the proceedings of such land acquisition afresh in accordance with the provisions of this Act: Provided that where an award has been made and compensation in respect of a majority of land holdings has not been deposited in the account of the beneficiaries, then, all beneficiaries specified in the notification for acquisition under section 4 of the said Land Acquisition Act, shall be entitled to compensation in accordance with the provisions of this Act."

Justice Mishra observed, "In case word 'or' is read disjunctively, proceedings shall lapse even after possession has been taken in order to prevent lapse of land acquisition proceedings, once the land has vested in the Government and in most cases, development has already been made. The expressions used in Section 24(2) 'possession of the land has not been taken” and “the compensation has not been paid' are unrelated and carry different consequences under the Act of 1894."

These valuable insights have emerged from torture of 99 % of human becomings and their words by 1 % of the human beings.