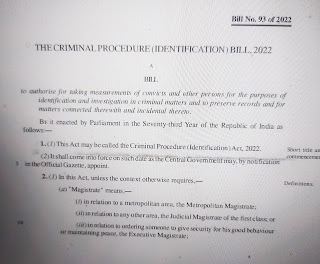 The Criminal Procedure (Identification) Bill, 2022 is a child of non-transparent, anonymous and limitless electoral financing using electoral bonds. Having legalized anonymization of artificial persons, the body corporates, the proposed law makes natural persons including citizens naked. This Bill is linked to Gandhi's first Satyagraha against biometric identification Act. The 2002 Bill aims to authorize for taking measurements of convicts and other persons for the purposes of identification and investigation in criminal matters and to preserve records and for matters connected therewith and incidental thereto. According to Section 2 (b), "measurements" includes finger-impressions, palm-print impressions, foot-print impressions, photographs, iris and retina scan, physical, biological samples and their analysis, behavioural attributes including signatures, handwriting or any other examination referred to in section 53 or section 53A of the Code of Criminal Procedure, 1973.  This definition of measurement indicates that it is linked to DNA Technology (Use and Application) Regulation Bill, 2019 as well. Section 10 of the 2022 Bill states that Identification of Prisoners Act, 1920 stands repealed. In the aftermath of decriminalizing some 60 corporate crimes, the new Bill makes all the natural persons including citizens suspects.

Before joining Indian National Congress, Mahatma Gandhi had opposed biometric identification- fingerprint based registration of Asians in general and Indian and Chinese in particular. In his book, Satyagraha in South Africa, he describes Asiatic Law Amendment Ordinance of 1906 and the Transvaal Asiatic Registration Act under which finger printing of Asians was attempted as a "Black Act." The Black Act was resisted on the grounds of the safety of Indian and Chinese community of South Africa and to resist an intolerable humiliation.

Gandhi’s first Satyagraha was in opposition to British Asiatic Law Amendment Ordinance of 1906 and Transvaal Asiatic Registration Act of 1907. Under the Act every male Asian had to register himself and produce on demand a thumb-printed certificate of identity. The Act required the re-registration of Indians who were currently resident in the colony. The registration documents required photo identification and a full set of fingerprints, and these documents were to be carried at all times, and to be made available to police on demand. Unregistered persons and prohibited immigrants were to be deported without a right of appeal or fined on the spot if they fail to comply with Act.

In many respects, this law amounted to a rational review of existing legislation in the aftermath of a total regime change, and did not, in and of itself, represent unusual discrimination for times, nor unreasonable demands on the population. Gandhi, however, made a repeal of the Black Act a central pillar of his early political activism, which in turn set the stage for a confrontation between the Transvaal Indian Community and the colonial government.

One of the lessons from the Satyagraha and freedom struggle is that law seeking biometric identification of Asians must be resisted. There is a logical compulsion for the Supreme Court to factor in this part of our history.

It must also be factored in that in South Africa, both Indians and Chinese were required by law to register their presence in the Transvaal by giving their fingerprints and carrying their passes. In response to such legal requirement, Gandhi encouraged Indians and Chinese to burn their passes. By this yardstick, it emerges that no political party In India qualifies to be deemed an opposition party unless they burn, boycott or bury the scheme that issues biometric measurement based identification slips carrying unique identification numbers.

History repeats itself in simple ways. Capt Raghu Raman, who was the Chief Executive Officer (CEO) of National Intelligence Grid (NATGRID), Union Ministry of Home Affairs had proposed creation of private territorial armies by commercial czars in his earlier incarnation with Mahindra Special Services Group as part of his previous work titled “A Nation of Numb People”. But the State seems to have gone ahead and has started providing Central Industrial Security Force (CISF), world’s biggest industrial security force to the commercial czars on rent. At this rate how long will it take for the commercial czars to hire Indian Army, Navy and Air Force? In any case they are hiring them post retirement or poaching them in their pre-retirement phase itself. The publications of industry associations have pointed out that NATGRID and biometric identification are linked. Unless the Supreme Court is alive to the writing on the wall, the ramifications of the 2022 Bill are bound to unfold and make their natural fundamental rights redundant.

The way all the agencies are linking demographic and biometric information with identification of citizens it is apparent that a permanent Emergency architecture is unfolding. The electoral database is also being converged. The idea is to make citizens transparent before the all mighty Government so that Government, their servants can remain opaque to safeguard the interests of undemocratic and ungovernable social control technology companies. It is high time judiciary and informed citizens recalled the lesson from Mahatma Gandhi’s opposition to biometric identification.

The author had appeared before the Parliamentary Standing Committee on Finance that examined the National Identification Authority of India Bill and the Parliamentary Standing Committee on Food, Consumer Affairs and Public Distribution that examined the Consumer Protection Bill. He is editor of www.toxicswatch.org and is the convener of Citizens Forum for Civil Liberties which has been working on the subject of biometric identification and surveillance since 2010.