The Coalition for Nuclear Disarmament and Peace (CNDP), India, expresses its grave concern over the events surrounding the mislaunch of an Indian unarmed supersonic cruise missile that landed in Pakistani territory at around 07.20 pm IST on 09 March 2022.

The accident was first brought to light by the Pakistani military establishment through a press conference on the following day (10 March). However, it was only about 48 hours after the incident that the Indian Defence Ministry, through a press statement, chose to confirm the incident describing it as accidental and terming it “deeply regrettable''.

News reports suggest that, since India did not alert Pakistan promptly about the mislaunch as per agreed norms, Pakistani forces initially prepared for a retaliatory strike. However, fortunately, saner heads appear to have prevailed, who recognised that the intrusion into their territory by a flying object was likely not deliberate. That the accident fortunately did not cause any loss of life or strike any military installation also must have helped.

This incident, regardless, exemplifies the perpetually present dangers of a devastating war, between the two nuclear-armed countries.

The CNDP, therefore, demands that the Government of India, as the first step, provide a credible explanation regarding the mislaunch and about its failure to alert the Pakistani Government immediately thereafter in violation of agreed norms.

We also urge the governments of India and Pakistan to immediately work out credible and effective confidence building measures (CBMs), revive the multiple channels of communication to avoid any misunderstandings and set up a functioning joint monitoring mechanism to avert the possibility of a disaster arising out of any accident in future. 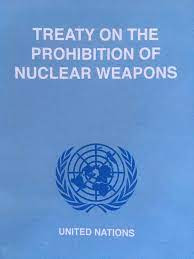 ToxicsWatch Alliance (TWA) endorses the statement of CNDP and appeals to all the nuclear weapon holding and hosting countries and those under their umbrella including India and Pakistan to ratify the UN Treaty on the Prohibition of Nuclear Weapons (TPNW) which entered into force on 22 January 2021. The treaty includes prohibitions on participating in any nuclear weapon activities. These include undertakings not to develop, test, produce, acquire, possess, stockpile, use or threaten to use nuclear weapons. The treaty also prohibits the deployment of nuclear weapons on national territory and the provision of assistance to any State in the conduct of prohibited activities. States parties are obliged to prevent and suppress any activity prohibited under the TPNW undertaken by persons or on territory under its jurisdiction or control. The treaty obligates States parties to provide adequate assistance to individuals affected by the use or testing of nuclear weapons, as well as to take necessary and appropriate measure of environmental remediation in areas under its jurisdiction or control contaminated as a result of activities related to the testing or use of nuclear weapons.

The treaty was adopted by by a vote of 122 States in favour, with one vote against and one abstention) at the UN on 7 July 2017, and opened for signature by the Secretary-General of the United Nations on 20 September 2017.

Amidst pandemic U.S. spent $37.4 billion on nuclear weapons.China spent $10.1 billion. Russia spent $8 billion, U.K. spent $6.2 billion & French $5.7 billion. India, Israel and Pakistan each spent over a billion followed by North Korea that spent $667 million. The nuclear weapon holding and hosting countries and those under their umbrella must ratify the treaty and decommission 14, 500 existing weapons and come out with White Paper on 2,000 nuclear tests and some 495 nuclear reactors.