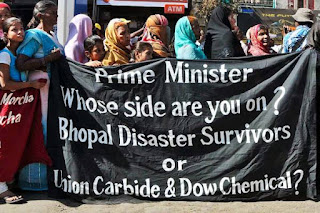 For his valuable & selfless contributions in furthering the cause of the Bhopal gas victims, the Government of India conferred the 2020 Padma Shri Award posthumously to Shri Abdul Jabbar, former Convener, Bhopal Gas Peedith Mahila Udyog Sanghathan.  Jabbar’s wife, Sayra Bano, accepted the award from the Hon’ble President of India, Shi Ramnath Kovind, at the award ceremony held at the Rashtrapati Bhavan in Delhi on 08 November 2021.

Another year has passed without most of the core issues facing the Bhopal gas victims remaining unaddressed even 37 years after disaster of 02/03 December 1984. The poisonous gas leak disaster had resulted in the eventual death of at least 25,000 victims and had caused injuries in varying degree to over 550,000 others. The escape of toxic fumes from a pesticide plant’s storage tank containing about 40 tons of methyl isocyanate (MIC) – an extremely hazardous chemical – had spread to about 40 sq kms of area and had affected two-thirds of the city’s then population of around 900,000. The pernicious impact on flora and fauna in the affected area was equally grave. The pesticide plant was operated by Union Carbide India Limited (UCIL). UCIL was then controlled by Union Carbide Corporation (UCC) – a company now owned by the Dow Chemical Company, a subsidiary of Dow Inc., a giant U.S. multinational chemical company.

Unfortunately, even over three and half decades after the disaster, neither the State nor the Central Government has attempted either to undertake a comprehensive assessment of the ramifications of the disaster or to take necessary remedial measures. The Supreme Court assisted Settlement of 14/15 Feb, 1989 for a sum of 470 million U.S. dollars (then about Rs,705 crores) – based on the assumption that only around 3000 victims had died and another 102,000 had suffered injuries in varying degree – was a complete sham with each gas-victim being finally awarded less than one-fifth of the sum allotted even as per the terms of that unjust settlement.

The current status of issues such as health care, compensation, prosecution of the accused, remediation of the environment, etc., may be briefly recounted as follows:

HEALTH CARE: Apart from the fact that a fairly large health-infrastructure has been built in terms of buildings and number of hospital beds (about 1000 beds exclusively for gas-victims) because of pressure exerted over the years by organizations supporting the cause of the Bhopal gas victims, the quality of health care in terms of investigation, diagnosis, treatment, research and record-keeping continue to be abysmal as ever. The persistent apathy of the Indian Council of Medical Research (ICMR) and the Government of Madhya Pradesh in monitoring the health status of the Bhopal gas victims is shocking to say the least. They have failed to maintain proper medical records of hospitals and clinics through computerization and networking and have failed to supply health-booklet to each gas-victim with his/her complete medical record. That proper protocol for treatment of most gas-related ailments has not been evolved even 37 years after the disaster speaks volumes about the apathetic attitude of the concerned authorities in this regard. Mere symptomatic treatment and over-medication due to lack of proper monitoring has resulted in increasing number of renal failures among gas-victims. What is equally shocking is that even 37 years after the disaster, most of the gas-victims seeking treatment continue to be classed as “temporarily injured” in order to deny them enhanced compensation for permanent injury.

Writ Petition (Civil) No.50 of 1998, which BGPMUS, BGIA and BGPSSS had filed on 14.01.1998 with pleas to restart disaster-related medical research, monitor & record health status of each gas-victim, improve health care facilities, develop appropriate protocol for treatment of each disaster-related ailment, etc., was upheld by the Supreme Court after 14 years of litigation on 09.08.2012. The Petitioners were further directed to pursue the matter before the High Court of Madhya Pradesh (as Writ Petition No.15658 of 2012), a task that BGPMUS & BGPSSS are actively engaged in at present. However, the matter continues to remain pending for the last nine years before the Madhya Pradesh High Court at Jabalpur since the Union of India has repeatedly failed to comply with numerous directions of the Court. As a result, several critical health needs of the gas victims remain largely unattended even 37 years after the disaster.

COMPENSATION: The failure on the part of the Supreme Court to hear the long-pending Curative Petition against the unjust settlement of 14/15 Feb, 1989, has had an adverse impact on the interests of the gas-victims. Curative Petition (Civil) Nos.345-347 of 2010, which was filed by the Union of India on 03 Dec, 2010 to challenge the unjust settlement of 14/15 Feb, 1989 and to seek additional sum of at least another Rs.7728 crores as compensation was last listed before the Constitution Bench of the Court on 29 Jan, 2020. However, the hearing was postponed to 11 Feb, 2020. Sadly, the matter was never listed on that date or ever since then. Failure to dispose of the Curative Petition has also meant the indefinite postponement of the hearing of the Special Leave Petition [SLP(C) No.12893 of 2010] filed on 17 Mar, 2010 by eight members of BGPMUS and BGPSSS seeking enhancement of settlement sum by a factor of five in terms of the magnitude of the disaster as assessed by the Claim Courts and in terms of the gravity of injuries suffered by the gas victims on the basis of their medical records. Failure to dispose of the pending Curative Petition and the SLP for over a decade has effectively denied the gas-victims several thousands of crores of additional compensation that they are legitimately entitled to.

CRIMINAL CASES: The pace at which the pending criminal cases against the perpetrators of the Bhopal disaster are proceeding is concerned, there is not the faintest hope that they would ever be prosecuted in their life time since the whole process has become an almost complete farce. On the thirty-seventh anniversary of the Bhopal disaster, the gas-victims still fervently hope that all those who have the power to render justice to the gas-victims will not be found wanting in fulfilling their obligations.

ENVIRONMENTAL REMEDIATION: The environment in and around the former Union Carbide pesticide plant continues to remain contaminated with toxic waste, which was stored/buried within the plant premises as well dumped in the solar evaporation pond (dug outside the plant and lined with thin plastic sheets) during the operation of the plant from 1976 to 1984. In a preliminary study titled “Assessment and Remediation of Hazardous Waste Contaminated Areas in and around M/s Union Carbide India Ltd., Bhopal” that was jointly carried out by the National Environmental Engineering Research Institute (NEERI), Nagpur, and the National Geophysical Research Institute (NGRI), Hyderabad, during 2009-2010, it was estimated that “the total quantum of contaminated soil requiring remediation amounts to 11,00,000 MT [metric tons]”(p.68). Another 345 tons of toxic waste is stored in a shed within the plant. Representatives of BGPMUS and BGPSSS met Shri Vishvash Sarang, Minister, Bhopal Gas Relief & Rehabilitation Department, on 29.11.2021 and urged him to take the initiative in holding a workshop of all concerned parties, including international experts, to propose ways and means to remediate the contaminated site. It is hoped that the State Government would respond positively to the proposal since necessary technical expertise is available for the purpose.

Under the Circumstances, We Demand:

Speedy implementation of the Supreme Court Order dated 09 Aug, 2012 in Writ Petition (Civil) No.50 of 1998, which had directed the Union of India to provide the best medical care to the gas-victims;

Speedy Disposal of Curative Petition (Civil) Nos.345-347 of 2010, which is currently pending before the Supreme Court of India, for enhancement of compensation and for remediation of the contaminated site in and around the UCIL plant at Bhopal;

Setting up of a Special Court for speedy trial and prosecution of all the accused, who are responsible for causing the Bhopal disaster.

Proper rehabilitation of all needy gas-victims, especially widowed gas-victims; and

Provision of safe drinking water, free medical care and compensation to all victims of contaminated water and toxic waste.