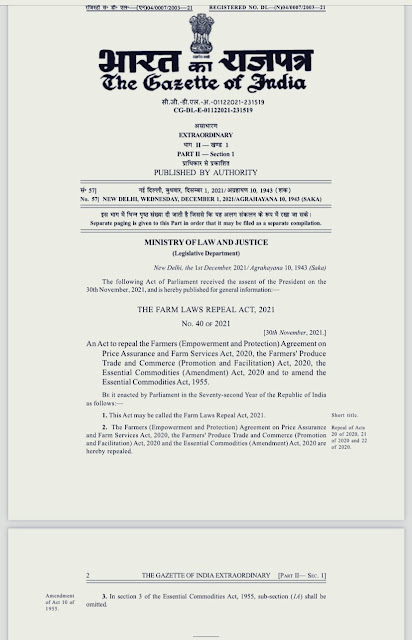 The President of India who had promulgated and later given assent to the three black farm laws in 2020 has now given assent to The Farm Laws Repeal Act, 2021. With this the anti-agriculturist laws have been repealed with immediate effect. The autocratic manner in which the three laws were enacted caused massive outrage across the globe. The implementation of these laws were suspended by the Supreme Court in January 2021. The constitutionality of the enactment of these laws is yet to determined by the court. Several state assemblies have passed resolutions against these three laws.

Between ther the enactment of these laws, their suspension and repeal some 700 agriculturists have lost their lives.

The protest of the agriculturists has compelled the Prime Minister to realise that the Farmers’ Produce Trade and Commerce (Promotion and Facilitation) Ordinance, 2020 which was promulgated on June 5, 2020 to provide for barrier-free trade of farmers’ produce outside the markets notified under the various state agricultural produce market laws (state APMC Acts) did not serve the interest of the farmers.  The Ordinance and later the Act was to prevail over state APMC Acts.

This flawed legislation allowed intra-state and inter-state trade of farmers’ produce outside: (i) the physical premises of market yards run by market committees formed under the state APMC Acts and (ii) other markets notified under the state APMC acts such as private market yards and market sub-yards, direct marketing collection centres, and private farmer-consumer market yards.  This law was to facilitate trade in any place of production, collection, and aggregation of farmers’ produce including: (i) farm gates, (ii) factory premises, (iii) warehouses, (iv) silos, and (v) cold storages.

It defined a farmer as a person engaged in the production of farmers’ produce by self or by hired labour.  A farmer producer organisation means an association or group of farmers which is: (i) registered under the law, or (ii) promoted under a scheme of the central or state government.

To trade in scheduled farmers’ produce (agricultural produce specified and regulated under state APMC Acts), the repealed law provided that an entity must be either: (i) a farmer producer organisation or agricultural cooperative society, or (iii) a person having permanent account number under the Income Tax Act or any other document notified by the central government.

The repealed law made a provision for  electronic trading of farmers’ produce in the specified trade area wherein  electronic trading and transaction platform could set up to facilitate the direct and online buying and selling of farmers’ produce through electronic devices and internet for physical delivery of the farmers’ produce.  It allowed the following entities to establish and operate such platforms: (i) companies, partnership firms, or registered societies, having permanent account number under the Income Tax Act or any other document notified by the central government, and (ii) farmer producer organisation or agricultural cooperative society.

The dispute resolution mechanism under the repealed law was deemed quite controversial: The parties involved in a trade-related dispute were to apply to the Sub-Divisional Magistrate for relief through conciliation.  The Magistrate was supposed to appoint a Conciliation Board and refer the dispute to the Board.  If the dispute remains unresolved after 30 days, the parties were to approach the Magistrate for settlement of the dispute.  The parties had a right to appeal against the decisions of the Magistrate before an Appellate Authority (Collector or Additional Collector nominated by the Collector). This provision breached the doctrine of separation of powers between the executive and the judiciary.

The Farmers (Empowerment and Protection) Agreement on Price Assurance and Farm Services Act, 2020 is an act of the Indian Government that creates a national framework for contract farming through an agreement between a farmer and a buyer before the production or rearing of any farm produces.

An Act to provide for a national framework on farming agreements that protects and empowers farmers to engage with agri-business firms, processors, wholesalers, exporters or large retailers. It was first promulgated by the Union Cabinet on 5 June 2020.

The Lok Sabha approved both bills on 17 September 2020, and Rajya Sabha on 20 September 2020. For the latter, the Official Opposition demanded physical voting instead of voice voting, but to no effect. Voting rules of Rajya Sabha state that members of the House can challenge the voice voting decision, in which case the votes need to be recorded. The Vice-Chairman of the Rajya Sabha passed the Bill with only voice voting and claimed that the Opposition had created chaos since the rules state that division voting required all members to remain seated while maintaining decorum. Subsequently, this claim was found to be factually incorrect.

The Government had claimed that the Act helps protect farmers engaging with agribusiness firms, processors, wholesalers, exporters, or large retailers for farm services and sale of future farming produce by a mutually-agreed lucrative price framework fairly and transparently through a contract.

The Act faced bitter criticism from farmers because it overlooked farmer's interests.

Since the Appellate Authority under the repealed law was the highest level of appeal for the farmer against any private entity, the farmer is effectively prevented from moving the Court. The Act was highly skewed in favor of private entities as the individual farmers did not have the resources that private companies had.

The repealed Essential Commodities (Amendment) Act, 2020 was originally promulgated as an Ordinance  on June 5, 2020.  It amended the Essential Commodities Act, 1955.  The Act empowered the central government to control the production, supply, distribution, trade, and commerce in certain commodities.  The Act sought to increase competition in the agriculture sector.  It aimed to liberalise the regulatory system.

The Act empowered the central government to regulate the stock of an essential commodity that a person can hold.  The repealed Act required that imposition of any stock limit on certain specified items must be based on price rise.  A stock limit may be imposed only if there is: (i) 100% increase in retail price of horticultural produce; and (ii) 50% increase in the retail price of non-perishable agricultural food items.  The increase were to be calculated over the price prevailing immediately preceding twelve months, or the average retail price of the last five years, whichever is lower.

In effect, it decriminalized hoarding of food grains and allied commodities because the repealed Act provided that any stock limit will not apply to a processor or value chain participant of agricultural produce if stock held by such person is less than the: (i) overall ceiling of installed capacity of processing, or (ii) demand for export in case of an exporter.

After the repeal of these farm laws, farmers protest is going to remain focused on demand for right to guaranteed remunerative minimum support price and freedom from indebtedness laws.