ToxicsWatch gave it's testimony at "The People’s Health Hearing: Health Justice means Climate Justice". The hearing is part of People's Summit for Climate Justice organised by UK based #COP26 Coalition on 7th November. There was  testimony by Patricia Miranda, Celestine, Paul Belisario, Raki,
Mafel and Minda as well. Ben Eder, Abi  Deivanayagam and his colleagues from the coalition co-organised it. 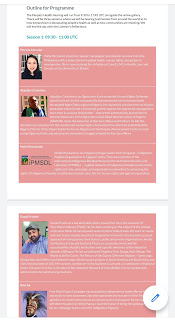 Gopal Krishna of ToxicsWatch observed that deafening silence on fake solutions for climate "crisis" is indefensible, inexcusable, unpardonable, unethical and immoral. The carbon trade is fraudulent. It is a fake solution to the crisis. The public hearing was held in the backdrop of UK hosting the 26th UN Climate Change Conference of the Parties to UNFCCC (COP26) in Glasgow. The conference commenced on 31 October and concludes on 12 November.

Having failed in complying with commitments under Kyoto Protocol 2005-2020, the 26th Conference of Parties (COP-26) of UN Framework Convention on Climate Change (UNFCCC), effective from 1994 has brought parties to UNFCCC together to accelerate action towards the goals of the Paris Agreement effective from 2016 under the UNFCCC in order to combat climate crisis. UNFCCC adopted in 1992 has 197 parties but 165 signatories.

The Paris Agreement was adopted by 196 Parties at COP 21 in Paris, on 12 December 2015. It entered into force on 4 November 2016. The fact remains that it commenced in 2021 only after the end of the second commitment period under the Kyoto Protocol in 2020. At present, there are 193 parties to the Paris Agreement.

The Agreement's goal is to limit global warming to well below 2, preferably to 1.5 degrees Celsius, compared to pre-industrial levels.

To achieve the long-term temperature goal, countries aim to reach global peaking of greenhouse gas emissions to achieve a climate neutral world by 2050. These aims are akin to aiming for the sky but not reaching even the mountains.

Given the fact that Paris Agreement works on a 5- year cycle of climate action carried out by countries, the countries were supposed to submit their plans for climate action known as nationally determined contributions (NDCs) by 2020. 194 parties have submitted their first NDCs. Eritrea is not a party to Paris Agreement but has submitted its first NDC. Only 13 parties have submitted their second NDCs. India submitted its first NDC in October 2016 but it is yet to submit it's updated 2030 targets. It missed the deadline of October 12, 2021.

In their NDCs, countries communicate actions they will take to reduce their Greenhouse Gas emissions in order to reach the goals of the Paris Agreement. Countries also communicate in the NDCs actions they will take to build resilience to adapt to the impacts of rising temperatures. Unless NDCs are made legally binding and makes body corporates directly liable, NDCs will meet the fate of promises made under Kyoto Protocol.

The invitation of the Paris Agreement  to formulate and submit by 2020 long-term low greenhouse gas emission development strategies (LT-LEDS) is just a charitable public relations exercise.

LT-LEDS provide the long-term horizon to the NDCs. Unlike NDCs, they are not mandatory. Some jurists have pointed out for long that international law is no law, the experience with mandatory Kyoto Protocol vindicates their stance. Paris Agreement and NDCs under it are weaker than commitments under Kyoto Protocol.

The Paris Agreement provides a framework for financial, technical and capacity building support to those countries who need it. The Agreement being voluntary in nature, the framework remains an empty shell.

The Paris Agreement reaffirms that developed countries must take the lead in providing financial assistance to countries that are less endowed and more vulnerable. Climate finance is needed for mitigation, because large-scale investments are required to significantly reduce emissions. Climate finance is equally important for adaptation, as significant financial resources are needed to adapt to the adverse effects and reduce the impacts of a changing climate. Unmindful of climate injustice by rich nations at least since 1750, these countries remain trapped in a business as usual mode.

The Paris Agreement has vision for technology development and transfer for both improving resilience to climate change and reducing GHG emissions. It is akin to verbal assurance.

With the Paris Agreement, countries established an enhanced transparency framework (ETF). Under ETF, from 2024, countries are supposed to report transparently on actions taken and progress in climate change mitigation, adaptation measures and support provided or received. It is a post dated cheque.

To achieve the goals of the Paris Agreement, the years since its entry into force countries, regions, and cities are establishing carbon neutrality targets. The firms are doing so as part of their corporate  social responsibility and for ethical positioning of their brands. Zero-carbon solutions has entered the imagination of economic sectors. But ground reality reveals gulf between fertile imagination, pious intention and implementation.

The poverty of imagination displayed by heads of nation states and corporations in the aftermath of the publication of study of first working group as part of Sixth Assessment Report (AR6) of the UN's Intergovernmental Panel on Climate Change (IPCC) that has provided assessment of scientific, technical, and socio-economic information concerning climate crisis, is disconcerting. The study titled "Climate Change 2021: The Physical Science Basis" released on 9 August 2021 states that the only way to avoid warming of 1.5 °C or 2 °C is to undertake radical cuts (of upto 50 ℅ by 2030 and 100 ℅ by 2050) in greenhouse gas emissions to prevent irreversible climate disruption. Global temperature is expected to peak  at 1.6°C during 2041-2060.

The public hearing engaged with the memory of communities, and nature to confront inequality and injustice.