Executive makes Parliament subservient, Farm Laws Repeal Act yet to be notified in Gazette of India

On November 29, 2021, the 6-page long The Farm Laws Repeal Bill, 2021 was passed without any discussion in the Parliament. At the time of the enactment of these three black laws too, Rajya Sabha was silenced for 20 minutes in an an autocratic manner on one of the blackest days of the Indian Parliament. It is quite evident that Union Government is not allowing Union Parliament to discuss it's acts of omission and commission. Given the fact that the text of the Farm Laws Repeal does not mention it's date of entry into force, it gives rise to a suspicion regarding the intent of the Union Executive.

It may be recalled that in 1995 the union executive 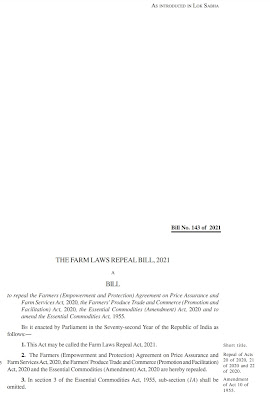 established the National Environment Tribunal (through the National Environment Tribunal Act 1995) to provide for strict liability for damage arising out of accidents caused from the handling of hazardous substances. Although Parliament passed this law, it was never notified in the Gazette of India revealing the supremacy of Union Executive over Union Parliament. Union Executive may resort to similar trick in the case of the Farm Laws Repeal Act.

A report of the Parliamentary Standing Committee on Subordinate Legislation reveals that Union Executive has blatantly and impudently acted beyond the ambit of laws passed by the Union Parliament, the Constitution of India and constitutionalism on numerous occasions with impunity. Such immoral, unethical, illegitimate and unconstitutional conduct of Union Executive does not inspire confidence. Had it been sincere it ought to have  withdrawn the Land Acquisition (Amendment) Bill, 2015 and illegitimate provision of electoral bonds as well. All the legislations and subordinate legislation passed during lockdown is yet to be subjected to rigorous legislative scrutiny.

In such a backdrop, the "repeal" of the three black farm laws must not be deemed to be repealed unless its repeal is notified in the Gazette of India. Although belated even at this stage Supreme Court ought to pronounce all the farm laws as unconstitutional. Union Judiciary ought to refrain from accepting fait accompli being presented to it by the Union Executive.