Anthropocentric parochialism of homo economicus, the body corporates and the frozen Westphalian nation state framework continue to envelop all efforts to combat climate crisis. The deal arrived at the 26th conference of the Parties to UNFCCC-United Nations Framework Convention on Climate Change (COP26) during its closing plenary session in Glasgow on November 13, 2021 (local time) had been accepted by some 200 nations who are parties to the convention. The dilution of the language of the legal text through replacement of "phase out" of coal power with “phase down” of coal power, the single biggest source of greenhouse gas emissions revealed the complicity of the 37 countries which had failed to comply with their obligations under the second commitment period of the Kyoto Protocol that ended in December 2020. The outcome of COP26 is available at:https://unfccc.int/process-and-meetings/conferences/glasgow-climate-change-conference-october-november-2021/outcomes-of-the-glasgow-climate-change-conference

These countries appear to be acting as mouth pieces of their corporations who remain callous towards the goal to limit warming to 1.5°C (since pre-industrial times). It is apparent that India was used by the corporations of these countries to weaken the final agreement. These corporations are anonymous donors of ruling parties in India. Such immoral and unethical  anonymous financing faces challenge in the Supreme Court of India. Anonymous funding of political parties is the modern version of the rotten or pocket borough, also known as a nomination borough or proprietorial borough used by donors to gain unrepresentative influence. These corporations have inherited such practices from UK, Ireland and USA. The dissenting order of Justice John Paul Stevens in

Citizens United v. Federal Election Commission had warned that the majority ruling of the Supreme Court of USA will “undermine the integrity of elected institutions across the Nation.” He contended that the majority order overestimated the notion of corporate democracy and the powers of shareholders to vote and bring derivative suits against corporate officers. He wrote, “The Court’s blinkered and aphoristic approach....will undoubtedly cripple the ability of ordinary citizens, Congress, and the States to adopt even limited measures to protect against corporate domination". Stevens’s opinion was joined by Justices Stephen Breyer, Ruth Bader Ginsburg, and Sonia Sotomayor.

Although the court wished that citizens should see whether elected officials are “ in the pocket’ of so-called moneyed interests”, the donors of “dark money” have overwhelmed the capacity of socio-political organizations, public institutions and the citizens.

In India, illegitimate "dark money" of anonymous donors has been "legalised" through amendments in the Companies Act, 2013.

These donors have been using one country or another to block action against the climate crisis. Now it is out in open.

It may be recalled that it was under the influence of US corporations that carbon trade was included in the Kyoto Protocol in order to appease USA to ratify the treaty but it took EU and others for a ride by withdrawing from it after getting the Protocol diluted. Carbon trade is a fake market solution for climate crisis. The 11 page long 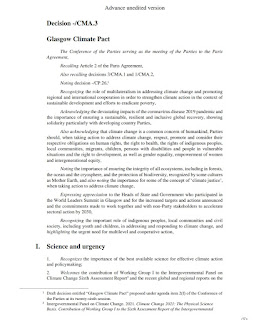 Glasgow Climate Pact's acceptance of carbon trading as a fait accompli shows that it remains caught in a fake solution.

In such a backdrop, it is not surprising that U.S. climate envoy observes, "It’s a good deal for the world" unmindful of the fact that world has warmed 1.1°C compared to pre-industrial times.

Unless civilisational alliances are forged beyond static Westphalian nation state framework recognising the rights of mother earth and undemocratic body corporates are made subservient to truly democratic will drawing on deeper philosophical insights, there can be no solution to climate crisis.

The author is a law and public policy researcher who has been tracking and critiquing climate negotiations since 1999.