skip to main | skip to sidebar
Home » WASTE TO ENERGY » Combustion based biomass waste to energy plant in Agra, a public health disaster

Combustion based biomass waste to energy plant in Agra, a public health disaster

Approval for combustion based waste to energy plant in Agra, Uttar Pradesh is an invitation to public health and environmental disaster from heavy metals like Mercury, greenhouse gases and persistent organic pollutants (POPs) like Dioxins. It is apparent that Supreme Court's order of 18 February, 2021 is an unreasoned order.

The court ought to have factored in recommendations of Supreme Court's Waste to Energy Committee. It seems the petitioner and the concerned authorities did not inform the court about the necessity to comply with the UN's Minamata Convention, UN Framework Convention on Climate Change, Paris Agreement and Stockholm Convention on POPs. This biomass waste based power plant violates these UN treaties. It ignores the White Paper on Air Pollution in Delhi. The same public institutions feign to be alarmed when air pollution from biomass burning envelopes the cities.

In Writ Petition (C) No.13381/1984, the 3-Judge Bench of Chief Justice and Justices A. S. Bopanna and V. Ramasubramanian  passed an order saying, "the  Agra Nagar Nigam has prayed for permission to establish waste to energy plant & construction and demolition plant in Kuberpur landfill site at Agra. Mr.  Tushar Mehta, learned Solicitor  General  of India has pointed out to a letter dated 08.01.2021 by which the Vice-Chairman of the Agra Development  Authority has written to the Municipal Commissioner, Agra, stating that an application may be filed again in the Taj Trapezium Zone (TTZ) after taking permission from this Court for the establishment of the plant."

The bench observed, "We find that this   question is squarely covered by our   order dated 06.12.2019 in which this Court has clearly stated that there shall be no impediment for the authorities to consider the pending essential environmental clearance which are necessary to secure   essential  amenities within Taj Trapezium Zone (TTZ). This Court also observed that not allowing construction of such basic infrastructure can itself create new polluting waste and threaten the environment. We are informed that the Agra Nagar Nigam has obtained all necessary clearances."

Its order states: "In  these circumstances, we consider it  appropriate to grant the application. The applications for directions are therefore allowed in terms of prayer 13(a) which reads:Allow to the applicant to establish waste to energy plant & construction &  demolition plaint in Kuberpur landfill  site at Agra in accordance with law."

Having been a participant at the public hearing for a similar plant in Agra, one can predict that construction of this toxic plant in the city of Taj Mahal will face bitter public resistance for environmental health protection. 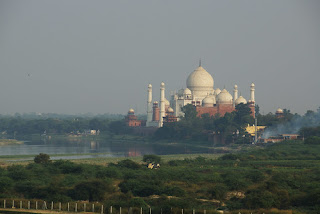