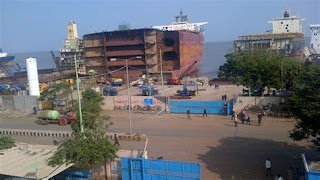 Subject: Threat to Indian maritime environment and security from viral diseases like covid-19 from ballast water and toxic substances

I wish to submit that according to this legal provision no ship is allowed to install or use “prohibited hazardous materials”. It defines “ship” as “a vessel and floating structure of any type whatsoever operating or having operated in the marine environment and includes submersibles, floating craft, floating platforms, self-elevating platforms, the floating storage units, and the like.” Besides the threat of hazardous substances the ship in question poses a threat of covid-19 like viral disease from the ballast water of the ship. It is note withy that IMO’s Ballast Water Management Convention entered into force in September 2017, which requires that ships have to manage their ballast water to avoid the transfer of potentially invasive aquatic species.  Ships take on ballast water at sea to maintain stability and minimize stress on the hull. This water may carry virus and bacteria to new locations, a process linked with deadly outbreaks of diseases among humans as well as threats to the marine environment.

I submit that the ship in question comes under the ambit the law. This vessel in question is currently owned by SOMAP International Pte Ltd, a Singapore-based company. It renamed the vessel as “J Nat” (ex- Jesslyn Natuna). Prior to this this vessel operated in the Natuna gas field under the ownership of Global Niaga Bersama PT, an Indonesian company.

I submit that the preamble of the Recycling of Ships Act refers to the Ship-breaking Code which regulates the recycling of ships in India. The Act does not override the pre-existing Code which was framed in compliance with the order of Hon’ble Supreme Court of India. It is concerned with only those limited aspects that are not covered under the Code. It acknowledges the need “for the protection of environment and human health and safety during the process of recycling of ships”. It defines “hazardous material” as “any material or substance, which is liable to cause harm to human beings, other living creatures, plants, micro-organisms, property or the environment.”

I submit that with the enactment of the Recycling of Ships Act and ratification of International Maritime Organisation (IMO)’s Hong Kong International Convention for Safe and Environmentally Sound Recycling of Ships in November, 2019 by India, one of the world's five major ship recycling countries has made Alang beach deeply vulnerable. The Act came into force on December 16, 2019.

I submit that in an order dated 30th July, 2012, Chief Justice of India headed Bench of Hon'ble Supreme Court of India has directed that "....the concerned authorities shall strictly comply with the norms laid down in the Basel Convention or any other subsequent provisions that may be adopted by the Central Government in aid of a clean and pollution free maritime environment, before permitting entry of any vessel suspected to be carrying toxic and hazardous material into Indian territorial waters" in Union of India & Ors. Vs. Research Foundation for Science [I.A. Nos.61 & 62 of 2012]. Hon’ble Court’s order that led to framing of Shipbreaking Code also seeks “Confirmation to the effect that ballast water has been exchanged in the high seas”. I was an applicant in these cases.

I wish to also draw your attention towards UN’s Basel Technical Guidelines under the UN’s Basel Convention. At page 49-50, the Guidelines specifically points out: Ballast water which is fresh, brackish or marine water that has intentionally been brought on board a ship in order to adjust the ship’s stability and trim characteristics in accordance with various operating conditions “may contain pollutants, such as residual fuel, cargo hold residues, biocides, oil and grease, petroleum hydrocarbons, and metals (e.g. iron, copper, chromium, nickel, and zinc). Ballast water in cargo tanks (oil) is referred to as dirty ballast water. The transport of large volumes of water containing organisms from shallow, coastal waters across natural oceanic barriers can cause massive invasions of neritic marine organisms. Because ballast water is usually taken from bays and estuaries with water rich in animal and plant life, most ships carry a diverse assemblage of aquatic organisms. Aggregate sediments typically found in ballast tanks will contain living species which reflect the trade history of the vessel.”
It further adds: ‘The arrival condition of the dismantling candidate is most likely that of “in ballast”. The discharge of ballast water/ sediment species into the coastal sea-area may be a potential source for introducing unwanted organisms which threaten the ecological balance in the surrounding seas and thereby represent a direct threat to biodiversity. Ballast water can be the carrier of viruses and bacteria transferred to humans causing epidemics. In order to limit the biological threat represented by the introduction of invasive species via ballast water, the vessel should undergo recommended de-ballasting in accordance with IMO Assembly Resolution A.868(20): “Guidelines for the control and management of ships ballast water to minimise the transfer of harmful aquatic organisms and pathogens”, unless other regulations apply. It has been noted that some 32 end-of-life ships came to Alang beach during April-June 2020. ’As inquiry ought to be undertaken to ascertain whether the end-of-life ships which have been arriving during the lockdown period complied with these laws, regulations, guidelines and orders to take remedial containment measures.

I submit that the ship owners generally try escape decontamination cost and evade responsibility and accountability for the trafficking of toxic ships by misleading Indianauthorities. There is an immediate need to ensure that such hazardous ships are not dumped in ecologically fragile Indian coastal beach environment territory.

I submit that India is being turned into a dumping ground of foreign hazardous wastes because of the gullibility of Directorate General of Foreign Trade and Ministry of Commerce and Ministry of Environment, Forests and Climate Change. They have attempted to legalise such dumping through series of amendments in the Hazardous Waste Management & Handling Rules under Environment (Protection) Act, 1986 at the behest of hazardous waste traders. This takes a heavy toll on the ecosystem of Alang beach, Bhavnagar, Gujarat and the inter-state migrant workers who work there under dirty, degrading and dangerous situations who worked even during the covod-19 lockdown. The concerned authorities ought to be also on alert against movement of bio-weapons and chemical weapons in disguise towards Indian waters.

In such a backdrop, I wish to request you to ensure that such ships do not enter Indian waters in order to safeguard India’s maritime environment and security from invasive species and virus.

Thanking you in anticipation.