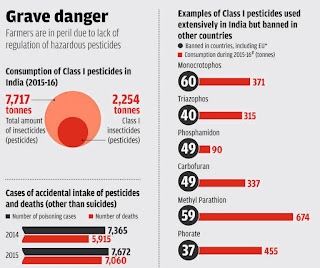 With reference to the above-mentioned subject, I have learnt about the objections raised by you. In the interest transparency, I wish to request you to share your letter/contents of the letter in which you have found the Draft Gazette Notification of the Ministry of Agriculture and Farmers Welfare banning 27 hazardous pesticides questionable.

I submit that pesticides/insecticides are regulated under Insecticides Act, 1968. According to this law the mandate with regard to regulation and prohibition has been given to Ministry of  Agriculture. It  is empowered to  take  such  decisions.  It is apparent that your letter is in violation of the Insecticides Act.

I submit that Ministry of Agriculture and Farmers Welfare has taken steps in compliance with the law. It has appointed a Committee to review pesticides. The review the Committee’s report on the  pesticides and the issuance of Draft Notification seeking   comments, within a time period is in pursuance of ministry's mandate.
Its intiative to undertake Public Consultation on a matter of environmental health and public health of present and future generations is unambigously unquestionable and incontrovertible.

I submit that Ministry of Chemicals and Fertlisers too must learn from the exemplary conduct of the Ministry of Agriculture and Farmers Welfare and ought to follow similar consultative  process,  with  regard  to  pesticides  and  relevant policies before   permitting establishment   of   industries  that produce hazardous  products.

I submit that you have failed to appreciate the concerns of Ministry  of  Agriculture and Farmers Welfare that has factored in the hazardous impact of usage of toxic chemicals and the risks they pose to environmental health and human health.

I submit that all the  27 pesticides in question are highly  hazardous  pesticides and are already banned in several other countries. It paves the way for review of all other pesticides registered in India with the same criteria used for assessing the 27 chemicals for issuance of stringent regulatory measures and prohibitions.

I submit that the draft order for banning 27 pesticides on May 14 2020 and seeking comments and suggestions from those who are likely to be affected by the decision to undo risk to humans, animals and environment.

I submit that given the fact that these 27 listed pesticides are highly hazardous with potential to cause severe health problems such as hormonal changes, carcinogenic, neurotoxic, reproductive and developmental health effects as well as environmental impacts such as toxic to bees, the decision is praiseworthy. It is noteworthy that better alternatives are available for all of them which are proposed to be banned including insecticides, fungicides and weedicides: 2,4-D, acephate, atrazine, benfuracarb, butachlor, captan, carbendazin, carbofuran, chlorpyriphos, deltamethrin, dicofol, dimethoate, dinocap, diuron, malathion, mancozeb, methimyl, monocrotophos, oxyfluorfen, pendimethalin, quninalphos, sulfosulfuron, thiodicarb, thiophante methyl, thiram, zineb and ziram.

I submit that you have failed to appreciate that some of these hazardous chemicals are already addressed by state-level regulations and bans. It is noteworthy that in 2018, Punjab had sought to review licenses, to not to issue fresh licenses for 2,4-D, benfuracarb, dicofl, methomyl and monocrotophos, which are among the 27 listed pesticides. Maharashtra has prohibited monocrotophos and acephate in 2017 because of the high-incidence of pesticides-poisoning among cotton farming community. Kerala has banned monocrotophos, carbofuran, atrazine and a few others.

You may recollect that Monocrotophos, the insecticide was responsible for the Mid Day Meal tragedy on July 16, 2013 at the Dharma Sati Primary School Mashrak, Chapra in Saran district, Bihar.

In a significant and related development, on August, 29, 2016, Shri Vijay Anand Tiwari, Additional District Judge II of Saran (Chhapra) Court, Bihar in a 49 page long verdict sentenced Mina Devi, Gandaman primary school principal to 10 and 7 years imprisonment in connection with the 2013 midday meal tragedy, in which 23 children had died after eating soyabean vegetable. The court makes mention of Monocrotophos, the pesticide in question and underlines that the food that caused the death of 23 students was contaminated with this pesticide.
The verdict is available at
http://services.ecourts.gov.in/ecourtindia/cases/display_pdf.php?filename=/orders/201000046462014_1.pdf&caseno=SESSION%20CASE/4646/2014&cCode=2&appFlag=

It is high time our country stopped transboundary movement of hazardous chemicals by creating an inventory of hazardous chemicals besides conducting an environmental and occupational health audit along with the ministry of health to ascertain the body burden through investigation of industrial chemicals, pollutants and pesticides in umbilical cord blood. In one such study in the US, of the 287 chemicals detected in umbilical cord blood, 180 were known to cause cancer in humans or animals, 217 are toxic to the brain and nervous system, and 208 cause birth defects or abnormal development in animal tests. Absence of such studies in India do not mean that a similar situation does not exist in India. Until and unless one diagnoses the current unacknowledged public health crisis, how will the regulatory bodies predict, prevent and provide remedy.

I submit that our ecological space is a living entity but it is faced with the cannibalistic propensities of illegitimately totalitarian scientism which is married with political consensus. Its linear, piecemeal and closed technological thinking fails to acknowledge that no unlimited development is possible in the nature of things.

I earnestly request you to resist the influence of lobbying by industry associations which give priority to profit over any human and environmental cost.

In view of the above facts and the ongoing food chain poisoning, I urge you to review and revise your position to protect public health of the present and future generations.

In view of the above, I submit that you have been misled about the apparent suddenness of the proposed ban. The process has been underway for a long time. This process entails review of 282 pesticides which are registered for use. The process has created a compelling logic to ban the 27 pesticides. It also creates a compelling logic to withdraw your letter which has been drafted in hurry as a consequence of wrong advice. Acknowledgement of genuine error in supreme public interest has always been appreciated.