Critique of Draft EIA/EMP Report of Expansion Of Power Plant from 16 MW To 40 MM (Waste To Energy) of Near Okhla STP, Okhla, New Delhi 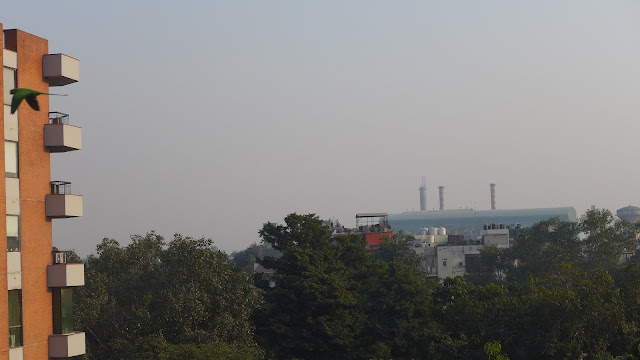 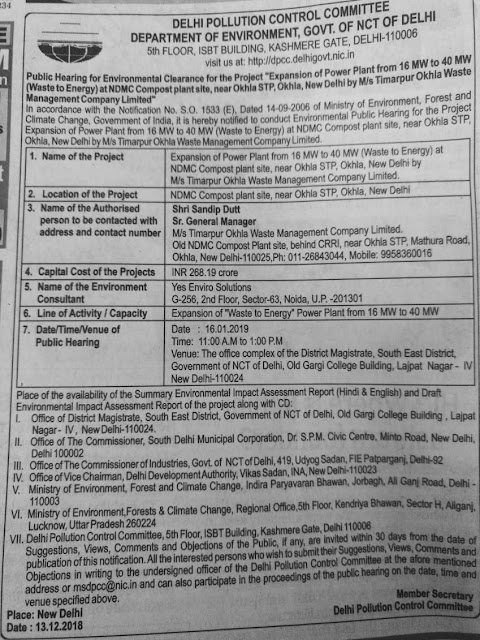 General Condition reads: In case of diversion or alteration in the project including the implementing agency, fresh references should be made to Ministry for modification in the clearances conditions or imposition of new one for ensuring environmental protection. The project proponents should be responsible for implementing the suggested safeguard measures.

Status of Compliance:  Although there has been admitted “diversion or alteration in the project including the implementing agency” especially with regard to technology, no fresh references has been made to Ministry for modification in the clearances conditions or imposition of new one for ensuring environmental protection.

This violation of Environment Impact Assessment Notification, 2006 is part of ongoing violations by this project proponent from the very outset. This fact has been admitted by the Union Minister of Environment & Forests in his letter to the Chief Minister of Delhi.

Incentives include "Accelerated Depreciation: Tax depreciation rate of 80% under AD benefits besides concessional Custom Duty Exemption and GST. Waste to Energy projects draws 5% GST besides availing concessional custom duty which would help the promoters / developers to avail these concessions to improve economic viability of the projects.

According to the amended Tariff Policy, Distribution Licensee(s) are required compulsorily procure 100% power produced from all the Waste-to-Energy plants in the State, in the ratio of their procurement of power from all sources including their own, at the tariff determined by the Appropriate Commission under Section 62 of the Act. The Central Electricity Regulatory Commission (CERC) vide notification dated 07th October 2015 and 31st March 2015 have notified norms for determination of Generic Tariff for MSW, RDF and Biogas based WTE projects along with Generic Tariff for FY 2016-17. The Levelised Tariff which is in the range of Rs.6.50 to Rs.7.60 per unit."

When asked about the modes of financing, existing financial support available and possible options for funding capital and operation & maintenance costs with respect to W to E Plants, the Ministry stated: "The Government of India, through various schemes extends financial support for introducing appropriate solid waste management systems and for setting up processing and disposal facilities. These include Viability Gap Funding Swacch Bharat Mission of MoUD,  Loan from IREDA, Grants from MNRE for Supporting W to E Projects and Preferential Tariff by Regulators besides support for Purchase of Compost from Ministry of Agriculture.

As per the admitted legal requirement, the project proponent’s thermal power plant in question is supposed to comply with standards laid down under Air (Prevention & Control of Pollution) Act 1981 besides requirements under Hazardous and Other Wastes (Management and Trans boundary Movement) Rules, 2016 Solid Waste Management Rules, 2016 and Public Liability Insurance Act, 1991. In the light of the replies given in the Parliament by Union Environment Minister and the verdict of the National Green Tribunal, the claim about there being “marginal impacts on Air, water, land and noise….” Made in the report of Jindal Company’s Draft EIA report dated September 2018 is factually wrong.

Union Minister of Environment, Forests, and Climate Change, in a written reply to a question in Lok Sabha has informed, “Government  is  aware  of  the  reports  published  by  the  World  Health  Organization (WHO)  and  the  Health  Effects  Institute  (HEI)  regarding the  impact  of  air  pollution  on  human health in  terms  of  higher  casualty  rate  due  to  air  pollution.  The reports are based on models, simulations and extrapolations. The Central Pollution Control Board (CPCB) has carried out epidemiological studies to assess the impact of pollution on human health. Air Pollution could be one of the triggering factors for respiratory ailments and associated diseases. However, there are no  conclusive  data  available  in  the  country  to  establish  direct  correlation  between diseases and air  pollution. Health  effects  of  air  pollution  are  generally  synergistic  manifestation  of  the  individual’s food habits, occupational habits, socio-economic status, medical history, immunity, heredity, etc.” WHO’s Ambient Air Pollution database has been marked National Capital Region of Delhi as the most polluted city in the world with an annual particulate matter (PM) 2.5 level of 153 μg/Nm3. The pollution had spiked beyond acceptable limits with dangerous PM 2.5 and PM 10 levels hitting 999 μg/Nm3, while the safe limits for those pollutants are 60 and 100 respectively.[4] A 2010 study conducted by the Boston-based Health Effects Institute (2010) has estimated that about 3000 premature deaths occur in Delhi due to air pollution related diseases. This works out to about 8 deaths per day in Delhi alone relating to air pollution related diseases. This year again, levels of PM 2.5 in Delhi reached 710 μg/Nm3, more than 11 times the safe limit prescribed by the WHO. Biomass burning in Jindal’s waste based thermal plant is a significant contributor to the air pollution load.

Referring to the Waste to Energy project for the expansion of this plant of the Jindal’s company, the report of Jindal Company’s Draft EIA report dated September 2018 makes the claim that “energy-from-waste contributes to energy security”. Given the fact that at present India has surplus power to the tune of 3,000-4,000 MW as India's total power capacity increased from 243 GW in March 2014 to 320 GW in March 2017, there is no compelling logic for the extraction of power from WTE plants.

“This “WtE” project will reduce the problem associated with the disposal of unprocessed waste as landfill and meet the objective and goal set for the country under the Swachh Bharat Mission (SBM).”

The project in question violates even the conservative Manual on MSW handling, released under Clean India Mission (Swacch Bharat) by the Ministry of Housing and Urban Development because it stands on a Green Belt under Delhi Master Plan 2021 and it is also in violation of ‘change in land use’ requirements under the DDA Act.

Amidst protests from residents and waste recycling workers, the WTE plant in Okhla, New Delhi, run by Jindal Urban Infrastructure Limited was penalised by the National Green Tribunal on February 2, 2017, saying, "For the pollution resulting from deficient functioning/operation of 'Waste to Energy Plant'". But it allowed it to operate with a caveat, saying, "In the event, the plant is found to be deficient in its operations or violates the prescribed standards of emissions, it would be liable to pay Environmental Compensation of Rs 5 Lakhs per incident, in addition to such other order or directions that may be passed by the regulatory authorities and/or this Tribunal, including closure of the plant." The fact is that the residents are exposed to ongoing emissions from this plant but this power plant continue st o function with impunity.

It is germane to recollect that Gazette notification dated 1 December, 2009 requires public hearings to be “arranged in a systematic, time-bound and transparent manner ensuring the widest possible public participation at the project site or in its close proximity, district-wise” but residents’ demand that the hearing of the proposed expansion of the Jindal’s plant be held at project site to ensure ‘widest participation’ has unfairly and irrationally been ignored.

The proposed expansion requires installation of two boilers in addition to the three already existing as part of Jindal’s waste based thermal power plant.

The hazards posed by the plant from proximity to the residential areas gets multiplied manifold because of unprecedented deviation in the form of its use of untested and unapproved Chinese boiler technology “without amendment of Environment Clearance or taking consent”. This has been noted in the verdict of National Green Tribunal dated January 16, 2017. The enormous risk also emanates from movement of hazardous ash and residues along an eight-km stretch of New Delhi’s Mathura Road (NH2) because the plant is far any landfill in violation of the environmental rules. Besides the expansion project in question, the project’s proponent has proposed new 2,500 TPD WtE project at Tehkhand within South Delhi Municipal Corporation (SDMC). Unmindful of the cumulative environmental impact of the waste incinerators across the national capital region of Delhi in the form of aggregate pollution load, separate EIAs are being prepared for different waste based projects, such motivated projects disaggregate collective awareness of the residents of the national capital region and undermines collective efforts to safeguard environmental health. Ideally, there should be a combined EIA report of all the waste based projects in the region because residents suffer from grave public health crisis due to combined air pollution load of capital region’s atmosphere. The current approach is insensitive to public health and consequences of environmental pollution because its continues to adopt fragmented and unscientific approach to outwit collective opposition of aggrieved residents of Delhi.

There is a logical compulsion to withdraw the environmental clearance given to this plant in order to save present and future generation of residents from being enveloped in a toxic gas chamber as a consequence of use of such hazardous incinerator technology adopted for generating energy from waste which admittedly has hazardous waste characteristics.

Contact Details: Gopal Krishna, ToxicsWatch Alliance (TWA), Mb: 9818089660, E-mail: krishnagreen@gmail.com, Web: www.toxicswatch.org
Note: TWA has been working on the issue of waste since 2000. It has been part of research and advocacy regarding Okhla based waste to energy plant since March 2005. It was an applicant in the National Human Righs Commission as well. 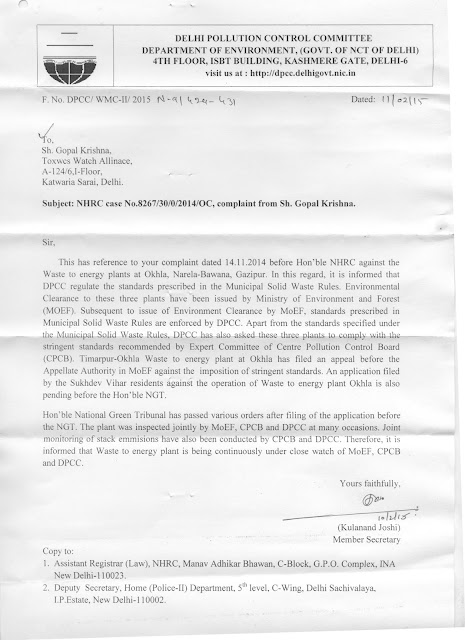 [3] UNFCCC’s CDM Executive Board’s website,  thttp://cdm.unfccc.int/Projects/Validation/DB/9JGKQMHTCBE61J51WVVT1AIH7DUW0H/view.html, accessed on 15 January, 2019
[4] Statement on Impact of Air Pollution on Health referred to in reply to Lok  Sabha  Starred  Question  No.  166  due  for reply  on14.03.2017 regarding ‘Impact of Air Pollution on Health' by Shri C.R. Patil et al, Ministry Of Environment, Forest and Climate Change, Government Of India, Lok Sabha, Starred Question No. 166
Share this article :
Labels: Jindal's Waste Incineration based power plant

Each word in above article is true and from reliable source but question is why Delhi government not doing anything about it when on one hand they make od even compulsory at times, chalan public if they burn garbage.leaves.
Also moved factories out of Delhi to avoid noxious gases and doing same sin