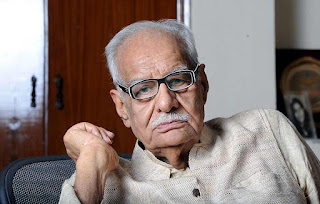 While delivering his welcome address introducing the legacy of Justice V M Tarkunde, the stalwart of civil liberties who stepped down voluntarily as judge of the Bombay High Court in 1969 to work as a lawyer in public interest, Kuldip Nayar, former member of Rajya Sabha, veteran journalist and former ambassador observed on November 23, 2012 ahead of the Sixth Justice VM Tarkunde Memorial Lecture that had Justice Tarkunde been alive he would have opposed centralized databases like Union Home Ministry’s National Population Register (NPR) and Centralized Identities Data Registry (CIDR) of Unique Identification (UID)/Aadhaar number because it is an assault on civil liberties and human rights. He underlined that the democratic space is shrinking. This project will further aggravate the situation.

Civil liberties activists who were present on occasion walked out in protest when Nandan Manohar Nilekani, the then Chairman of Unique Identification Authority of India (UIDAI) began his memorial lecture. The walk out was a protest against Nilekani being invited to deliver the lecture in memory of the stalwart of human rights and civil liberties, Justice Tarkunde. The UID project has been challenged since its inception. The activists who walked out of the lecture have repeatedly tried to engage with Nilekani at various public platforms but he has consistently declined to answer their questions or enter into any discussion with them. But till date these concerns and questions remain unanswered.

Prior to the lecture when activists approached Kuldip Nayar to persuade him to disassociate himself from this event, he opined that he will not disassociate himself with the program because of his long association with Justice Tarkunde but he will surely articulate his concerns about UID/Aadhaar and the views of  Justice Tarkunde. He endorsed the protest by the civil liberties activists. The activists had walked out the moment Nilekani began to deliver his lecture.

Notably, Kuldip Nayar had read a Statement of Concern on UID/Aadhaar issued by 17 eminent citizens which included demands like “The (UID/Aadhaar) project be halted, a feasibility study be done covering all aspects of this issue, experts be tasked with studying its constitutionality, the law on privacy be urgently worked on (this will affect matters way beyond the UID/Aadhaar project), a cost: benefit analysis be done and a public, informed debate be conducted before any such major change be brought in.”  This statement was circulated among the people who had come attend the lecture of the then Chairman of UIDAI.

The organizers rushed and tried to take back the Statement paper but several members of the audience refused to hand over the papers. As the activists walked out, the organizers termed the peaceful and silent distribution of the Statement of Concern on UID as ‘trouble’. After the program, many members of the audience who came out after hearing the lecture revealed that it was not at all convincing.

Notably, PUCL disassociated itself from the Sixth Justice VM Tarkunde Memorial Lecture program because of wrong choice of speaker. In a letter dated November 21, 2012 to the human rights community, V Suresh, National General Secretary (Elect), People’s Union for Civil liberties (PUCL) said, “We had issued a statement where we made explicit that our opposition to UDIAI has not changed nor our continuing to oppose the UID project. We had also spoken to and followed by writing to the organisers informing our stand on UIDAI, that selection of a person like Mr. Nilekani is  contradictory to the very ideals that Justice Tarkunde’s  work and persona reflected, and therefore the demand for calling off the lecture as also that we did not want to be associated with the event.”

A letter was issued after the event with the following questions:
1.   Why do we need Unique Identification (UID)-Aadhaar Number as a 16th identity proof which in fact is an identifier and not an identity proof. Hasn’t linking of cash transfer with UID made it mandatory contrary to its continued claim that it is voluntary?
In the beginning, it was said that the UID would be voluntary. Now, it is creeping into becoming mandatory, with the threat that those who don’t have a UID cannot access services of many kinds, including rations and bank accounts. How does Nilekani see the implications of this creep for civil liberties and the rights of the people?
2. Why present and future Indian citizens should be allowed to be profiled based on biometric data? Are citizens worse than prisoners? The indiscriminate collection of biometrics of prisoners is not allowed as per Identification of Prisoners Act.
3. Why have countries like UK, Australia, the Philippines rejected UID/Aadhaar like projects?
Countries such as the UK, Australia, the Philippines have rejected identity projects that closely resemble the UID/Aadhaar project because of its civil liberty implications, the prohibitive cost, the untested technology and because it will make the people subservient to the state. What is the reason for thinking that Indian citizens can bear these risks and costs?
It may noted that Supreme Court of Republic of the Philippines July 23, 1998 rejected the National ID program initiated by President Fidel V. Ramos on December 12, 1996 through “Adoption of a National Computerized Identification Reference System” in its 60 page judgment on two important constitutional grounds, viz: one, it is a usurpation of the power of Congress to legislate, and two, it impermissibly intrudes on our citizenry’s protected zone of privacy.
4. Who will be held accountable for violation of citizen’s privacy law and data protection?
The UID/Aadhaar project poses a threat to the privacy rights of citizens.
5. If violation of confidentiality promised in the Census Act cannot be done with impunity, how can census like UID/Aadhaar exercise be trusted?
6. What is the guarantee that whosoever controls Centralized Database of Indians will not become autocrat like Hosni Mubarak who handed over citizens’ database to US Government?
7. Isn’t the entire UID/Aadhaar related exercise meant to provide market for biometric and surveillance technology companies and World Bank’s partners like International Business Machines (IBM), Gemalto, Intel, Safran Group, Microsoft, and Pfizer, France and South Korea?
There is an extraordinary dependence on corporations, many of them companies with close links with foreign intelligence agencies. How are the implications of this factor being dealt with?
8. Isn’t linking of UID with voter id, land titles, National Intelligence Grid, National Population Register (NPR), National Counter Terrorism Centre (NCTC) etc an assault to rights of citizens?
The ubiquity that the UIDAI is trying to get for the UID — where it will be linked with the National Population Register, and service such set ups as the CCTNS, the NCTC, the NATGRID– where are the protections for the citizen from an invasive state?
9. Who will guarantee that the centralized database of UID, NPR will not be used for holocaust, genocide, communal and ethnic riots, targeting of minorities and political dissidents?
10. Why is technology treated as if it has no politics, or no civil liberties implications, when we know that it most certainly does have implications?
11. Did Nilekani in his role in the rank of the Cabinet Minister taken the oath on Constitution of India to abide by its provisions?

When Kuldip Nayar pondered over these questions he felt a logical compulsion to express his opposition centralized databases like UID/Aadhaar numbers database.

Civil liberties activists are opposed to UID/Aadhaar like databases because it is laying the structural basis for authoritarianism and illegitimate advances of the State at the behest of the ungovernable and unregulated foreign biometric and surveillance technology companies. The collection of biometric data supports the ideology of biological determinism with its implicit and explicit faith in the biometric technologies. There are dangers of trusting such technological advances for determining social policies and dangerous ramifications of the unfolding automatic identification regime being facilitated by it in the face of corporate media unquestionably promoting identification and surveillance technology companies.

UID/Aadhaar is rewriting and engineering the electoral ecosystem with the unconstitutional in a context where electoral finance has become source of corruption and black money in the country. This would lead to linking of UID, Election ID and Electronic Voting Machines (EVMs) which is not as innocent and as politically neutral as it has been made out to be. It is noteworthy that all EVMs have a UID numbers as well.

It is significant that on the 16th day of final hearing in UID/Aadhaar case, petitioner’s lawyer while arguing against the passage of Aadhaar Act, 2016 as Money Bill before the 5-Judge Constitution Bench of the Supreme Court cited the decision of the Court in Kuldip Nayar v. Union of India. Drawing on it he submitted that the Rajya Sabha in a bicameral legislature cannot be bypassed as it plays an important role in a federal Constitution. He further underlined the importance of Rajya Sabha and its importance in a federal structure of governance.  In Kuldip Nayar case Court observed: “Under Article 83(1) of the Constitution, the Rajya Sabha is a permanent body with members being elected for 6 year terms and 1/3rd of the members retiring every 2 years…. Rajya Sabha’s  role was undermined when Aadhaar Act, 2016 was enacted as a Money Bill despite manifest provisions in it revealing that it does not have the character of a Money Bill. The Rajya Sabha cannot be dissolved.” Amidst his opposition to UID/Aadhaar, Kuldip Nayar was deeply concerned about the constitutional role of Rajya Sabha. Now it is for the Court to ensure that Rajya Sabha’s role is restored.

The author had appeared before the Parliamentary Standing Committee on Finance that examined the Aadhaar Bill and the Parliamentary Standing Committee on Food, Consumer Affairs and Public Distribution that examined the Consumer Protection Bill. He is editor of www.toxicswatch.org and is the convener of Citizens Forum for Civil Liberties which has been working on UID/Aadhaar issue since 2010.