India at the Precipice: UID/Aadhaar keeps entire population under watch 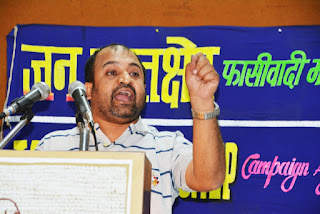 Draft Resolution read out at the Janhastakshep meeting held on 7th April 2017 at Gandhi Peace Foundation, Delhi on the topic:India at the Precipice: Resisting Fascist Onslaught on Peoples Movements
The recent assembly election results, especially in Uttar Pradesh, have cast a pall of gloom among vast sections of society. It has heightened the anxieties as to the direction in which India is headed, and rightly so, because Fascism, which still existed in the realm of possibility, now appears imminent, and the signs of this imminence are too obtrusive to ignore. The reinvigoration of cow-vigilantism that had ebbed a little in between is just one among many. Even as this meeting is taking place, the script of a vigorous attack on institutions of higher learning is unfolding by the day in order to render them servile to the Hindutva project.

Mr Modi seems to have swallowed his own words against the Aadhaar project not only to embrace the project but also drive it in a manner as to keep an entire population under watch. Such shameless opportunism is but a small thing for bigots of Hindutva brand. The grand design is to keep an entire population under watch out of fear for opposition that is bound to emerge sooner than later.

One can only speculate about the consequences for peoples’ movements and their resistance that the alchemy of Aadhaar and UAPA (Unlawful Activities Prevention Act) is likely to produce. If the case of Prof Sai Baba, Hem Mishra and others and thousands of ordinary tribal people, dalits etc. who have been incarcerated in false cases in the name of fighting extremism, along with false implication of Muslims in terror cases is anything to go by then UAPA is headed to become the new language of criminal jurisprudence vis-à-vis political movements and activists. This however is not to undermine the atrocities being committed by the Indian security forces under the cover of laws such as the AFSPA (Armed Forces Special Powers Act).

The judgment that steals the thunder is the one concerning Maruti workers, where in as many as 13 members of leadership have been handed down a life sentence for an alleged crime despite a profound lack of evidence. What is most damning is the silence and lack of any effective mobilization against the judgment on part of all major ruling class parties on this issue. This scheme of things only tells that the government’s ‘Make in India’ dream project is going to be implemented on the back of brutal repression of workers by strangulating and finishing off all labor laws.

In the recent past there has been a string of cases in which the Muslim youth who had been implicated in terror cases have been found to be innocent. However, these judgments have come when the prime of the youth of these men has already been wasted in jails. It is surprising that in none of these judgments the judicial officers found it suitable to initiate action against the guilty officers of the security agencies who falsely implicated these Muslim youth in first place. Such misdoings cannot but create a sense of further alienation among the minorities in the country.

This meeting takes a very serious view of these developments and demands:

1.       Prof Sai Baba and others who have been falsely implicated in terror cases under sections of UAPA, as also other political prisoners incarcerated likewise, should be immediately freed from jail and the case against them be withdrawn.

2.      This gathering also demands repealing of draconian laws such as the UAPA and AFSPA.

3.      Severe action as per law should be initiated against police officers responsible for falsely implicating the Muslim youth who have been recently exonerated in terror cases. The government should provide adequate compensation to these men and make arrangements for safeguarding their lives and livelihoods.

4.      The preposterous punishment meted out to the Maruti workers along with the case against them should be immediately withdrawn. The situation in the Maruti plant arose out of gross violation of labor laws by the Maruti management. Appropriate action should be taken against the management for this violation and the government should ensure that the workers are given their due by the company’s management. All the dismissed Maruti employees should be reinstated.

6.      We condemn the Aadhaar project which has emerged as the newest threat to individual freedom and civil liberties, and demand that the whole project be shelved altogether.

This gathering calls upon people at large to see and understand the imminent threat of fascism in the country and come out in large numbers to safeguard democratic rights and civil liberties in India.

Nice blog. I would like to share it with my friends. I hope you will continue your works like this .Keep up the excellent work. You have a magical talent of holding readers mind. That is something which cant be given to all by god . Keep it safe :) Check for essay writing service reviews

Nice blog. I would like to share it with my friends. I hope you will continue your works like this .Keep up the excellent work. You have a magical talent of holding readers mind. That is something which cant be given to all by god . Keep it safe :) Check for essay writing service reviews