Takes cognizance of violation of Supreme Court’s order, unapproved Chinese technology used by waste incineration based power plant
Lawlessness rules the roost in Okhla amidst public health crisis
The final hearing in the case pertaining to unapproved Chinese incineration technology based Waste-to-Energy plant of The Timarpur Okhla Waste Management Company Pvt. Ltd. (TOWMCPL), M/s Jindal Urban Infrastructure Limited (JUIL), a company of M/s Jindal Saw Group Limited at Sukhdev Vihar, Okhla has been completed and the judgement has been reserved as per National Green Tribunal (NGT)'s order dated December 23, 2016. In the meanwhile, prior to the pronouncement of the final verdict, NGT Chairperson Justice Swatanter Kumar called the parties again on January 16, 2017 for a final round of clarification. NGT asked the Jindal company whether, the plant in question is a Refuse Derived Fuel (RDF) plant? Is it one of the five Supreme Court approved pilot projects based on biomethanation technology? It inferred that the plant was neither a RDF plant for which approval was taken nor is it a Supreme Court approved pilot project. The plant is situated in the vicinity of Okhla Bird Sanctuary, public institutions and residential colonies.
The NGT's Principal Bench of Justice Kumar, Judicial Member, Mr Raghuvendra S. Rathore, Expert Member, Bikram Singh Sajwan and Expert Dr. Ajay A Deshpande passed the following order titled 'Orders of the Tribunal Supplementary matter':
"Learned Counsel appearing for the parties submit that the original project was with regard to Waste Processing Plant at Timarpur and Okhla. RDF was to be generated at Timarpur and pallets were to be brought to Okhla to be used as a fuel for generation of power. The Timarpur Project never took off. Infact, it never was established as proposed.  Bio-methanisation did not commence as wet/green waste from Azadpur was not available to the plant. It is also commonly agreed that principal challenge of the Applicant to the issue of change in technology is that the plant, to which the Environmental Clearance, consent to operate, establish was granted was to the process waste/bio-methanate/ RDF and energy which was changed without amendment of Environmental Clearance or taking consent and that it was changed to waste directly to incineration in boilers and generation of power." 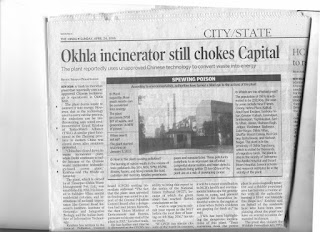 Thank you for sharing this kind of blog here. Really useful posts. I could collect more information from your post. Thank you
good