Official documents reveal how conditions of Land Allotment to New Delhi Municipal Council (NDMC), the municipal council of the city of New Delhi imposed by Delhi Development Agency (DDA) have been breached to facilitate “land grab” in the name of Jindal’s waste to energy plant in Okhla.A letter dated June 18, 1980 sent from DDA to NDMC on the subject of allotment of land at Okhla for compost plant. The letter specifically states the conditions for the allotment. 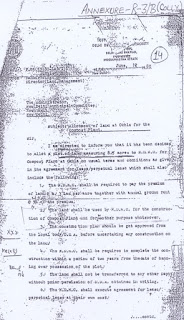 The letter reads: “The land shall be used by N.D.M.C. for the construction of compost plant and for no other purpose whatsoever.” It further reads: “The land shall not be transferred to any other Department without prior permission of DDA obtained in writing.” Another letter from DDA dated August 4, 1995 sent to N.D.M.C. reiterates: “The allotted land shall be used for the purpose of compost plant and no other purpose whatsoever”. These letters reveals that the allotment of land to NDMC was a conditional allotment subject to compliance with the stated conditions. Given the fact that NDMC has violated these conditions in an apparent exercise of facilitating “land grab” for municipal solid waste (MSW) based thermal power plant of Timarpur-Okhla Waste Management Co Pvt Ltd (TOWMCL) of M/s Jindal Urban Infrastructure Limited (JUIL), a company of M/s Jindal Saw Group Limited.  In a significant disclosure it has come to light that there are two lease deeds for a total of 13.5 acres. NDMC has violated the conditions imposed by DDA with regard to both of them.A September 2008 document of Infrastructure Leasing & Finance Services (IL&FS) Infrastructure Development Corporation Ltd focused on Timarpur-Okhla integrated municipal waste facility referred to contractual framework and mentioned about “Land License Agreement for Okhla and Timarpur land for use of land for 25 years” and Anurag Goyal, the then Director Projects, NDMC was recorded saying, “NDMC provided land as its equity to the project.”It is noteworthy that Appellate Tribunal for Electricity for New Delhi headed by Justice Surendra Kumar and Rakesh Nath recorded on 19th May, 2015 a submission about “Land leased by NDMC on nominal rate” as partof “promotional steps were taken to promote Timarpur Okhla’s Plant” as part of its Judgment in Appeal Nos. 251 of 2013 and 325 of 2013.  The company Timarpur-Okhla Waste Management Company Ltd (TOWMCL) Old NDMC Compost Plant, Behind Central Road Research Institute (CRRI), Mathura Road, New Delhi was appellant.The documents from 1980, 1995, 2008 and 2015 create a compelling logic for DDA to cancel the land allotment to NDMC and ensure that the land from TOWMCL is taken back and given to DDA.Had DDA permitted changes in land use at Okhla, it would have published a Gazette notification as it routinely does in such cases.It is high time NGT took cognizance of the submissions and conditions by DDA and ordered closure of the Dioxins emitting power plant located in a residential and ecologically sensitive area.For Details: Gopal Krishna, ToxicsWatch Alliance (TWA), Mb: 08227816731, 09818089660, E-mail:1715krishna @gmail.com, Web: www.toxicswatch.org
Share this article :
Labels: Central Govt, Delhi Govt, environmental lawlessness, Land grab in Okhla