September 16, 2016: Responding to letters of Citizens Forum for Civil Liberties (CFCL) to Chief Justice of India, Union Minister of Human Resource Development and Secretary, University Grants Commission (UGC) and contempt applications in the Supreme Court, UGC has “clarified that any student who have applied or wishing to apply for scholarship/fellowship shall not be denied benefit thereof due to non availability of Aadhaar No./Card.”  The revised PUBLIC  NOTICE dated September 14, 2016 is available  at http://www.ugc.ac.in/pdfnews/7057426_UGC-Clarification-reg-AADHAAR-14.09.2016.pdf

CFCL had sent the attached letters on August 26, 2016, July 12, 2016 and 2nd July, 2016 drawing their attention towards order dated 15.10.2015 passed by the Supreme Court of India in the ‘UID/Aadhaar’ matter, i.e. Justice (retd.) K.S. Puttuswamy v. UOI & Ors., WP (C) No. 494/2012 and related petitions. The order is attached for your perusal and consideration. The circular of UGC which is in manifest violation of Hon’ble Court’s order is available at http://www.ugc.ac.in/pdfnews/4792000_Aadhaar-.pdf. The CFCL letters to the concerned authorities are attached.

AADHAAR/ UID scheme is presently under challenge before the Supreme Court. After hearing the parties has passed a series of interim orders starting the 23rd September 2013 and the last of which was passed on October 15, 2015 inter alia, states as follows.
4. We impress upon the Union of India that it shall strictly follow all the earlier orders passed by this Court commencing from 23.09.2013.
5. We will also make it clear that the Aadhaar card Scheme is purely voluntary and it cannot be made mandatory till the matter is finally decided by this Court one way or the other.
In the related case the Hon'ble Supreme Court in SLP (CRl) 2524/2014 Unique Identification Authority of India Vs CBI passed an order dated 24.3.2014 which reads as follows: “More so, no person shall be deprived of any service for want of Aadhaar number in case he/she is otherwise eligible/entitled. All the authorities are directed to modify their forms/circulars/likes so as to not compulsorily require the Aadhaar number in order to meet the requirement of the interim order passed by this Court forthwith. Tag and list the matter with main mater i.e. WP (C) No. 494/2012.”

All the orders of Supreme Court are still in force as per Court's order of 15th October, 2015 and they will remain in force till the time court itself does not waive them. The Court’s order makes it clear that UID/ aadhaar remains voluntary.

Therefore, no one can be asked to produce UID/ aadhaar for disbursement of all Government subsidies/Scholarships/Fellowships which are to be disbursed directly into the beneficiaries' account.

In view of the above mentioned facts, UGC and central government is under a legal compulsion to revise its illegitimate and illegal orders fearing Court’s action in the face of violation of its unambiguous order.

It is noteworthy that legality of UID/Aadhaar has already been questioned by Punjab & Haryana High Court.

In a setback to efforts to bulldoze UID/Aadhaar and related schemes, following the direction issued to the Union of India and Union Territory of Chandigarh by Punjab and Haryana High Court in the matter of Civil Writ Petition 569 of 2013 filed in the High Court against Union of India and others, the Executive Order for making Unique Identification (UID)/Aadhaar mandatory was withdrawn. In its order the Punjab and Haryana High Court bench of Justice A K Sikri, Chief Justice and Justice Rakesh Kumar Jain dated February 19, 2013 had noted that the petition “raises a pure question of law.” Since the Executive Order was withdrawn, the case too was disposed of March 2, 2013 with a two page order.

The Order observes, “In this writ petition filed as PIL, the petitioner has challenged the vires of notification issued by Union of India for making it compulsory to have UID Cards." It is further observed in the order that “Second issue raised in this petition is that vide order dated 5.12.2012, respondent No.3 i.e. Deputy Commissioner, U.T., Chandigarh has given directions to the Branch In charge Registration-cum-Accountant, office of Registering & Licensing Authority, Chandigarh not to accept any application for registration of vehicle and grant of learner/regular driving licence without UID card.”

It is noteworthy that Secretary Government of India, Ministry of Communication and Information Technology wrote a letter to the Secretary, Department of Defence Production asking him to introduce Aadhaar enabled Biometric Attendance System in the department of defence production. The system would enable an employee with an Aadhaar number to register his/her attendance (arrival/ departure) in the office through biometric authentication. It also says that a web based application software system will enable online recording of attendance and that the dash board relating to real time attendance and related statistics, can be viewed by everyone. It is clear that this transforms a “voluntary” project into a mandatory project.

Meanwhile, Ajay Bhushan Pandey, Chief Executive Officer, UIDAI has claimed that “At least from the UIDAI side, we have not said it shall be mandatory.” If it indeed true that UID/Aadhaar is not being made mandatory by UIDAI then MeitY should withdraw its letter to Secretary Department of Defence Production and other departments, agencies and State Governments.  If it does not do so with immediate effect else it will demonstrate that it is fibbing by articulating equivocal and questionable statements.

Citizens Forum for Civil Liberties (CFCL) had sent a legal notice to the Central Government. It responded stating, “Aadhaar is being used for Biometric Attendance System and this does not form part of Defence application”.

Government will have us believe that there is no difference between “age-old attendance register” and UID/Aadhaar enabled Biometric Attendance System. It is eminently clear that UIDAI is sharing half-truths with State Governments, media and the citizens.

In order to comprehend the sophistry involved in such averments, it is germane to recall the intervention of National Human Rights Commission (NHRC) in the case wherein Indian students in USA were made to wear radio collars. NHRC ensured that the government acted to ensure that the human rights of students are protected. It is germane to note that radio collar is based on biometric data like voice print. If making Indian students wear biometric radio collar constitutes an act which Government of India admitted as an act of violation of human rights, indiscriminate biometric profiling is also an act of violation of human rights. As per Section 2 (G) of Aadhaar Act 2016, “biometric information” means photograph, fingerprint, Iris scan, or any other biological attributes specified by regulations. Thus, it clearly includes biological attributes like voice print and DNA.

Coincidentally, NHRC’s views on National Identification Authority of India Bill, 2010 (Aadhaar Bill, 2010) helped Parliamentary Standing Committee on Finance in its recommendation to trash the Bill and the biometric data based UID/Aadhaar programme.

The fact is that the application of biometric UID/Aadhaar was restricted to ‘civilian application’ and was not meant for defence application. Central Government’s Biometrics Standards Committee had categorically stated that UID/aadhaar’s is meant only for “civilian application” but the order on aadhaar enabled biometric attendance system has been extended to defence employees as well.

It is evident that Central Government has illegitimately and illegally been trying to make UID/Aadhaar Number mandatory by making it structurally irreversible outwitting Court’s directions although the very first promise which legally questionable UIDAI made in its UID/Aadhaar Enrolment Form is/was that it is “free and voluntary”. Government’s notification of September 12, 2016 also underlines it. The fact is that it is neither free nor voluntary. It is not free because the foreign companies involved are admittedly charging Rs 2.75 per enrolment. Central, State Governments and other agencies have been illegally seeding UID/Aadhaar in their IT systems to make it structurally mandatory. It is only Court’s order that has kept UID/Aadhaar “voluntary.” Earlier government had tried unsuccessfully to make even disbursal of judges’ salary conditional on UID/Aadhaar.

Such attempts to make UID/Aadhaar have emerged as an act of bullying by the government agencies and turning citizens into subjects by making right to have inalienable, natural, fundamental and constitutional rights conditional on biometric identification.

The revision of the UGC’s order by central government ahead of the upcoming hearing in the Supreme Court vindicates the position of CFCL and eminent citizens who have issued Statement of Concern and Public Statement seeking halting of UID/Aadhaar project. This revision reveals that the central government, state governments and other agencies who have been attempting to make it mandatory have been manifestly been wrong.
Although Constitution Benches have started sitting since January 15, 2016 after your intervention, birth of Constitution Bench UID/Aadhaar Number case continues to experience labour pains. Court’s website as of September 16, 2016 states that UID/Aadhaar case is a “Five Judges Matter” but among the 10 Constitution Bench cases listed for hearing, it finds no mention despite the fact that a five judge bench headed by Chief Justice of India wrote, "Since there is some urgency in the matter, we request the learned Chief Justice of India to constitute a Bench for final hearing of these matters at the earliest". Unless these words are accorded due respect and attention, the meaning of the words of Court will lose their gravity.
The role of Registry of the Supreme Court in ensuring compliance of the order of Chief Justice headed five Judge Bench is quite crucial and relevant in this regard.
In view of the “urgency” admitted and recorded by Court’s Bench of five judge headed by Chief Justice of India to the biometric UID/Aadhaar Number case, it appears inappropriate that even as the apex Court is to determine the legal status of UID/Aadhaar, Indian residents are being coerced to accept 12 Digit Biometric UID/Aadhaar Number as a fait accompli.
Following the revision order of central government, there is a logical compulsion for withdrawing the letter and all consequential letters by which UID is made applicable to defence application i.e. Department of Defence Production in the interest of supreme national security. 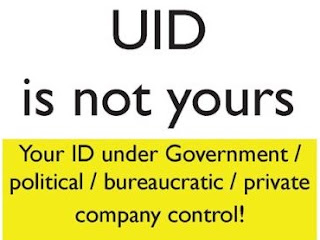 Central Government has kept State Governments in a dark about its transnational linkages and implications the latter are yet to realize that UID/Aadhaar project is a grave threat to federalism as well.
Under the tremendous influence from unregulated and ungovernable technology companies, Central Government and State Governments have failed to safeguard national security and citizens’ inalienable rights.
It is possible that such civilian and non-civilian applications are being bulldozed by some commercial entities in order to store and read biometric and DNA script of Indian population in the aftermath of the sequencing of
Human Genome for epigenetics, medicine, big data, social control, inheritance, eugenics and genetic determinism.
For Details: Gopal Krishna, Citizens Forum for Civil Liberties (CFCL)*, Mb: 09818089660, 08227816731, E-mail-1715krishna@gmail.com

*Citizens Forum for Civil Liberties (CFCL) has been working on the issue of Unique Identification (UID) Number branded as “Aadhaar” since 2010. CFCL appeared as an expert to give testimony in front of Parliamentary Standing Committee on Finance which examined the National Identification Authority of India Bill, 2010 (Aadhaar Bill, 2010). A series of articles on the subject are available at http://www.moneylife.in/author/gopal-krishna.html
Share this article :
Labels: Big Data, Surveillance

Great post sir!
Finally found my aadhar status by name on your website after looking for so long.