skip to main | skip to sidebar
Home » ASBESTOS FREE INDIA , Hazardous Industries » After ban on liquor, Bihar all set to join developed countries by making the State free of asbestos based factories

After ban on liquor, Bihar all set to join developed countries by making the State free of asbestos based factories

After more than five years of struggle, Bihar pollution control board has cancelled permission to all the 6-7 asbestos plants including the ones in Bhojpur

Patna/New Delhi: With Bihar State Pollution Control Board (BSPCB) cancelling the No Objection Certificate given to the asbestos factory units of Tamil Nadu based Nibhi Industries Pvt Ltd and Ramco Industries, Bihar is all set to be free of asbestos based factories like more than 50 countries that have banned production, use, manufacture and trade of the hazardous mineral fiber, Asbestos. These countries are: Nepal, Algeria, Czech Republic, Iceland, Malta, Seychelles, Argentina, Denmark, Ireland, Mozambique, Slovakia, Australia, Egypt, Israel, Netherlands, Slovenia, Austria, Estonia, Italy, New Caledonia, South Africa, Bahrain, Finland, Japan, Norway, Spain, Belgium, France, Jordan, Oman, Sweden, Brunei, Gabon, South Korea, Poland, Switzerland, Bulgaria, Germany, Kuwait, Portugal, Turkey, Chile, Greece, Latvia, Qatar, United Kingdom, Croatia, Honduras, Lithuania, Romania, Uruguay, Cyprus, Hungary, Luxembourg and Saudi Arabia. All the 27 countries of European Union have banned it. There is a logical compulsion based on scientific and medical evidence including resolutions of WHO and ILO to ban asbestos of all kinds including white asbestos to save life and health of Indians.
WHO’s views are available at: http://www.who.int/ipcs/assessment/public_health/asbestos/en/
While the successful protests were underway in Muzaffarpur and Vaishali three asbestos plants got set up in Bhojpur district because of localization of media. The Bhojpur media was not reporting on the successful anti-asbestos struggle in other districts. 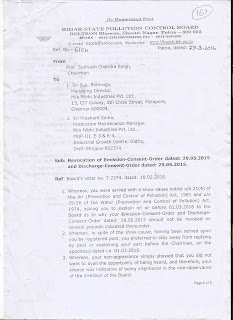 Due to incessant efforts of Ban Asbestos Network of India (BANI) and ToxicsWatch Alliance (TWA) along with Parwaywarn Bachao Jeewan Bachao Sangharsh Samiti and Parywawarn Swasthya Suraksha Samiti pointing out non-compliance with environmental laws, BSPCB has revoked its emission-consent order and discharge consent order which was valid till 31st March, 2018. Chairman, BSPCB has ordered, the company in question, Tamil Nadu based Nibhi Industries Pvt Ltd. to “close your industrial unit with immediate effect, failing which complaints shall be filed u/ss. 44 of the Water (Prevention and Control of Pollution) Act, 1974 and 37 of the Air (Prevention and Control of Pollution) Act, 1981.”   This land allotment was considered to be part of the scam that led to an inquiry into allotments by Bihar Industrial Area Development Authority (BIADA).
In Bhojpur's Giddha village in Koilwar block, the 100,000 MT Capacity Asbestos Fibre Cement Corrugated Sheet, Flat Sheet, Accessories and Light Weight Fly Ash Block Plant acquired 15 acres. The plant site is located adjacent to Ara-Koilwar road.
When it was repeatedly pointed out the violations of the general and specific conditions given the environmental clearance and NOC by Ramco Industries, BSPCB’s Chairman took its cognizance. He has issued an order saying, “I therefore, have no option but to treat this unit as a non-compliant industry and am not inclined to renew the Emission-Consent-Order and Discharge-Consent-Order for further period beyond 31.3.2016. The applications for Emission-Consent-Order and Discharge-Consent-Order dated 12.2.2016 are, accordingly, refused.” 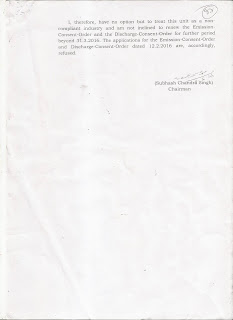 Central government’s apathy towards victims of primary and secondary exposure of killer asbestos mineral fibers shows that in the conflict between naked lust for profit and public health, it is choosing to be complicit with the former. The legacy of callousness towards victims of asbestos related diseases refuses to learn lessons from the epidemic of such diseases world over due to past usage of asbestos. Asbestos related diseases have a long incubation period ranging from 5-50 years.

Union Environment Ministry’s Vision Statement on Environment and Human Health reads, "Alternatives to asbestos may be used to the extent possible and use of asbestos may be phased out" but the Experts Appraisal Committee of this very ministry continues to give environmental clearance to such hazardous industries. This is notwithstanding the fact that "The Government of India is considering the ban on use of chrysotile asbestos in India to protect workers and the general population against primary and secondary exposure," as announced in a concept paper by the Ministry of Labour. Both these documents are available on central government’s website but struggle to make Indians safe from deadly exposure of asbestos fibers continues in the face of misinformation campaign of the killer industry.
After becoming liquor free, now that Bihar is all set to be free of asbestos based factories, one is hopeful that health being a State subject, Bihar will take a lead by banning asbestos procurement and use in the state to pave the way for other state governments and the central government to follow.
Responding to anti-asbestos struggle Bihar Chief Minister had claimed that he will puncture this industry but the task of decontaminating asbestos laden factory sites, building, preparing a register of victims of asbestos related diseases, creating an inventory of asbestos based products and announcing a compensation fund for victims of fatal diseases remains to be undertaken. It has reliably been learnt that the preliminary work of identifying victims have begun.
Ban Asbestos Network of India (BANI) and ToxicsWatch Alliance (TWA) have been pursuing the campaign for a nation-wide for more than a decade to save present and future generation from asbestos related diseases. This effort has received the support of left and some socialist parties.