Violation of Environmental Clearance conditions by asbestos based factory at Giddha, Koilwar, Bhojpur

This is to draw your urgent attention towards the illegal operation of an asbestos factory in Giddha, Koilwar, Bhojpur that has been reported in Aaj newspaper dated June 3, 2016 at page 2. The news clipping is attached.

I submit that the Environmental Clearance [F. No. J-11011/312/2009- IA II (I)] for Proposal No : IA/BR/IND/4148/2010 granted to Nibhi Industries Pvt. Ltd by the Ministry of Environment and Forests under the provisions of EIA Notification dated 14th September, 2006 is subject to strict compliance of the following specific and general conditions. The Date of apply for TOR  is 20th January, 2010, Date of TOR Granted is 7th July, 2009 and the Date of EC Granted is 27th February, 2010.
The specific conditions given required “Regular medical examination of the workers and health monitoring of all the employees shall be carried out and if cases of asbestosis are detected, necessary compensation shall be arranged under the existing laws. A competent occupational health physician shall be appointed to carry out medical surveillance. Occupational health of all the workers shall be monitored for lung function test, chest x-ray, sputum for acid-fast-bacilli (AFC) and asbestos body (AB), urine for sugar and albumen, blot tests for TLC, DLC, ESR, Hb and records maintained for at least 40 years from the beginning of the employment or 15 years after the retirement or cessation of employment whichever is later. Occupational Health Surveillance shall be carried out as per the directives of the Hon’ble Supreme Court.” The copy of the Environmental Clearance is attached. The company in question has not complied with the “directives of the Hon’ble Supreme Court” as stated in the specific conditions.
I submit that in contempt of Hon’ble Supreme Court's order dated January 27, 1995, the Nibhi Industries has not been maintaining and maintaining the health record of every worker, nor has it been conducting Membrane Filter test to detect asbestos fibre. It has not been insuring health coverage to every worker. It is reliably learnt that the company did not have qualified occupational health doctors to undertake these tasks. This order was reiterated on 21st January, 2011 by the Court. It has been referred to by Hon’ble Patna High Court as well in Civil Writ Jurisdiction Case No.9064 of 2013 and related cases.

I submit that the specific conditions asked the company “To educate the workers, all the work places where asbestos dust may cause a hazard shall be clearly indicated as a dust exposure area through the use of display signs which identifies the hazard and the associated health effects.” This condition too has been violated.

I submit that the specific conditions reads: “The company shall provide housing for construction labour within the site with all necessary infrastructure and facilities such as fuel for cooking, mobile toilets, mobile STP, safe drinking water, medical health care, crèche etc. The housing may be in the form of temporary structures to be removed after the completion of the project.” This condition has been violated as well. 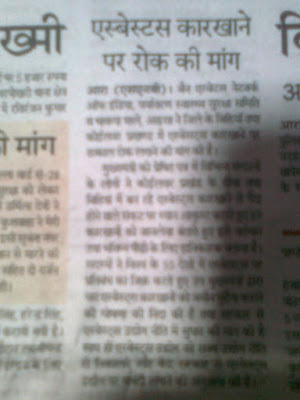 I submit that one worker was crushed to death in this factory in June 2013. The EAC ought to seek report about it from the district administration. This factory at Giddha, Koilwar, Bhojpur, Bihar is in proximity of human habitation and is exactly behind Trident BEd College. This plant also violates the environmental and industrial siting guidelines of Bihar State Pollution Control Board. It may be noted that Paryawaran Bachao Jeewan Bachao Sangharsh Morcha, Paryawaran Swasthya Suraksha Samiti and Ban Asbestos Network of India (BANI) have been raising the issue of hazards from such hazardous factories in the interest of public health. It may be noted that written submissions have been submitted to District Collector seeking removal of the plant.

I submit that although environmental clearance given by Experts Appraisal Committee-Industrial Projects-I, Union Ministry of Environment & Forests and No Objection Certificate given by Bihar State Pollution Control Board is not transferrable, Nibhi company had transferred it to Utkal Asbestos Limited (UAL) for operating the plant. This is clearly in violation of established rules.

I submit that the villagers’ living in the vicinity of this hazardous factory face threat of lung related diseases contracted exposure from asbestos fibers that cause incurable diseases. This happens because safe and controlled use of white chrysotile asbestos like its other varieties is impossible which has led to more than 50 countries banning its use.

I submit that the district administration may be asked to submit the health records of all the workers who are working in this factory. The company should be asked for a list of workers employed in the factory, their health records and the qualification of the doctor assigned to undertake their health checkup. It is important to order a health survey of the villagers who live in the vicinity of this hazardous factory. The educational institutions like teachers’ training institutes also need to be surveyed in this regard. This is necessary because both World Health Organisation (WHO) and International Labour Organisation (ILO) have recommended total elimination of its mining, manufacturing and use. WHO document is attached. It may be noted that mining of asbestos is technically banned in India but the asbestos based factories procure raw asbestos mineral fiber from countries like Russia. It is one of the pernicious and residual legacies of the old era.

I submit that the 27th January, 1995 and 21st January, 2011 orders of Hon’ble Supreme Court make it clear that State Governments and Government of India have to comply with fresh ILO resolution of June 2006 on asbestos. ILO resolution is available at
http://www.ilo.org/public/english/standards/relm/ilc/ilc95/pdf/pr-20.pdf
The issue in question is concerned the human rights of the present and future generations. In fact in the Hon’ble Supreme Court's judgment of January 27, 1995 in Writ Petition (Civil) No. 206 of 1986 [CERC Vs Union of India] that dealt with asbestos exposure, right to health was declared as part of fundamental right to life. As per Court's judgment of 27th January, 1995 in Writ Petition (Civil) No. 206 of 1986 which was reiterated on 21st January, 2011, the health records of workers have to be maintained for 40 years and for 15 years after the retirement. The judgment also stipulates compensation for such workers who suffer from asbestos related diseases.

I also wish to draw your attention towards Hon'ble Patna High Court’s observation dated August 19, 2013 in its order in Civil Writ Jurisdiction Case No.9064 of 2013 saying, “...In the circumstances, this Court is really surprised with the stand of the State Board that the norms have been relaxed for the two other asbestos manufacturing units in operation from before, only on the ground that they are running in the respective industrial areas." These two units are the ones based in Giddha, Koilwar, Bhojpur and Bihiya, Bhojpur. It is a commentary on the inconsistency of the Bihar State Pollution Control Board (BSPCB).

In the light of the observation of the Hon’ble High Court it is abundantly that Bihar State Pollution Control Board (BSPCB) is adopting double standards in the matter of cancellation of Consent to Establish-cum- No Objection Certificate (NOC) given to asbestos companies in Bhojpur and Vaishali. The two companies -namely, Tamil Nadu based Ramco Industries and Nibhi Industries -mentioned by the Court are located in Bihiya and Giddha, Koilwar of Bhojpur district. BSPCB has cancelled the NOC of West Bengal based Utkal Asbestos Limited (UAL)'s proposed asbestos based plant in Vaishali for violating environmental and industrial siting guidelines of BSPCB.

I submit that through a letter dated December 26, 2013, BSPCB has refused to extend the Consent to Establish (NOC) given to West Bengal based Utkal Asbestos Limited (UAL)'s proposed asbestos based plant in Vaishali but it has remained silent about the asbestos plants in Bhojpur.

I submit that BSPCB’s battery limit of "a distance of minimum 500 meters from the National/State Highway, Railway line, river and human habitation" outlaw the proposal of a asbestos company, the same should be applied to asbestos based toxic factories in Bhojpur.

I submit that the General Conditions given in the Environmental Clearance certificate states: “The project authorities must strictly adhere to the stipulations made by the Bihar Pollution Control Board (BPCB) and the State Government.” The stipulation regarding battery limit has been violated.

I submit that communities in villages around the hazardous industrial unit in Giddha cannot be expected to become superior risk bearers unlike villagers of Muzaffarpur and Vaishali where similar plants have been stopped.

I submit that the General Conditions given in the Environmental Clearance certificate states: “All the measures regarding occupational health surveillance of the workers shall be undertaken and regular medical examination of all the employees shall be ensured as per the Factories Act and records maintained.” The factory has not followed this condition.

In view of the above facts underlining the violation of the conditions of EC, there is a compelling logic for revoking the environmental conditions granted to this factory. This is required for providing relief to the workers of the asbestos based factory in question and save the villagers of Koilwar block in Bhojpur, Bihar from such hazardous plants. The company must be asked to undertake decontamination of the site and compensation for exposing the villagers of Giddha to asbestos fibers in the interest of present and future generations.