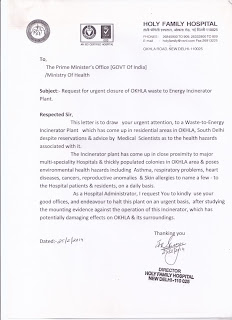 This is to bring to your notice the massive construction underway at the incineration technology based Waste-to-Energy plant of The Timarpur Waste Management Company Pvt. Ltd. (TWMCPL), M/s Jindal Urban Infrastructure Limited (JUIL), a company of M/s Jindal Saw Group Limited at Sukhdev Vihar, Okhla in the vicinity of Hazi colony, Gaffar Manzil and several residential and sensitive institutional entities besides Okhla Bird Sanctuary. The residents of Okhla region are quite perturbed and alarmed about it. A concrete mix plant has been erected to construct an additional structure. These additional and modification activities are in violation of the conditions laid down in the environmental clearance letter.

I submit that this construction is underway without any fresh Environment Impact Assessment (EIA) report and Public Hearing giving details of the additional activity. This activity is in addition to deviation in technology for which environmental clearance was obtained. It has resulted in severe pollution to the environment. The fact is that contrary to the Environment Impact Assessment (EIA) report, bio-methanation plant and Refuse Derived Fuel (RDF) units do not exist.  This plant violates siting norms for polluting industries, being barely 150 meters from long-established residential areas, posing a threat to life of residents.

I submit that no residential locality in its sanity can give consent to allow some 2,000 MT of unsegregated municipal waste to be incinerated daily in their locality. They cannot be expected to be superior bearers of risk. The EAC cannot turn a blind eye to serious health hazard to tens of thousands of people living and working in this ecologically-sensitive area. It is noteworthy that two major hospitals in the area have complained to the Prime Minister's office about the hazards to patients.

The claims made in the Compliance Report for the Period 01.10.2012 to 31.03.2013 for the Project Integrated Municipal Solid Waste Processing Complex (waste to energy plant) at Okhla by M/s Timarpur-Okhla Waste Management Co. Pvt. Ltd with regard to the Specific Conditions and General Conditions laid down in the Environment Clearance Letter No. : D/SD/DG dated 23-1/2006-IA-III Dated 21.03.2007 and 09.05. 2007 are factually incorrect and misleading.
Specific Condition reads: No Objection Certificate from the Delhi pollution Control committee should be obtained before initiating the project.

Status of Compliance: Delhi Pollution Control Committee has issued show cause notice to the project proponent and denied it authorisation or consent to operate during the last monitoring period.

Specific Conditions reads:  “To minimize odour and aestheics, it should be ensured that waste will be directly unloaded into specifically designed pits. The air contained in the complex should be suitable treated with wet scrubbing method before lettering out in the atmosphere.”

Status of Compliance:  The entire Okhla region surrounding the waste to energy plant is contaminated with toxic ash emanating from the plant. The air pollutants from this plant contribute to the overall air pollution in Delhi that is having adverse health impact and reducing life span of the individuals.
General Condition reads: In case of diversion or alteration in the project including the implementing agency, fresh references should be made to Ministry for modification in the clearances conditions or imposition of new one for ensuring environmental protection. The project proponents should be responsible for implementing the suggested safeguard
measures.

Status of Compliance:  Although there has been admitted “diversion or alteration in the project including the implementing agency” especially with regard to technology, no fresh references has been made to Ministry for modification in the clearances conditions or imposition of new one for ensuring environmental protection.

This violation of Environment Impact Assessment Notification, 2006 is part of ongoing violations by this project proponent from the very outset. This fact has been admitted by the Union Minister of Environment & Forests in his letter to the Chief Minister of Delhi.

In view of the above facts and violations on numerous counts, I wish to request you to withdraw the environmental clearance given to this plant because you have a legal and moral obligation to save present and future generation of residents from being enveloped in a toxic gas chamber as a consequence of use of such hazardous incinerator technology adopted for generating energy from waste which admittedly has hazardous waste characteristics.

I will be happy to share more information and relevant documents since March 2005 till date.

Annexures:
1.      The 31 page report of the Union Environment Ministry constituted Technical Experts Evaluation Committee of Central Pollution Control Board (CPCB) on the Okhla Waste to Energy Incinerator Plant was communicated on March 22, 2012.
2.      Proceedings of Public Hearing held on 20.01.2007
3.      Letter from Holy Family Hospital
4.      MS Word version of the letter is attached.

such very great information. Thank you for your sites for proving such kinds of good information. NATA Application Form 2017

You can book call girls in Guwahati or escorts in Guwahati for incall facility or outcall
Facility as and when required. To book Guwahati call girls you
can visit the following links
Call Girl in Guwahati
Guwahati Call Girl