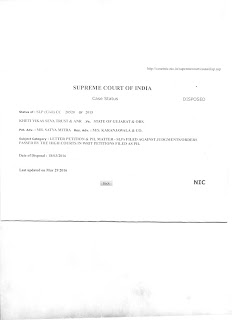 A Special Leave Petition (Civil) 20520 of 2015 was filed in the Supreme Court in November 2015 in the matter of a judgment and order dated 17th April, 2015 of the Gujarat High Court in WP (PIL) No. 12 of 2011 wherein High Court had dismissed the petition filed by the Kheti Vikas Seva Trust. The 73 page long High Court’s order was passed by Justice Vijay Manohar Sahai and Justice R.P.Dholaria.

The High Court’s order records, “the Committee has recommended following measures for project clearance conditions and post clearance monitoring:
1. The current regulatory system is not able to handle the complexity and size of projects of this nature. There is an urgent need to strengthen the monitoring abilities and to bring in public oversight.
2. The monitoring and auditing of such a large project is only possible, if the clearance conditions are specific and detailed, geo-referenced and there is a lands at imagery analysis to benchmark 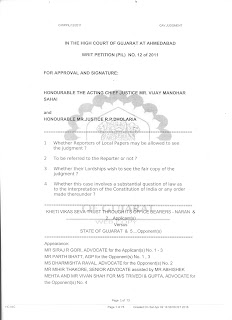 the project area, pre-construction. Without these benchmarks, it is not possible, to ascertain the extent and scale of the violations committed during construction and operation phase.
3. More, importantly, a system should be developed so that all monitoring data is widely accessible by local communities to use and comprehend in terms of impacts.” This committee was set up by Union Ministry of Environment and Forests “to look into the complaints regarding severe impact upon environment safety and integrity committed by M/s.Adani Port and SEZ Ltd.”

It appears strange that although the High Court recorded these recommendations of the independent committee that expressed distress at the cumulative damage caused by Adani’s projects, still the petition was dismissed.

The High Court's order conclusively states "the respondent-company has been granted phase-wise Environmental Clearance beginning the year-1995 by the Ministry of Environment and Forests (MOEF), Government of India, New Delhi for their project and the State Government has allotted various parcels of lands to the respondent-company and they have developed the area pursuant to such Environmental Clearance and allotment of lands. The committee constituted by the Ministry of Environment and Forests (MoEF), New Delhi to look into the complaints regarding severe impact upon environment safety and integrity committed by M/s.Adani Port and SEZ Ltd has submitted its detailed report with recommendation to the Government of India and the same is under consideration of the competent authorities. In view of the aforesaid observations made by the committee, we are convinced that no directions is required to be issued in the matter and the complaint and grievance raised by the petitioner appears to be misplaced." 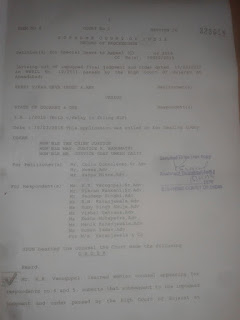 The petition was filed against State of Gujarat, District Collector, Kutch, Mundra Port and SEZ, Adani Power Limited and others  because of the continuous and wilful activities of the Respondent Companies in the Mundra coastal region which includes Coastal Regulation Zone area and “Reserved Forests” of mangrove trees are leading to large scale ecological imbalance in the area including destruction of mangrove forests, blocking and drying of creeks, salinity ingress into ground water, fly ash mismanagement and consequent hazards, loss of agricultural yield and significant health risks in the surrounding population.

It was filed because the SEZ and the 4 ports and the thermal power station of Adani company were granted conditional environmental clearances whereas these conditions were never met thereby leading to gross ecological imbalance in the reserved forests of  mangroves and in the Coastal Regulation Zone.

It was filed because these conditional environmental clearances were revocable on the conditions not being met by the companies in question. The activities of the Respondent Companies include operating from the thermal power plant built on one arm of the Siracha river, hence, blocking the flow of the river, dredging and reclamation of coastal and forest land by use of various heavy machinery and manpower, use of Kachcha Channel and Kachcha Pond for drawing sea water, thereby, causing excessive salinity ingress into the ground water, disposal of fly ash (a residue produced from thermal power plant) in the open area and on village roads, thus, leading to fly ash mismanagement and related hazards, and bunding and filling of creeks for land reclamation. 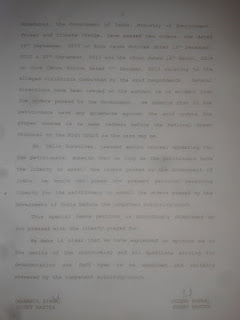 Nice Post. This is fabulous content for a blogger who also writes invented story, poetry, etc. I’ve had a feeling in my destroy by fire that the two worlds of blogging and all other writing were more custom essay writing service connected than they appeared. This post is spot on in enlightening how some ethics affect to any writing position.

I love the information you provide here and can’t wait to take a look when I get home. I’m surprised at how fast your blog loaded on my cell phone. I’m not even using WIFI, just 3G. Anyways, awesome blog!
industrial safety courses in chennai

Great Article. Thank you for sharing! Really an awesome post for every one.
Project Centers in Chennai

Final Year Project Domains for IT

An advantage of land clearing is it helps with the healthy growth of plants and trees. When a plot is crowded with vegetation, the likelihood of plants surviving on it decreases. Clearing land provides more room for them to grow and gives the plants better access to water, nutrients, and sunlight.Speedy Waste Clearance Edinburgh