India-Japan Joint Declaration disregards public health concerns from nuclear commerce and nuclearisation
Joint Declaration should have called for scrapping of WHO-IAEA agreement that compromises nuclear & radiological safety
Disregarding lessons from preventable Fukushima nuclear disaster, a profoundly man-made disaster, the Indo-Japan joint declaration titled Japan and India Vision 2025 Special Strategic and Global Partnership dated December 12th, 2015 welcomed “the agreement reached between the two Governments on the Agreement between the Government of Japan and the Government of the Republic of India for Cooperation in the Peaceful Uses of Nuclear Energy, and confirmed that this Agreement will be signed after the technical details are finalised, including those related to the necessary internal procedures.” 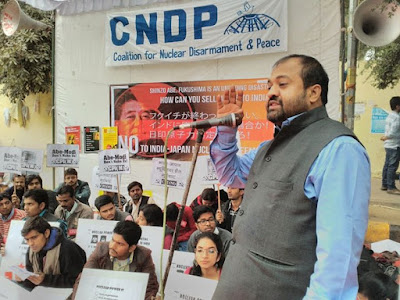 Having decided to pursue the nuclear path, the Prime Ministers of India and Japan “expressed concern over North Korea's continued development of its nuclear weapons and ballistic missile programmes, including its uranium enrichment activities”. Such averments underline double standards being practiced at the behest of nuclear companies.
The pious expression seeking “the denuclearisation of the Korean Peninsula” under relevant United Nations Security Council resolutions appears hollow because unless there is universal denuclearization how can denuclearization of Korean Peninsula alone can serve the ultimate purpose of global disarmament.
“The two Prime Ministers, on the occasion of the 70th year since the atomic bombings of Hiroshima and Nagasaki, reaffirmed their shared commitment to the total elimination of nuclear weapons. They called for an immediate commencement and early conclusion of negotiations on a non-discriminatory, multilateral and internationally and effectively verifiable Fissile Material Cut-off Treaty (FMCT) on the basis of Shannon Mandate. In this context, Prime Minister Abe stressed the importance of early entry into force of the Comprehensive Nuclear Test Ban Treaty (CTBT) which should lead to nuclear disarmament. They also supported the strengthening of international cooperation to address the challenges of nuclear proliferation and nuclear terrorism.”  It is noteworthy that the two Prime Ministers chose not to make any mention of anniversary of the Chernobyl and Fukushima nuclear disaster.
“The two Prime Ministers recognised the importance of effective national export control systems. Japan welcomed India's intensified engagement with export control regimes ．The two Prime Ministers affirmed their commitment to work together for India to become a full member in the four international export control regimes: Nuclear Suppliers Group, Missile Technology Control Regime, Wassenaar Arrangement and Australia Group, with the aim of strengthening the international non- proliferation efforts.”
But they maintained studied silence of about the conflict of interest ridden regime of Vienna based International Atomic Energy Agency (IAEA), which is acting both as a regulator and promoter of nuclear commerce.
Indo-Japan joint declaration for collaboration in the areas like civil nuclear energy, solar power generation, rare earths and advanced materials to work for peace, security and development of the Indo-Pacific region toward 2025 merits critical attention in the context of Japan- India-U.S. Trilateral dialogue that was held in New York in September 2015 and the inaugural Japan-India-Australia Trilateral dialogue.
Indo-Japan joint declaration should have called for scrapping of agreement between World Health Organisation (WHO) and the International Atomic Energy Agency (IAEA) “WHA 12-40” on 28th May, 1959 that sanitizes information about adverse health impacts of nuclear accidents. Notably, Secretariats of IAEA and WHO keep each other informed about all relevant programmes and nuclear activities. As a consequence of this WHO-IAEA agreement, WHO has lost its autonomy of action in the field of protection from ill effects of radiation. Signing of such agreement by WHO is contrary to its own constitution which states “Informed opinion and active cooperation from the public are of paramount importance for improving the health of people …” As long as the WHO-IAEA agreement exists, WHO’s role with regard to health impact from nuclear accidents and activities will not inspire even an iota of confidence. For WHO to regain its legitimacy, there is a compelling reason for it to remain faithful to Article 1 of its own constitution of WHO which states: “The goal of the World Health Organization shall be the attainment by all peoples of the highest possible level of health.”
Notably, European Committee on Radiation Risk (ECRR) has called for abandonment of the controversial agreement. There were protests against WHO-IAEA agreement at the WHO's 62nd World Health Assembly.
ToxicsWatch Alliance (TWA) and No to Nuclear Energy Forum (NNEF) denounces the subordination of the WHO to IAEA. This appears to aimed at underestimating and misreporting of nuclear risk and radiological emergencies. This agreement is against natural justice and truth.


India, Japan and other countries should urge the General Assembly of WHO in May 2016 to unsign the WHO-IAEA agreement. Indian Government should consider submitting a proposal for inclusion of revision of this agreement in the Agenda to the WHO’s Executive Council in January 2016 and Japan Government should be persuaded to support it to enable WHO to regain its autonomy. Considering the supremacy of people' health over all other interests, there is a compelling logic in seeking revocation or appropriate revision of the questionable agreement.
Share this article :
Labels: anti-people, health, IAEA, nuclear commerce, WHO