They also expressed concern over the harmful effects of the outdated municipal solid waste (MSW) management techniques being adopted by the Punjab government.
Addressing a workshop on MSW management here in Jalandhar, Delhi-based environmentalist and public policy expert Gopal Krishna said the incinerator technology was discarded by western and European countries 20 years ago and had failed in 24 projects set up in India after 1986.
He said opting for the outdated technology could lead to health hazards as dangerous as ‘chemical warfare’.
“The EIA report indicates the plants of dioxins emitting nature being proposed in a residential area unmindful of the fact that pollutants are passengers without passports that would enter the food chain and harm many future generations,” said Krishna.
He said solid waste companies were keen to set up MSW thermal power plants in the state as they were eying a subsidy of Rs 1.5 crore per MW to be issued by the Ministry of New and Renewable Energy for setting up of a waste-to-power plant. However, they would not succeed as the technology had been banned by the Supreme Court due to its harmful effects.
They said the setting up of incinerator-based power plants would bear no results as it was not suitable for the processing of waste produced in Punjab. They said around 78 per cent waste produced in the state constituted inert material (up to 53.9 per cent) and compostable matter (up to 30.84 per cent) which could not produce electricity because of its low calorific value.
“While the chemical composition of solid waste produced in Punjab is up to 1009.90 Kcal only; the waste required to produce electricity should be of calorific value higher than 2000 kcal,” they said.
Environmentalist Balbir Singh Seechewal today joined the movement, launched by SAD MLA Pargat Singh, to transfer the site of a solid waste management plant.
SAD MLA Pargat Singh said, “The state government should check the claims made by environmentalists on the harmful effects of the outdated technology and should also consider the concern of local residents.”


Another environmentalist Sudhir Sharma said a study conducted on people living around 72 incinerators showed that those living in 10 km of an incinerator, refinery and waste disposal site are most likely to have laryngeal cancer and other cancers specifically of stomach, colorectal, liver and lung.

JALANDHAR: Already facing opposition from villagers over setting up of solid waste management plant at Jamsher village of the district, environmental experts have raised more questions on the project at a seminar organized by Jalandhar Cantonment MLA Pargat Singh of the SAD, The MLA is also opposing the plant at the proposed site.

Gopal Krishna of Toxic Watch raised questions not only on the location of the proposed plant, but also compared it to chemical warfare stating it was a "tried, tested and failed" technology.

He pointed out that a white paper issued by the Union ministry of environment and forests (MoEF) had already made it clear that the technology being used for setting up the plant was not suitable for generating power.

"When the technology has already been rejected by the MoEF in the Indian context then why is it being tried here?" he asked. Jalandhar municipal corporation joint commissioner Rajeev Verma was also present during the seminar. 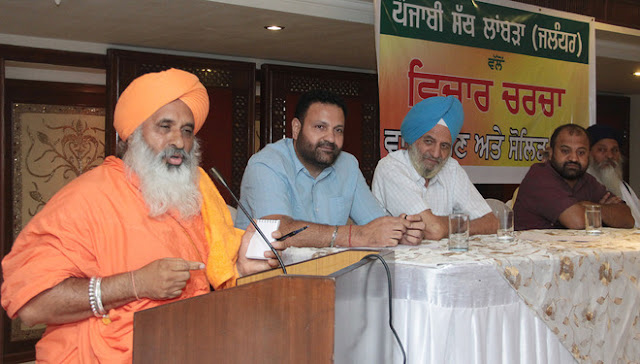 Terming the incinerator technology (burning of solid waste to produce electricity) opted by the Punjab Government to set up thermal power plants in all the eight clusters of state environmentalist and public policy expert Gopal Krishna said, “The state is opting for outdated technology that has been discarded by Western world around 20 years ago.” Also, he said, “The technology is banned by the Supreme Court as due to non segregation of the solid waste, it leads to the emission of the toxic gases like dioxin in the air.”

He also said that if state government goes ahead with the proposed technology, it could have serious implications like that of a ‘chemical warfare’ on the health of the people in the state.

Villagers raise doubts over Environment Impact Survey
Villagers raised serious doubts over the authenticity of environment impact survey conducted by a private consultant in 2011. They said that when they asked consultant about identifying the north direction of the site, they failed to do so in the public hearing held on September 30 in 2011. Also, the consultant failed to reply on the distance of nearest residential area from the proposed site, the distance to nearest Gurudwara, distance of Nanak Pindi village and many other queries pertaining to the facts mentioned in the survey report.

Sperm count reduced to half in 50 years
While revealing the harmful impact of millions of tonnes of solid waste lying untreated in the state, health expert Dr AS Azaad said untreated waste releases toxic emissions in the air that has affected the reproductive system and the physical and mental health of unborn babies in the state. “Various studies have shown that due to various environmental hazards, the sperm count in Punjab has reduced to half in the last 50 years. Also, it has affected the health of unborn children in the mother’s womb,” claimed Azaad. He also said earlier the sperm count was around 113 million that has now reduced to almost half, including dead sperms and also abnormal sperms. He said, “Presently, only 30 per cent sperm are presently effective as compared to the ones 50 years ago.”

Govt should review the technology

Area MLA Pargat Singh said, “There is a dire need to review the incinerator technology being adopted by the state government to save hundreds of villagers from the effect of harmful gases. There is no way villagers will allow the setting up of the thermal power plant in the area. It is high time that the government should either change the site or bring in latest technology approved by the national and international environment agencies.”

Industry too bats for the cause
Apart from the environmentalists and political leaders, noted industrialists from the sports, leather, hand and tool, farmers, sarpanchs of various villages and social welfare organisations participated in the workshop.