With reference to the attached sales contract and my letter dated 23rd September, 2015, this is to inform you that the end-of-life vessel Horizon Trader (IMO No.7326233) has changed its name. It is now called Trader, but it's a dead vessel so there is no tracking. It arrived in Trinidad and Tobago on the 22nd September, 2015 and left for stated destination of Walvis Bay, Namibia. The vessel is expected to arrive at the African continent on November 3rd, 2015. 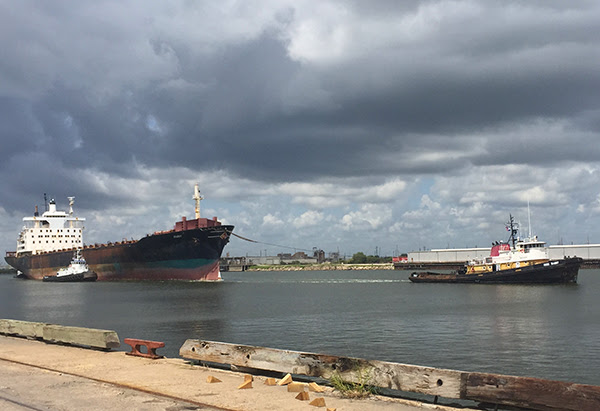 We submit that it is apparent from the sales contract that the owner is liable for breaching clause 4 of the sale contract wherein it promised that it will recycle it in USA and will dispose of its hazardous and other waste materials as per US laws. This 42 year-old US flagged container ship was acquired by when it purchased Horizon Lines in late 2014. A decision was then made to scrap the vessel and it was delivered to the All Star Metals ship recycling facility in Brownsville, Texas in January 2015. The original Horizon Lines Memorandum of Agreement for the sale of the Trader (ex HORIZON TRADER) made it incumbent upon the buyer to responsibly recycle the vessel in the U.S.A.

We submit that following the intervention on the part of Seattle based Basel Action Network and Brussels based NGO Shipbreaking Platform the shipping company has issued a statement saying it has "decided to expressly prohibit recycling of its vessels in this region going forward" referring to South Asian beaches of Alang, India, Chittagong, Bangladesh and Pakistan.

It is noteworthy that the shipping company, Matson, Inc. (MATX) has agreed to prohibit scrapping of its some 23 vessels on the beaches of India, Bangladesh and Pakistan in future but this decision does not address the Trader (ex HORIZON TRADER), an old Matson vessel that is currently on its way to Indian waters.

We submit that our government must act swiftly to ensure that Matson, Inc.(MATX) must be compelled to apply its decision to Trader (ex HORIZON TRADER) as well.

We must recall how disregarding orders it had previously issued regarding the import of toxic end-of-life ships (May 3, 2012) and shipbreaking (July 6, 2012), on July 30, 2012, Indian Supreme Court allowed a notorious 213,000-tonne tanker, once called the Exxon Valdez, into the country for dismantling at the Alang ship-breaking yard. In 1989, the then three-year old, 300-meter-long vessel caused one of the world's worst environmental disasters when it spilled millions of gallons of crude oil in Prince William Sound, Alaska. Since then it has had a chequered history with many owners and name changes including: Exxon Mediterranean and Oriental Nicety. It has sailed under the flags of the U.S., Panama and Sierra Leone; however, it arrived in Indian territorial waters as a flagless ship since the validity of the Sierra Leone certification had expired. The Exxon Valdez contained a cocktail of hazardous substances such as asbestos, PCBs, mercury, arsenic, toxic paints and chemical residues.

We wish to inform you that Supreme Court's fifteen page judgment dated July 30, 2012 by Justices Altamas Kabir and J. Chelameswar in a case brought by ToxicsWatch Alliance had directed that no end-of-life ships will be allowed in Indian waters without prior decontamination in the country of export.

We submit that in compliance of this verdict and India's international obligations no owner of end-of-life ship should be allowed to escape decontamination cost in general and the owner of Trader (ex HORIZON TRADER) in particular.

We submit that export and import of the end-of-life vessel in question is illegal according to national and international laws. Ship owners like Matson, Inc.(MATX) know about the environmental and occupational health impacts of their ship breaking operations on fragile coastal environment like Alang beach. Therefore, there is no rationale and sane logic behind making an exception for Trader (ex HORIZON TRADER).

We submit that these companies in apparent complicity with United States Maritime Administration (US MARAD) and US Environment Protection Agency (USEPA)  have been trying to set a legal precedent for such transboundary movement of hazardous wastes and end-of-life vessels to Indian waters. They tried it in the case of end-of-life vessels SS Blue Lady Platinum II and Exxon Valdez but failed to establish the precedent although the ship remained in Indian waters due to connivance on part of some officials but its illegality was accepted in the Supreme Court and by the Union Ministry of Environment & Forests following our intervention.

We suspect that besides enemies of UN’s Basel Convention on transboundary movement of hazardous wastes and their disposal and Ban Amendment, these US companies in complicity with US MARAD are behind plans to dilute the Ship Breaking Code 2013 to provide for self-certification in matters of verification of documents. Alang being a fake document factory, this tantamount to legalizing illegalities!

In view of the above, we demand that our government must ensure that this foreign end-of-life vessel Trader (ex HORIZON TRADER) returns back to US waters for clean and safe recycling of the vessel the way end-of-life French air craft carrier Le Clemenceau returned to EU waters following an established legal precedent.

This is to draw your urgent attention towards the entry of
end-of-life vessel HORIZON TRADER in Indian waters in violation of
Hon’ble Supreme Court’s order, Shipbreaking Code 2013 and UN’s Basel
Convention on the Control of Transboundary Movements of Hazardous
Wastes and their Disposal.

I submit that the ministry officials ought to ensure that the
end-of-life vessel in question does not present a situation of fait
accompli to the law enforcement agencies by anchoring and beaching
without compliance with the Shipbreaking Code 2013, relevant Hon’ble
Court’s order and Basel Convention.

The HORIZON TRADER, a 42 year-old US flagged container ship was
acquired by Matson when they purchased Horizon Lines late last year. A
decision was then made to scrap the vessel and it was delivered to the
All Star Metals ship recycling facility in Brownsville, Texas in
January 2015.

But instead of being recycled in accordance with U.S. environmental
health and safety laws, creating local jobs, the HORIZON TRADER was
photographed on September 2nd being towed out of the Port of
Brownsville with fresh paint on the ship’s hull masking the true
identity of the vessel. The U.S. Maritime Administration (MARAD) and
the U.S. Environmental Protection Agency (EPA) confirmed that the
HORIZON TRADER was authorized for export to the shipbreaking yards in
India. The ship is currently in the Caribbean Sea.

In pursuance of previous communications regarding ongoing questionable
activities in the shipbreaking industry, I submit that in the present
context and in so far as rule of law is concerned, Basel Convention
alone is valid and relevant to ship breaking industry.

I submit that the ongoing transfer of the end-of-life ships fails to
reflect compliance with Basel Convention’s core obligation -
minimisation of transboundary movements of hazardous waste, and as
such will not prevent hazardous wastes such as asbestos, PCBs, old
fuels, and heavy metals from being exported to the poorest communities
and most desperate workers in developing countries like India. Some of
the most harmful materials from dead ships will enter Indian waters
via a recycling yard, and once it passes through the yard can be
mismanaged or even dumped in the receiving territory – a complete
circumvention of the Basel Convention leaving the likelihood of a
toxic legacy for generations to come.

I submit that while the Basel Convention covers the recycling and
disposal to final disposition. It provides provision for protection to
India that does not exist in any other existing international law.

On behalf of ToxicsWatch Alliance (TWA), I have been working on the
issue of hazardous wastes and ship breaking for over decade. It has
been an invitee and participant in the UN Conventions. It is an
applicant before the National Human Rights Commission (NHRC),
Parliamentary Standing Committee on Science, Technology, Environment &
Forests, Parliamentary Petitions Committee, Parliamentary Standing
Committee on Labour and relevant UN agencies besides Inter-Ministerial
Committee on Ship breaking. It was the applicant before  Hon’ble
Supreme Court wherein the order for creation of the Shipbreaking Code
was passed. TWA had appeared before the Hon'ble Supreme Court’s
Monitoring Committee on Hazardous Wastes, Court’s Technical Experts
Committee on Hazardous Wastes related to Ship breaking and pursued
cases involving famous ships like RIKY (Kong Frederik IX), Le
Clemenceau, SS Blue Lady, Platinum II and Exxon Valdez and others.

TWA appreciates and endorses your ministry’s position in the
inter-ministerial Ship Breaking Scrap Committee, Ministry of Shipping
wherein it was stated that “as a matter of policy they are not in
favour of ship recycling industry breaking foreign ships in the
country.”

I submit that India being a party to the Basel Convention ought to
take the necessary action and maintains its legal competency over
end-of-life ships in order to avoid a toxic legacy for generations to
come.