Legalizes continued dumping and burning of waste as solution, not a problem

At a Round Table on “Politics of Waste Management & Draft Solid Waste Management Rules, 2015 and Draft Plastic Waste Management Rules, 2015” it was decided that Kachra Intzamia Muhim (Waste Management Campaign) will jointly submit comments on them and provide an alternative legal framework to deal with waste crisis. It emerged that both the Rules farmed by Union Ministry of Environment, Forest and Climate Change suffer from poverty of environmental imagination. It fails to underline that Indian solid waste has hazardous waste characteristics. Its faith in building landfills in the sky remains unshaken despite repeated failures in waste to energy projects. It does not factor in the recommendations on Integrated Plant Nutrient Management which had advanced a progressive argument for securing soil nutrients from composts from waste incineration technologies that turns it into pollutants.

Both the Rules fail to aim at reducing plastic use. They fail to provide mechanism for the implementation of Extended Producer Responsibility (EPR). Draft Solid Waste Management Rules fails to take lessons from Suryapet, Telangana and Nammkal in Tamil Nadu where Zero Waste philosophy has been adopted. It refuses to acknowledge and learn from admitted failures in Timarpur and Okhla in Delhi. Draft Plastic Waste Management Rules fails to learn from success in Himachal Pradesh and Sikkim and failures in Delhi and elsewhere. The provision in the Draft Solid Waste Management Rules for the segregation of waste into four categories- bio-degradable or wet waste, non bio-degradable or dry waste, domestic hazardous wastes and construction and demolition waste by the waste generator is noteworthy.  The Draft Rules has extended its jurisdiction. It applies “to every urban local body, all statutory towns, outgrowths in urban agglomerations as declared by the registrar general & census commissioner of India, notified areas/notified industrial townships, notified area committees, area under Indian railways, defense cantonments, special economic zones in the country and every waste
generator.”

If the idea is to seek sites for landfill and waste processing facilities beyond municipal limits then this is likely to have grave political implications. The Rules fails to provide exact criteria for identification for such facilities. The deafening silence of framers of the Draft Rules and the foreign funded NGOs who were involved in it exposes their class bias.

The Rules must make it mandatory for the waste of each district to remain in that very district so that waste does not shift to poorer localities by adopting Not In My Back Yard (NIMBY) syndrome. The Rules must provide for compulsory six monthly public health audit of communities living in the vicinity of waste treatment facilities in general and environmental and occupational health audit of formal and informal workers involved in the waste management. There were serious questions raised about the need for having two separate Rules when plastic is at the focal point for both of them.  The committee on whose recommendations these Rules have been  framed have revealed itself to be a supporter of status quo. It disregards public health in general and environmental and occupational health in particular in its framing. The Rules continues to promote movement of waste from richer areas to poorer areas. It pays lip service to waste minimization, waste segregation, composting but ignores the fact that Ministry of New and Renewable Energy has already distorted waste management by making misplaced combustion technology based energy as the driving concern. It disregards the composition of the Indian waste and promotes burning and burial of waste.

Members of All India Kachra Intzamia Muhim Manch examined the Draft Solid Waste Management Rules, 2015 and Draft Plastic Waste Management Rules, 2015 noted the role which Ministry of Chemicals and Fertilizers is being assigned for supporting composts. Sadly, unmindful of its distorting effect, MNRE provides Rs 1.5 crore/MW for energy generation from waste. No such incentive has specifically been provided.

The Draft Rules provides that CPCB should “review the proposals of state pollution control boards or pollution control committees on use of any new technologies for processing, recycling and treatment of solid waste and prescribe performance standards, emission norms for the same”.   The fact is that CPCB has admittedly failed to review the Chinese technology in question and “prescribe performance standards, emission norms for the same” with no legal consequences. The participants also objected to reference to waste workers as waste pickers in both the Rules.  Although several years have passed waste workers have not been provided legal status despite National Environmental Policy 2006 promise to provide legal status to waste workers. Waste workers provide invaluable environmental service by ensuring resource and material recovery. In such a situation of environmental lawlessness and social injustice, the proposed Rules do not inspire even an iota of confidence.

The Draft Rules mention Metal Recovery Facility (MRF). It ought to have made provision for handing MRF to co-operatives of waste workers. The Rules refer to user fee without clarifying whether it would be based on the quantity or type of waste generated by waste producers. The Rules pay lip-service to incentives for decentralised waste treatment facilities. Its continued reliance on incineration Refuse Derived Fuel Technologies shows that ministry’s love affair with costly centralised facilities for treating and disposing municipal wastes is far from over. 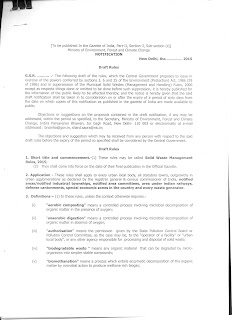 The reference to “viability gap funding” in the Draft Rules drew criticism from participants. This implies that the ministry has envisaged financial support “to be paid to the concessionaire or operator of a solid waste processing facility” in order “partly cover the difference between market price of the output and its production cost plus reasonable profit margin.” The integrated zero waste management waste practices worldwide reveal that saner waste management practices generate both revenue and livelihoods in such a scenario such promotion of public private partnership (PPP) points to a deeply flawed fiscal design.

The Round Table was organized by All India Kachra Intzamia Muhim Manch.

P.S:  TWA has consistently demanded closure of Jindal's incineration based waste to energy plant  in Okhla and is opposed to its mere relocation. The issue is closure of the municipal waste incinerator in the residential and ecologically area in this specific case. It is quite parochial to argue in terms of location alone. It cannot agree with relocation approach especially with regard to municipal waste incinerators. TWA had expressed it even when it was first articulated when RWA in question had filed its writ petition in 2009. We have been demanding closure of the Okhla incinerator since March
2005. It is myopic to articulate the demand in terms of shifting a POPs & heavy metals emitting municipal waste incinerator plant.  The Draft Solid Waste Management Rules, 2015 promotes status quo. RWA in question must pay heed to the proposed Rules before articulating its stance on incineration based WTE plants. Scientific literature on POPs & heavy metals has established that they
are long distance travellers and they do not require passport to travel. Its a sad commentary on how RWAs conceptualize municipal waste management. How can waste of Okhla, South Delhi district be shifted elsewhere in poorer localities as a a sane waste management practice. In fact in one particular meeting at Union Ministry of Environment, Forests & Climate Change (MoEFCC), the RWA's position on shifting of location of this plant in question was demolished by one MoEFCC official at a meeting convened on the orders of Jairam Ramesh, the then Environment Minister by referring to Master Plan documents of Delhi. In order to respond to him, TWA was asked by RWA representatives to advance arguments against the incinerator technology at that meeting. Such position has led to setbacks for RWA before Delhi High Court and now the NGT. But tactically TWA agrees to disagree and still work to ensure closure of waste incinerator.
Share this article :
Labels: 2015, All India Kachra Intzamia Muhim Manch (AIKIMM), Draft Plastic Waste Management Rules, Solid Waste Management Rules