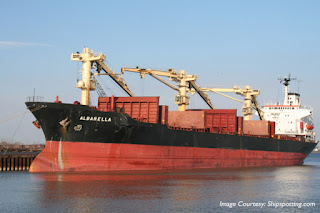 Pursuant to my communication to Indian Coast Guard dated 23rd June, 2015, this is to draw your attention towards the entry of a dubious foreign ship CHENG (ex-Albarela), IMO No. 8115332 which entered Indian
waters some 35 days back citing failure of its generator.

I submit that this ship remained at Gopnath anchorage, Gujarat for some 25 days without official permission. I have learnt that some 10 days back following the permission of Alang Port Officer, it was
allowed to be shifted to Bhavanagar anchorage, Gujarat on humanitarian grounds. This ship was built in 1983. Its port of registry is Kingstown. It is carrying the flag of St. Vincent & The Grenadines.

I have learnt that it is not clear as yet as to whether the ship is a cargo or an end-of-life ship meant for dismantling.

It is not clear whether this ship submitted Pre Arrival Notification of Security (PANS) to jurisdiction port, Indian Coast Guard and Indian Navy at least 96 hours in advance before entering from foreign port.

I submit that it is not clear whether there was prior informed consent taken before entering Indian Exclusive Economic Zone (EEZ) and Search and Rescue Region (SRR).

ToxicsWatch Alliance (TWA) has been working on the issue of hazardous wastes and ship breaking for over decade. It has been an invitee and participant in the UN Conventions. It is an applicant before the
National Human Rights Commission (NHRC), Parliamentary Standing Committee on Science, Technology, Environment & Forests, Parliamentary Petitions Committee, Parliamentary Standing Committee on Labour and relevant UN agencies besides Inter-Ministerial Committee on Ship breaking. It was the applicant before Supreme Court wherein the order for creation of the Shipbreaking Code was passed. TWA had appeared before the Supreme Court’s Monitoring Committee on Hazardous Wastes, Court’s Technical Experts Committee on Hazardous Wastes related to Ship breaking and pursued cases involving famous ships like RIKY (Kong Frederik IX), Le Clemenceau, SS Blue Lady, Platinum II and Exxon Valdez and others.

On behalf of TWA I submit that there have been several instances wherein such foreign ships have been abandoned in Indian waters. Such instances set very dangerous precedent and opens flood gates for such
dead and dubious ships due to conniving and complicit officials. It is high time a high level probe unearths the rot and sets it right before it is too late.

While Indian Coast Guard and Naval Intelligence have consistently raised security concerns from the entry of foreign ships, the role of other agencies of the state and central government appear to compromise country's maritime and environmental security disregarding fragile coastal zones of Bhavnagar, Gujarat.

In view of the above, I seek your urgent intervention to examine the matter and set matters right.