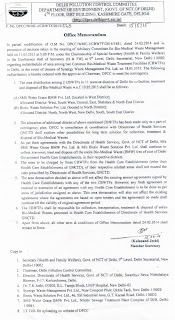 The case against Chief Secretary, Government of NCT of Delhi and Managing Director, M/s Synergy Waste Management Pvt Ltd was disposed off on 28th May, 2015 following closure of Bio-Medical Waste Incinerator located in the vicinity of DDA Flats, Sukhdev Vihar, Okhla, New Delhi due to expiry and non-renewal of its license after 18th May, 2015. In a remarkable move, Delhi Government had kept itself ready to face this situation. It illustrates how peoples’ resistance can compel the government to listen to them. 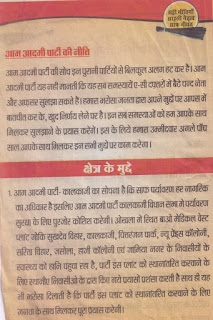 An Office Memorandum (OM) dated 15th May, 2015, Delhi Pollution Control Committee (DPCC) shows that the state government had planned for “redistribution of area among two common bio-medical waste treatment facilities (CBMWTFs) in Delhi, in the vent of closure of Synergy Waste Management Pvt Ltd. on 18.05.2015.” The OM was signed by Kulanand Joshi, Member Secretary, DPCC. The OM is attached. This was an outcome the meeting residents had with Delhi Chief Minister Arvind Kejriwal.

It is noteworthy that the attached Aam Aadmi Party (AAP)’s manifesto for Kalkaji had recognized the public health concerns emanating from this polluting plant and had promised to make efforts and struggle with Okhla residents against it.

After Delhi High Court's judgment dated 15th January, 2013 established the adverse health impacts from the incinerator based on existing medical literature, the fate of M/s Synergy Waste Management Pvt. Ltd. (SWMPL) which operated Bio-Medical Waste Incinerator located in the vicinity of DDA Flats, Sukhdev Vihar, Okhla, New Delhi was sealed. This order had come in response a Public Interest Litigation (PIL) was filed in 2008 seeking its closure. But when Chief Secretary, Government of NCT of Delhi and Contemnor no.1 and Neeraj Agarwal, Managing Director, M/s Synergy Waste Management Pvt Ltd, Contemnor No.2 did not comply with the order in contempt of this Court’s Judgment, a Civil Contempt Petition was filed. A review petition No. 111/2013 filed by the company was dismissed on 27th February, 2013.

The High Court judgment refers to 'The summary of "Epidemiological Studies on Adverse Health Effects Associated with Incineration" would show that medical waste incinerators are a leading source of dioxins and mercury in the environment and there is link between incinerator emissions and adverse health impacts on incinerator workers and residents living around the incinerators.'

The observations made in the judgment will have far reaching implications. It reads: "Both older and more modern incinerators can contribute to the contamination of local soil and vegetation with dioxins and heavy metals. In several European countries, cow"s milk from farms located in the vicinity of incinerators has been found to contain elevated levels of dioxin, in some cases above regulatory limits. Increased levels of dioxins have been found in the tissues of residents near to incinerators in the UK, Spain and Japan. At an incinerator in Finland, mercury was increased in hair of residents living in the vicinity. Children living near a modern incinerator in Spain were found to have elevated levels of urinary thioethers, a biomarker of toxic exposure. " It notes that "After 2 years of operation of incinerator, dioxins levels were found increased by about 25% in both groups living between 0.5 to 1.5 and 3.5 to 4.0 km away (201 people) of people. In the repeat analysis, the increase was in the range of 10-15%".

The struggle of residents and environmental groups is far from over. The judgment is quite relevant for the upcoming hearing in the National Green filed by the resident’s welfare association (RWA) of Sukhdev Vihar, Okhla against the municipal waste incineration power plant is being operated by Delhi's Timarpur-Okhla Waste Management Co Pvt Ltd (TOWMCL) of M/s Jindal Urban Infrastructure Limited (JUIL), a company of M/s Jindal Saw Group Limited.

ToxicsWatch Alliance (TWA) has been demanding closure of waste incinerators plants because shifting a polluting unit of factory does not make it non-polluting. Responding to a letter of TWA Union Environment Minister, Prakash Javadekar has promised to look into the possibility of Bhopal like disaster due Jindal’s plant in Okhla operating admittedly in residential areas without any Disaster Management Plan using unapproved and untested Chinese technology.

Meanwhile, National Human Rights Commission (NHRC) is pursuing Case No.  8296/30/10/2014 filed by TWA which  has been campaigning against this toxic Dioxins emitting plant since 2005 and is pursuing a case against the toxic threat from municipal waste incinerator plants in Okhla, Narela-Bawana and Ghazipur.

Notably, owing to public health concerns, Delhi’s Deputy Chief Minister has visited the hazardous Dioxins emitting plants in Okhla and Ghazipur. It is high time the government in the national capital territory revised the tried, tested and failed approach adopted for waste management.

The article you've shared here is fantastic because it provides some excellent information that will be incredibly beneficial to me. Thank you for sharing that. Keep up the good work. Best Waste Management Company In India