The ‘Task Force’ on Interlinking of Rivers constituted by Ministry of Water Resources, River Development & Ganga Rejuvenation comprises of former and serving government officials .Chairman of the Task Force B N Navalawala is former Secretary, Union Ministry of Water Resources.Although water is a state subject, there is no representation from the States in the Task Force. Several States are opposed to the mega project. 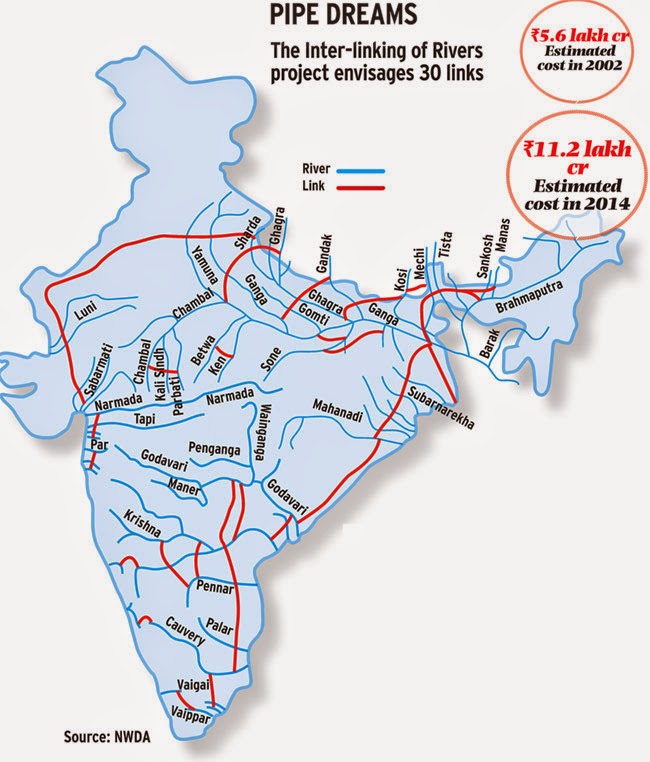 The expert member of the Task Force Sriram Vedire is a Adviser in the Ministry of Water Resources, River Development and Ganga Rejuvenation. Other members include Prodipto Ghosh who is former Secretary, Ministry of Environment and Forests, A D Mohile, former Chairman, Central Water Commission (CWC) and M Gopalakrishnan, former Member, CWC. Additional Secretary of the Ministry of Water Resources, Chairman, Central water Commission, Director General, National Water Development Agency and Joint Secretary (Finance), in the Ministry of Water Resources are the other members of the Task Force. Virag Gupta, an advocate who has been made a expert member of the Task Force represented K.N. Govindacharya, former Bharatiya Janata Party leader and ideologue in the court. Almost of all of these members are advocates of ILR project and have paid least regard to Aral sea like disasters in public debate.

In 2004, Ministry decided to undertake comprehensive assessment of feasibility of linking of rivers. NWDA had requested all the state governments to identify the intrastate link proposals in their states and send details to NWDA for their prefeasibility / feasibility studies. Bihar responded to NWDA's request vide letter No. PMC-5(IS)-01/2006-427, Patna dated May 15, 2008 and had submitted its proposal. a meeting was held between the officers of the Water Resources Department (WRD), Govt. of Bihar and NWDA on June 16, 2008 in Patna. In the meeting, Govt. of Bihar requested NWDA to prepare the prefeasibility report of six intrastate links out of which four were flood moderation schemes. The Burhi Gandak-Noon-Baya-Ganga Link is one of them. NWDA prepared the pre-feasibility report (PFR) of Burhi Gandak-Noon-Baya-Ganga Link and submitted to the Govt. of Bihar in May, 2009. A meeting was held on January 18, 2010 between officers of WRD, Govt. of Bihar and NWDA. In the meeting, the State Govt. desired the preparation of the DPR of Burhi Gandak-Noon-Baya-Ganga link project as the scheme was found viable in the PFR stage. It was also decided that NWDA could go ahead with preparation of DPR directly to save time instead of first  preparing the Feasibility Report(FR) and   then DPR. NWDA directly took up the work of preparation of the DPR of the above link canal project.

In the 27th AGM meeting of NWDA held on March 31, 2012 wherein, Water Resources Minister, Govt. of Bihar requested NWDA to prepare the Preliminary Project Report (PPR) of Burhi Gandak-Noon-Baya-Ganga link project on priority. After carrying out detailed topographical surveys and firming up the techno-economic viability of the project, NWDA has prepared PPR of Burhi Gandak-Noon-Baya-Ganga link project as per the CWC guidelines for submission, appraisal and clearance of irrigation and multipurpose projects- 2010 and submitted to Govt. of Bihar and Central Water Commission (CWC) during May, 2012 for examination.  The PPR of the project was duly examined by CWC and comments thereon received from CWC were discussed with the officers of WRD, Govt. of Bihar during meeting taken by Principal Secretary, Govt. of Bihar on January 16, 2013.

The DPR of the project has been prepared by NWDA based on detailed surveys & investigations and considering suggestions/views of WRD, Govt. of Bihar and observations of CWC. Responding the query posed by TWA, one NWDA official expressed his agreement with the objection but contended that DPR of Burhi Gandak-Noon-Baya-Ganga link project was prepared at the insistence of Government of Bihar. He also informed that financial allocations have already been made for the same. However, he opined that if NWDA is presented with facts it can re-consider its recommendations. TWA was assured by Ministry officials that these objections will form part of its proceedings.
Like the Task Force of 2002, this Task Force too has been assigned task of expediting the work on interlinking of rivers in the Country. Apart from examining the existing links that are laid out as per the National Perspective Plan under both Himalayan and Peninsular components.

The ministry's statement stated that "the task force would also consider alternative plans in place of infeasible links in the present plan."

The Task Force is supposed to facilitate interlinking of intra-state and intra-basin Rivers also along with that of inter-state and inter-basin links. The Task Force is supposed to recommend the time schedules for completion of feasibility studies and DPR’s of all the links, implementation schedule of all the links and also suggest on various means of funding mechanisms for the Interlinking of Rivers. The Task Force is supposed to provide guidance on norms of appraisal of individual projects in respect of economic viability, socio-economic, environmental impacts and preparation of resettlement plans. It is quite astounding and bizarre that although the National Perspective Plan under both Himalayan and Peninsular components has been around for several decades, there has not been any cumulative environmental and social impact assessment of the ILR project so far.

The Task Force has been asked to "device suitable mechanisms for bringing about speedy consensus amongst the states and also propose suitable organizational structure for implementing the Interlinking of Rivers. The Task Force would also try to forge a consensus amongst the states in order to take forward the speedy implementation of the Interlinking of Rivers Program." This reveals that there is no consensus and unanimity among the states. Despite such official admission Hon'ble Supreme Court has been misled into inferring repeatedly since 2002 till 2012 that there is consensus and unanimity among the states for the ILR project.
Share this article :
Labels: Watershed and River Basins

Great Article. Thank you for sharing! Really an awesome post for every one.

IEEE Final Year projects Project Centers in Chennai are consistently sought after. Final Year Students Projects take a shot at them to improve their aptitudes, while specialists like the enjoyment in interfering with innovation. For experts, it's an alternate ball game through and through. Smaller than expected IEEE Final Year project centers ground for all fragments of CSE & IT engineers hoping to assemble. Final Year Project Domains for IT It gives you tips and rules that is progressively critical to consider while choosing any final year project point.