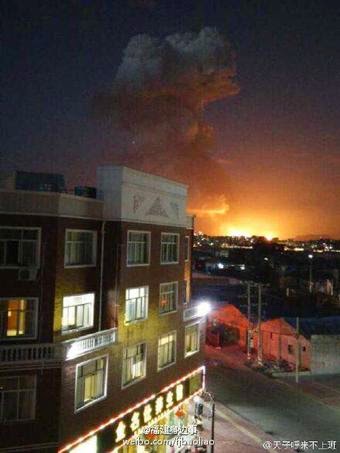 A massive blast occurred at a paraxylene plant in Zhangzhou City in China’s Fujian Province in the evening hours on April 6, 2015. Paraxylene, or p-Xylene, is a mildly toxic hydrocarbon used in polyester manufacturing. Some 29,096 people were evacuated due to chemical plant fire. Firefighters extinguished fire at a chemical plant on the Gulei Peninsula in Zhangzhou, southeast China's Fujian Province apparently on April 8, 2015. State run Xinhua reported that oil leaked from the plant and caught fire and led to blasts at three nearby chemical oil tanks at Tenglong Aromatic Hydrocarbon (Zhangzhou) Co. Ltd. on the city's Gulei Peninsula.  It was the second accident in 20 months at the same plant, which produces paraxylene (PX), an industrial chemical used for making fiber and plastics. Six people were injured in the accident.An emergency headquarter has been set up after the explosion  including environmental, maritime and meteorological experts to monitor readings of poisonous gas, toxic chemicals and industrial sewage.  "no significant harm to the natural environment due to the explosion has been detected so far", according to a Xinhua report. Qin Tianbao, an environmental protection expert at Wuhan University, said that even though paraxylene has low toxicity, building such plants should be strictly regulated after an environmental assessment and public review.

The plant was built in 2009 and was initially slated for the city of Xiamen in the same province, but was relocated after protests over potential environmental problems. The project cost was estimated at $2.3 billion. Zhangzhou is a city in the coastal Fujian Province in southern China. The Paraxylene (PX) plant had suffered a powerful fire and explosion back in July 2013, when a hydrogen pipe ruptured during a pressure test. There has been reports about casualties and injuries.
Share this article :
Labels: Environment and Occupational Health, Hazardous Industries

I just needed to record a speedy word to express profound gratitude to you for those magnificent tips and clues you are appearing on this site.
safety course in chennai