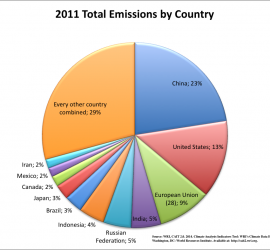 ‘Intended Nationally Determined Contributions ( INDCs)’ as mitigation actions and adaptation actions to fight climate change under the 2015 agreement are all set to be presented as voluntary targets by all countries before the annual meeting in Paris. The 13 days of negotiations for a new UN climate agreement  with 196 countries concluded on the morning of 14 December, 2014 in Peru with "Lima call to climate action" for 2015 agreement amidst acknowledgement of differentiation between rich and poor countries

The negotiations will continue in February 2015. The first draft of the negotiating text is likely to be ready by June 2015. By December 2015 at Paris agreement would have been reached.

Hopefully, the provision for payment for loss and damage caused by inaction of the developed world to reduce emissions as demanded by the poorest countries will find its place in the final agreement besides  the provision for financing and technology for the mitigation and adaptation actions.

The pace and content of the talks do not reflect that the national governments have been able to liberate themselves from the vice like grip of corporations, the real culprits of climate crisis. Undemocratic organisations and their unnatural market forces are structurally insensitive to global environmental crises.
Share this article :
Labels: climate crisis