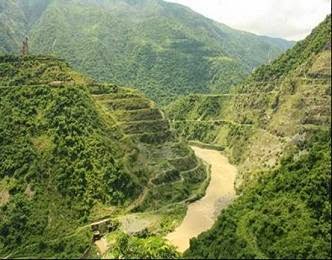 Officially, Lakhwar Project is a multipurpose scheme, primarily a peaking power station, on river Yamuna in the district of Dehradun in Uttarakhand. The scheme envisages construction of 204 m high concrete dam on river Yamuna near Lohari village. The Multipurpose scheme also envisages construction of Vyasi HEP (2x60 MW) (Hathiari power station) downstream of Lakhwar HEP. The scheme also includes construction of a barrage at Katapathar about 3 Km downstream of Hathiari power station (Vyasi HEP) on river Yamuna. The inflow and stored water in Lakhwar and Vyasi reservoir after generation of power at Lakhwar underground power house and Hathiari surface power house will be balanced at Katapathar barrage for downstream uses. The project with a proposed installation of 300 MW (3 x 100 MW) is envisaged to generate an annual energy generation of 612.93 MU in a 90% dependable year.

Under the then Uttar Pradesh Irrigation Department, a 420-MW Lakhwar-Vyasi hydroelectric power project was granted environmental clearance in 1986. Following which work continued till around 1992. This project is currently under the Uttarakhand Jal Vidyut Nigam Limited (UJVNL). The projects was divided into two projects- a 120-MW Vyasi project and a 300-MW Lakhwar project. Subsequently, environmental clearance for the Vyasi project was applied for.

The Expert Appraisal Committee for River valley and Hydroelectric Projects considered the Lakhwar project in November 2010. EAC raised questions about the construction of a barrage and other issues, which are yet to be resolved. Notably, no Environmental Impact Assessment (EIA) report for Lakhwar project was prepared. As a consequence there is no Environment Management Plan and no monitoring.
After the Court’s order, a committee was formed by the MoEF in October 2013 to “assess whether the existing and ongoing/under-construction hydropower projects have contributed to the environmental degradation and, if so, to what extent.”

Lakhwar Dam is a gravity dam currently under construction on the Yamuna river near the town of Lakhwar. The primary purpose of the project is hydroelectric power generation and it will support a 300 MW power station when complete. In conjunction with the dam, the Vyasi Dam and 120 MW Hathiari Power Station will also be constructed downstream.

As per the project plan, Katapathar Barrage will be built downstream of the Vyasi Dam to provide for irrigation and water supply. It first received environmental clearance in 1986 and construction on the 204 m tall dam began in 1987 under the supervision of the Uttar Pradesh Irrigation Department. The construction restarted on the project in November 2013. It is expected to be completed in 2016.

Uttarakhand Chief Secretary has claimed that the 1986 clearance was still valid. Therefore, Court’s order is not applicable to the project. The fact is court’s order has been violated with no consequence to the violators so far.