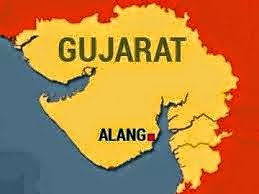 The Indian authorities goes into the matter on the ship Clipper Concord to be scrapped in a notorious beach
Thomas Gösta Svensson, Kristian Kornø


If the Danish shipping company Clipper Group believed that they could peacefully send the ship Clipper Concord for scrapping at the infamous Indian Alang beach (Gujarat), they went horribly wrong.
After Ekstra Bladet last week reveal that the ship had arrived at Alang, has Clipper Group received harsh criticism from various grassroots organizations and from the Environment Kirsten Brosbøl (S) - and now the Indian authorities have also begun to interfere in the matter.

It happens after the Indian NGO Toxics Watch Alliance (TWA) right now trying to prevent the ship at anchor in the Arabian Sea ten nautical miles (18.5 kilometers ed.) From the coast, from entering the mainland.
You can follow Clippers position here

TWA believes that Clipper Group breaks with Indian law and the Basel Convention on sending hazardous waste to non-OECD countries. It says Gopal Krishna told Ekstra Bladet and stresses at the same time that 500 workers have been killed in ship breaking industry in Alang from 1983 until December this year. I have therefore contacted the Indian Environment Minister Prakash Javadekar regarding Clipper Concord, and he replies that he will do what is necessary. In addition, the Office of the United Nations High Commissioner for Human Rights and the UN Special Rapporteur for Human Rights and hazardous substances Baskut Tuncak, initiated an investigation, and I hope it will succeed in slowing down the ship and sent it out of Indian waters, he said.

Ekstra Bladet could last week also reveal that Baron Johan Wedell-Wedellsborg shipping company since 2011 has sent four ships to be scrapped on the notorious beach in Alang in India, changing the company now practice.

It tells the CEO of Dannebrog Rederi, Johnny schmoelker, Ritzau:
- It's not going to happen again. We recognize that we could have done better, and we will put our backs to do now. Therefore, we sit down and write a formal scrapping policy that in all things follow the Hong Kong Convention.
- And we go in collaboration with Shipowners Association about it. It will apply to all companies in Weco Group, he says.